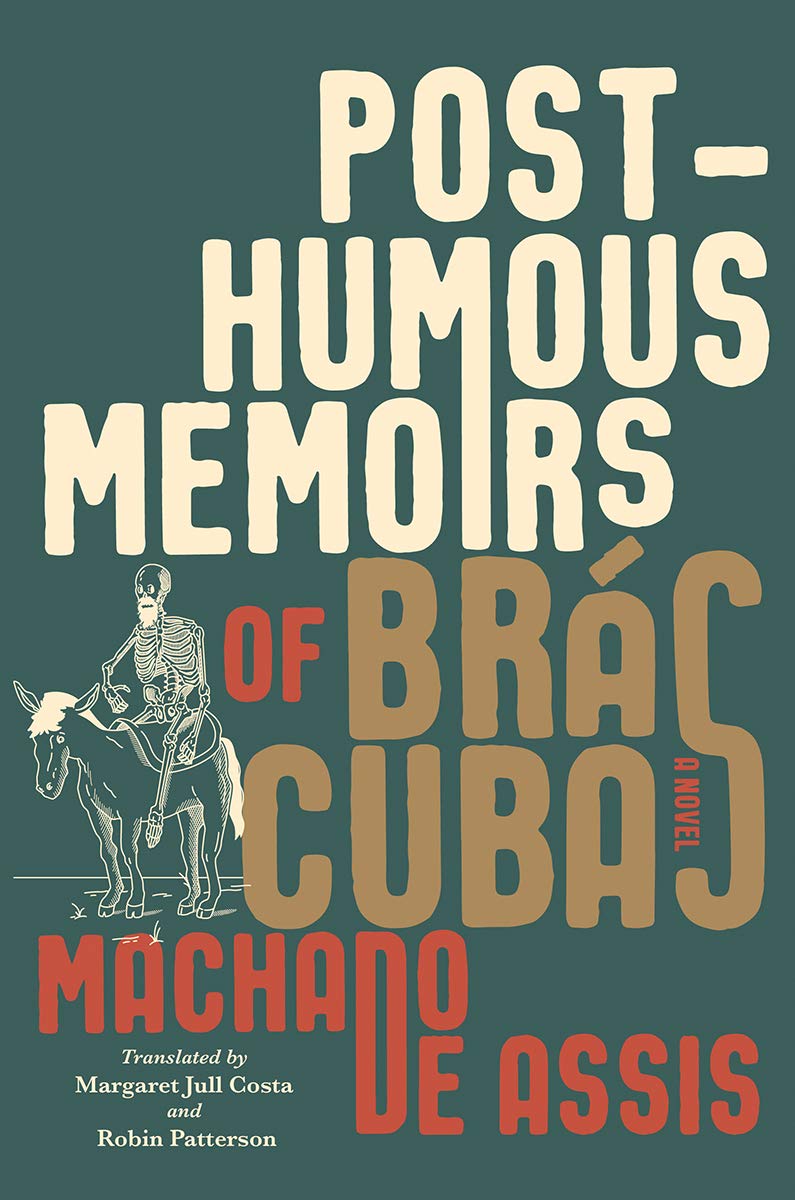 Joaquim Maria Machado de Assis was born in 1839 in Rio de Janeiro. The grandson of freed slaves, he spent his life in letters – working for newspapers and founding the Brazilian Academy of Letters as well as writing all his books and learning several languages on the side – and is widely considered the greatest Brazilian writer, with the country’s most important literary prize being named after him. Even the crusty literary critic Harold Bloom had to admit Machado de Assis into his pantheon of great writers. This pomp, however, is misleading. Far from being inaccessible or stale, the Machado de Assis that appears on the pages of Posthumous Memoirs of Brás Cubas is caustic, ironic and funny. That is, his writing is a joy to encounter.

Previously translated into English in the 1950s with the title Epitaph of a Small Winner – for reasons that are obscure – the book (originally published in 1881) has received two new translations this year. The one we are concerned with here is given life in English by Margaret Jull Costa and Robin Patterson, who also recently translated the collected stories of Machado de Assis. The team of translators do not go out of their way to make the book seem “modern,” as can happen with disastrous results when translators do not trust the power of a text to connect with readers across time. Rather, they allow the voice of Brás Cubas – and, by extension, Machado de Assis – to take a shape natural to its time. To say the book reads like it was written yesterday would be a disservice; it’s much better than that.

The story, such as it is, concerns the titular character’s life – all of it – from death to birth and back again in short chapters that are sometimes little more than musings or anecdotes. Such a book is not unusual, but as the title suggests, the position of its teller is. Brás Cubas writes from beyond the grave, revealing on the first page (after a brief preface and an opening paragraph) that he “passed away at two o’clock in the afternoon on a Friday.” This matter-of-fact tone is sustained throughout the book, working equally well in comedic moments like this one and in more somber moments, such as the death of almost anyone else in the text, whose stories pass beyond our reach once they diverge from Cubas’s.

The life of Brás Cubas is not quite uneventful – that might make it exceptional in its own way – but, rather, lifeless. Life happens to him, not the other way around. The dead man, looking back, seems to contain within him more spark and verve than he ever did while living. Those looking for a “likable” character – whatever for? – will be disappointed in Brás Cubas. He is greedy, whiny and prone to petty cruelties. He decides not to pursue a romantic interest when he discovers she walks with a limp. He negotiates down in his head the reward he will give a man who saved his life – from several gold coins to a single silver one – and then regrets even that price when he sees how overwhelmed the Samaritan is by it. He carries on a decades-long affair with a woman under the nose of her husband who considers him a friend.

But to cast Cubas as a villain would be wrong. He faces his share of tragedy – in the midst of the affair his mistress becomes pregnant with his child and then miscarries – not that such things redeem his own wrongdoing. He is capable of showing kindness – even love – is apparently excellent at the waltz and writes works that are admired widely in the upper crust of Rio society he circulates in. In fact, what makes him a guide worth following through his life are his observances of this society, which is full of people as shallow as he is, but coupled with the dread quality of ambition. His observations of the vapidity, cowardice and hypocrisy of colonial Brazil’s elite – even as he partakes in it – might lead the reader to conclude that such people are the same in our own time and place as well, even if the specifics are different.

Piquancy is not the book’s only register, though. As it moves through Cubas’s life the novel becomes more blatantly philosophical, further complicating its novelistic and memoiristic qualities. Some of this is to do with Cubas’s friendship with – or, more accurately, pupilage under – Quincas Borba (the subject of another of Machado de Asiss’s works), the inventor of a neo-nihilistic brand of philosophy he calls Humanitism. The speculations of this philosophy tie the more-than-a-little-dull Cubas in knots. But he follows along as he does in every other area of his life: not quite understanding, but trusting that things won’t go too badly for him if someone else is in charge.

As it comes to a close, the question the book implicitly asks is this: what is the point of life? Cubas, in his cynical, but playful fashion, makes in a little over 200 pages a case both for and against existence, but closes with an ironic, sour note. After suggesting that on a moral scale, his life would wind up being judged in balance – neither good nor bad – he is surprised to find in the afterlife a small balance in favor of the good. The book closes with a sentence explaining why: “I did not have children, and thus did not bequeath to any creature the legacy of our misery.”

While the final sentiment is sure to challenge the reader, the book that comes before it is so pleasurable as to make the challenge a welcome one. Of what worth is life? Especially the life of a bore like Cubas. The book is a memento mori with a rictus grin.

Roomful of Teeth: The Ascendant/Just Constellations