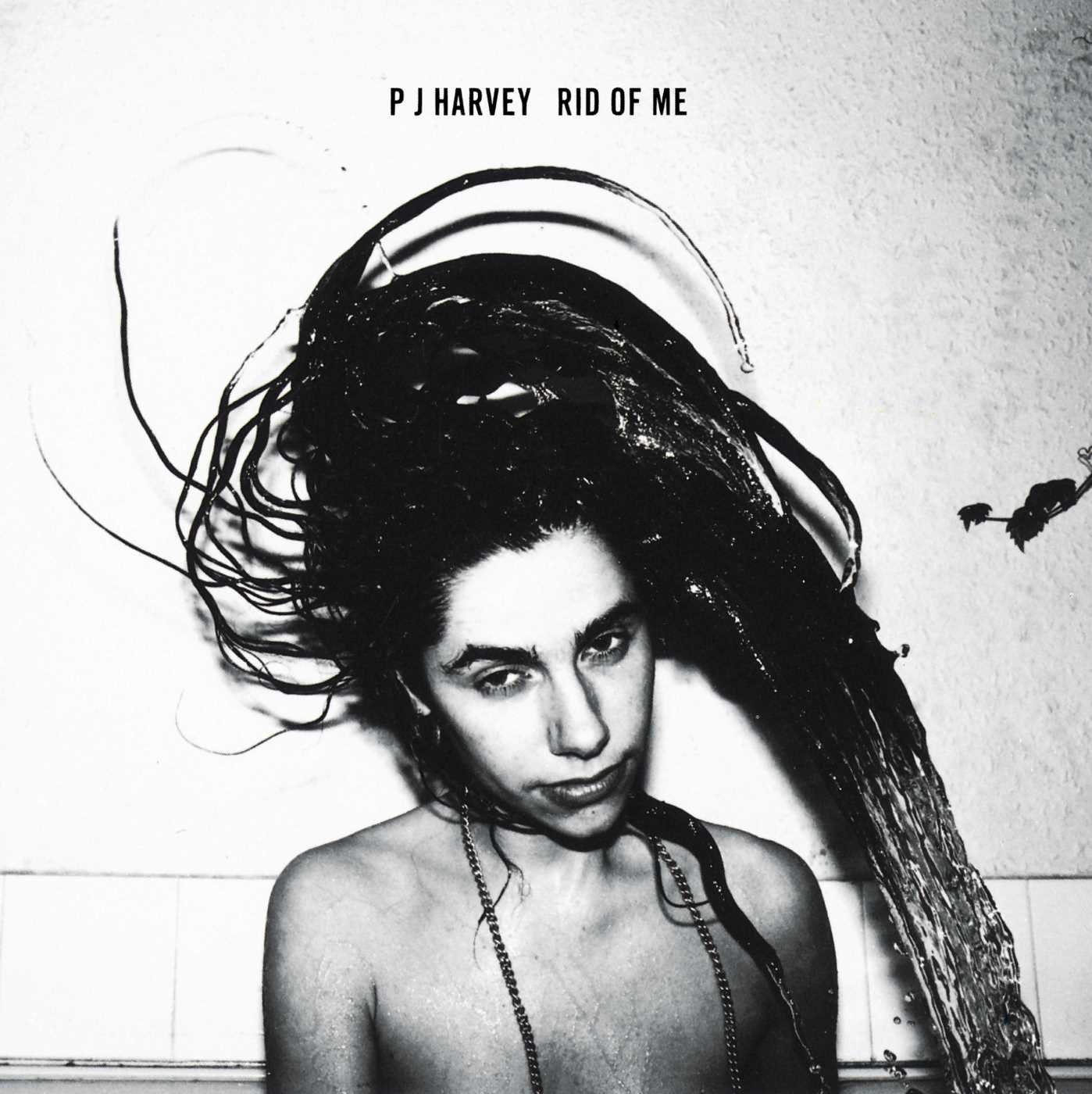 “Hips. Lips. Tits. Power,” read the cover of Q’s May 1994 issue. Beneath the loutish headline was a picture of three of the most incisive new songwriters, of any gender, of the previous few years: PJ Harvey, Björk and Tori Amos. By the time writer Adrian Deevoy sat the “gleesome threesome” down for a group interview, they had recorded five albums among them, which should have been enough for Deevoy to see each musician as their own artist before he even turned on his tape recorder. (“We have tits. We have three holes. That’s what we have in common,” said Amos, rebuking the tendency of journalists—and men—to lump women together whilst pitting them against each other.) Eventually, Deevoy turns to the topic of sex (or, as Amos prefers to think of it, sexuality) and the role it played in their work. Up until this point in the interview, Harvey has largely kept quiet, engaging more with her peers than the journalist. “For me, music is something that is very sexual,” she says. “It’s not something to do with your head, it’s to do with your body, which is a very sexual instrument. To bring sexual instruments into the lyrics to go with the music just makes perfect sense to me.”

Perhaps it’s reductive to say that PJ Harvey, on her earliest records, sang about sex. Elvis Costello, in praise of Rid of Me, proclaimed that most of Harvey’s songs “seem[ed] to be about blood and fucking”—an assessment that Harvey laughed off. But there is some truth in what Costello said: Harvey didn’t sing about sex, at least in the same way that Björk and Amos did, so much as she sang about fucking—sex as a projection of desire rather than power.

Dry and Rid of Me, Harvey’s first two records—reissued on vinyl earlier this summer, along with separately-released albums of demos—were the only ones that Harvey made with bassist Steve Vaughan and drummer Rob Ellis, and they remain the rawest albums in her catalog. They’re also her bluesiest, the ones that sound most akin to the Captain Beefheart and Rolling Stones albums she grew up listening to, and her most lascivious, depicting sexuality in such gruesome, violent detail that even Mick Jagger would blanch at a song like “Rub ‘Til It Bleeds.” If Harvey’s musical career had ended with the breakup of the PJ Harvey Trio, we’d still be talking about Dry and Rid of Me, just not as the building blocks of one of the most formidable discographies of the last 30 years. 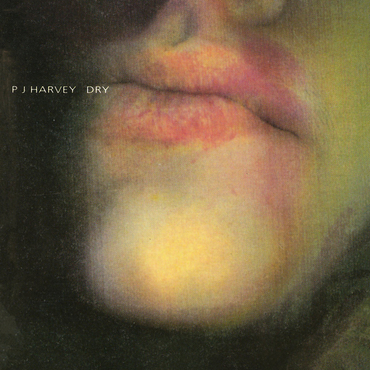 From its opening lines, Dry announced itself as one of the most singular debut albums of the ‘90s. “Oh, my lover/ Don’t you know it’s all right?” Harvey drawls in her southern English accent. “You can love her/ And you can love me at the same time.” More than a few critics tried to frame Dry as some sort of feminist statement, something that Harvey always denied; several months after Dry’s release, Bikini Kill released their seminal debut EP, on which Kathleen Hanna railed against the evils of capitalism and the patriarchy. Dry, on the other hand, starts with a song about being so desperate to keep your man that you’ll let him chase after someone else, and its lead single told the story of a woman trying, unsuccessfully, to woo a man with an uncomfortable dress. The closest Dry comes to riot grrrl, in sound if not lyrical content, is on “Sheela-Na-Gig,” named for the Celtic carvings: After swiping a line from South Pacific (“Gonna wash that man right out of my hair”) Harvey vows to “take my hips”—her “child-bearing hips”—“to a man who cares.” She’s not going to sing “Jolene” anymore, but she’s still sexualizing herself so as to win the attention of a man.

It makes much less sense to think of Dry as some sort of response to riot grrrl—especially given how far removed Harvey was from the scene—than to consider the album as its own unique object, bred of its own unique influences. “Sheela-Na-Gig” (which, if you turn your ear right, bears a passing resemblance to “Smells Like Teen Spirit”) and “Dress” would have sounded right at home on Alternative Nation, but Dry splits the difference between blues and punk. Songs like “Oh My Lover,” “Hair” and “Water” are a bit slower but no less aggressive than your typical grunge song—or, for that matter, your typical blues song. And it’s important to note that at this point, PJ Harvey was a band in addition to the name of the frontwoman, with Vaughan and Ellis’ rhythm section going a long way to transform “Dress,” “Victory” and “Fountain” into something lumbering and moody. 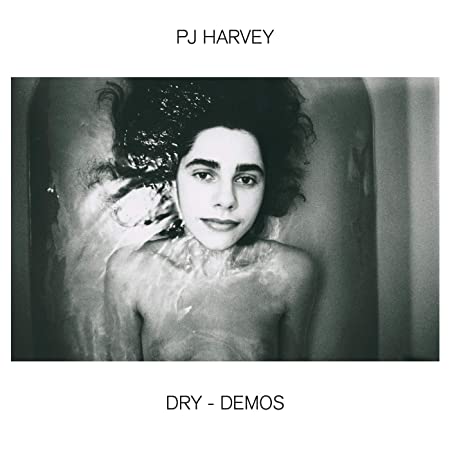 Upon its initial release, the first several thousand copies of Dry came with a disc of demos, and for the first time those recordings are being widely released. Dry – Demos differs from Harvey’s 4-Track Demos (also reissued) in that it keeps the same track listing as the final album, and that the acoustic guitar features as prominently as the electric guitar. For the most part, it sounds like what you’d expect an album of demos for Dry to sound like. It’s got a stronger blues feel to it—Harvey might as well have recorded these takes in a shotgun shack along the Mississippi River—but the songs on Dry – Demos unsurprisingly lack the rhythmic heft of the finished versions, with Ellis barely contributing and Vaughan seemingly out of the room.

Arriving just a year after Dry, Rid of Me is held up by many of Harvey’s fans as her masterpiece, and with good reason: It’s the album where Harvey declares herself “king of the world,” the one where she turns Bob Dylan’s “Highway 61 Revisited” into a mangled sonic car crash, the one where she threatens to rub her man’s manhood raw and makes it sound like a come-on. After a nervous breakdown, Harvey channeled her exhaustion and desperation into the most intense and unsettling songs she’d ever write, then spent two weeks in the studio in rural Minnesota, in the dead of winter, with producer Steve Albini. But despite Harvey’s headspace when writing the songs on Rid of Me, she rebutted the idea that they were confessional or autobiographical. Speaking to The Guardian several months after Rid of Me hit shelves (in an article that likened her to a “screeching harridan” and a “feminist heroine”), Harvey said “I would have to be 40 and very worn out to have lived through everything I write about.”

And, quite possibly, in prison. Bookending the aforementioned “Rub ‘Til It Bleeds” is a song in which Harvey’s narrator coos “You were going to be my life/ Dammit!” before cutting off her lover’s legs, and a truly discomfiting song about a sexual encounter that may or may not literally involve a hook. At different times, she is Eve in the Garden of Eden (“Snake”), Tarzan’s wife (“Me-Jane”), a caricature of masculinity (“Man-Size,” which reappears in horror-soundtrack form as “Man-Size Sextet”) and a witch or a cosmonaut in love with the Moon (“Yuri-G”). She can be vulnerable, as she is on the title track, alternately pleading with her lover not to leave and trying to seduce him. But she can also be brutal, vowing to twist her man’s head off—or, on “Dry,” castrating him with four syllables: “You leave me dry.” And she can beat the boys at their own libidinous games, declaring herself 20 inches, then 50 inches long on “50ft Queenie.”

From a purely musical standpoint, Rid of Me is one of the harshest yet best-produced records of the early ‘90s. Albini’s engineering puts you right there in the room with Harvey, Vaughan and Ellis, where every distorted guitar riff feel as sharp as a razor on skin and every beat of Ellis’ drums hits with the force of a sledgehammer. The quiet-loud dynamics at play in songs like “Rid of Me” and “Rub ‘Til It Bleeds” are practically explosive, seeming to suck in air before violently expelling walls of noise. This is the PJ Harvey album that it makes sense to compare to riot grrrl, for the punky, relentless abrasiveness of its sound, but it’s more telling that Albini sent Kurt Cobain a copy of Rid of Me to illustrate what sonic direction he could take them in for their own noisy opus, In Utero. 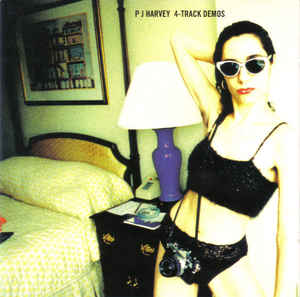 Albini also encouraged Harvey to release the demos for Rid of Me, as she had for Dry, and she did five months later. While 4-Track Demos is exactly that—a collection of demos, without Vaughan or Ellis—it’s impressive how much it sounds like the finished product, cohesively if not on a song-for-song basis. In fact, it’s quite possible that Harvey’s career would be largely unchanged if she, for whatever reason, had decided to release 4-Track Demos as the follow-up to Dry. Six of its tracks didn’t make the jump to Rid of Me, but they can go toe-to-toe with the songs that did: “Reeling” boasts one of Harvey’s most eye-opening lyrics—“I wanna bathe in milk/ Eat grapes/ Robert De Niro, sit on my face”—while “Hardly Wait” and “Goodnight” hint at some of the directions she would take in the years to come.

After parting ways with Vaughan and Ellis, Harvey’s sound began to change. She continued to explore the sounds and moods of the blues, but dialed back the roar of distorted guitars, creating warmer soundscapes that featured strings and keyboards and electronics. Like Dylan, an early idol, she was adopting new personalities behind the microphone, singing in new voices, making new observations about sexuality and femininity, and needed to embrace new musical styles to make the transformation complete. She would never again sound as lecherous and feral as she did on Dry and Rid of Me. But then again, she would never again sound like anyone else’s preconception of her. She was whoever she wanted to be—a woman, never any doubt, but far more importantly, an artist.

(What’s the Story) Morning Glory? may not have been Britpop’s musical peak, but it was und…