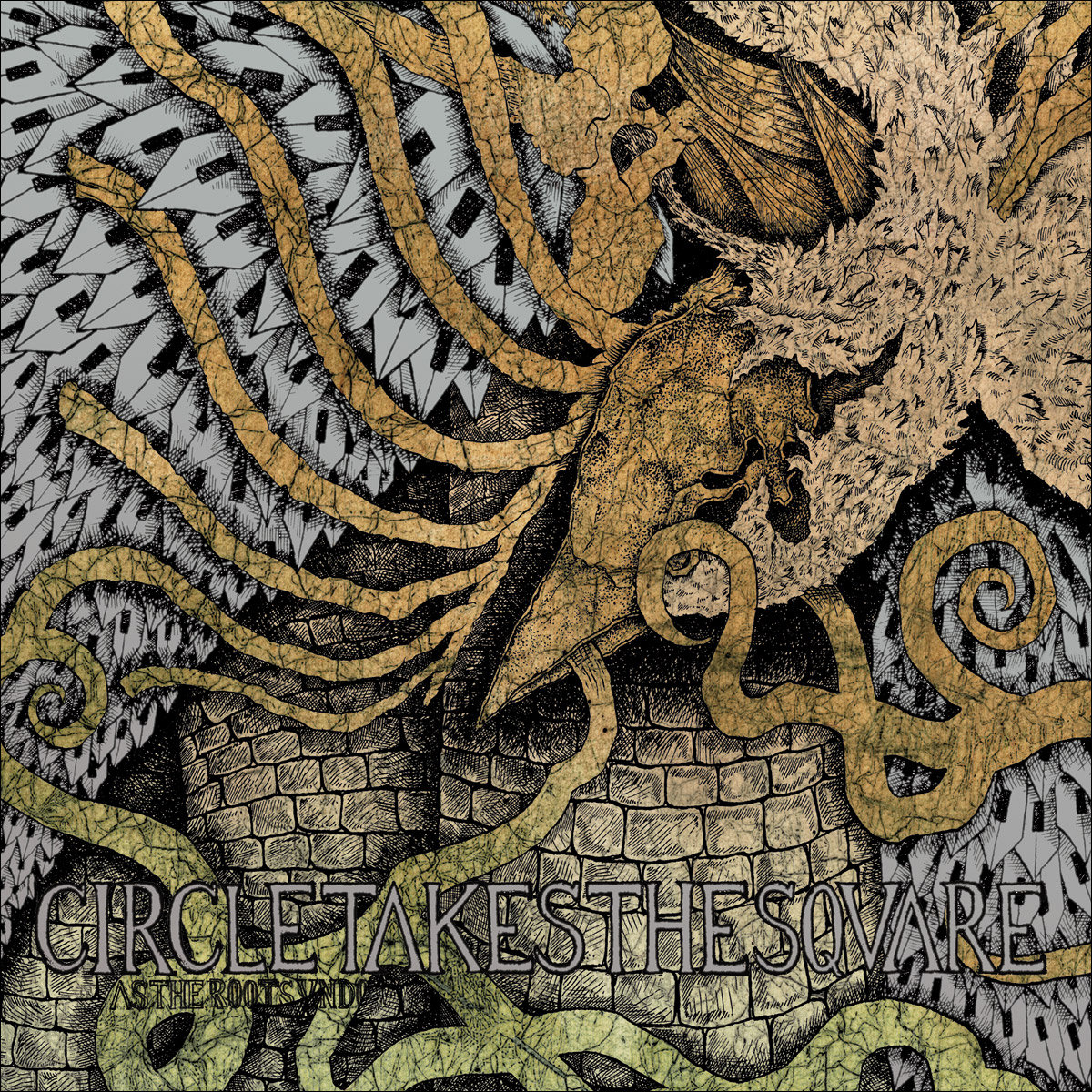 Emo sure has changed a lot since the era of Rites of Spring, hasn’t it? Once the refuge of hardcore bands who wanted to keep things a touch more sensitive, the various waves of the genre have given birth to a universe of different sounds and feelings, giving us a table big enough to accommodate everything from the Promise Ring to the Hotelier or Moss Icon. There will be many a purist out there who refuse to look past those that kept things quick and blistering, touring in grimy vans and playing in grimier basements before flaming out entirely, but the beauty of emo is that you can use its admittedly nebulous building blocks to make all sorts of different sounds with it.

Savannah, GA’s Circle Takes the Square didn’t take all that long to crack that fact, though it took a couple releases. Their first, self-titled EP didn’t really show the ways they’d mutate and bloom, but it gives hints at what’s to come. Their songs are fast and hit hard, with frontperson Drew Speziale’s shockingly-clear screams at the center of everything. But then, in songs like “Eleven Owls Have Eyes,” his voice becomes a quiet roar, nearly a mumble, amidst twinkling guitars. A year later, they put out another release, a split 7” called Pyramids in Cloth with Virginian emo darlings Pg.99, and they’d already begun to take shape, the most clear example being the prominence of Kathleen Stubelek, who can be heard in the background of that first EP, but on Pyramids opener “Patchwork Neurology,” she duels with Speziale, the two in an impressive lockstep. The interplay between the two is what truly sets Circle Takes the Square apart from the pack, with few other bands wielding their twin vocalists so well.

Even though it works impressively well on Pyramids in Cloth, it wasn’t until another two years later, on the band’s debut, that their full potential came into focus. As the Roots Undo was released by Pg.99’s Mike Taylor on his label Robotic Empire in 2004, and with it, the band solidified everything that made them excellent. Everything, from their production to their unreal ability to create haunting aesthetics, right down to the unbelievably great artwork that accompanied the album, felt like the product of a band now fully-formed. After a haunting, chanted intro (featuring a whistled melody that will carry through the record and the band chanting “Rejoice, rejoice”), opener proper “Same Shade as Concrete” kicks in, and the pair begin the same dance they started working to perfect on “Patchwork Neurology.” Here, though, they’re shockingly sure of the steps. Two minutes in, the punishing onslaught drops out entirely, leaving Speziale to sing while buried under a mechanical bass pulse. He returns, shouting “Let the flood swell!,” but as he does, Stubelek’s soprano singing voice can be heard singing the same phrase, which, considering how powerful she’s already proven as a screamer, feels almost like showing off.

As the Roots Undo is a whole album of showing off. Circle Takes the Square is a three-piece band, but they’re capable of making songs as dense as their former split-mates Pg.99, who regularly boasted nine. Stubelek isn’t ever given the same time in the spotlight, but she’s still presented as an equal, spending just about as much time screaming as Speziale, which doesn’t necessarily count as prowess, but is an incredibly refreshing thing in a genre packed to the gills with wailing men. They shift between walls of blast beats and guitar distortion to moodier, cleaner guitar melodies at the drop of a hat, but it feels as natural as the loud-quiet-loud dynamic of a band like Pixies. In “Crowquill,” Speziale is granted a moment of reprieve from the guitar squalls to deliver a screamed monologue accompanied by a lumbering drum beat, but while it should feel like the song is grinding to a screeching halt, it misses that fate by a mile – by that point, the band’s mastery of the magma flows within their music is obvious enough that it’s never jarring.

Which is good, because within two songs, their true form begins to reveal itself slowly. “Interview at the Ruins” is over five minutes long but only 30 seconds of that are screamed – the rest of the song is haunted instrumentation that serves to soundtrack the warped and doctored audio of what sounds to be a witness describing some violent event, though the details are never clear. Speziale and Stubelek’s voices will reappear, but they exist as chanted lines that barely exist above a whisper. Those haunting atmospherics give way to the album’s centerpiece, “Non-Objective Portrait of Karma,” which begins with a three-minute instrumental intro that wouldn’t feel out of place in a Godspeed You! Black Emperor song – they’ll do this again, on album closer “A Crater to Cough In,” an even longer song with an even longer intro. It’s just another way they’re at odds with the genre they exist within – the only band that compares is City of Caterpillar, who just two years prior were perfecting their own post-rock influenced songs, telling stories with their music even when they weren’t screaming.

But, then, there’s Speziale’s lyrics, which are the biggest departure point. Emo is an over-dramatic genre, but even at their most over-the-top, bands like Moss Icon or even City of Caterpillar (the easiest band to draw sonic parallels with CTTS) are still relatively grounded. Speziale’s, by contrast, are deliciously ornate, each stanza packed with vivid and hyper-dramatic imagery: “My genes didn’t bless me with the foresight of a sage/ But I know how this will end/ With apologies and ink on the page,” “She collects the strands to braid/ Into life, logging the weft of an ageless, woven infinity,” “Only the most sacred crater will suit my burial/ Only the most sacred choir performs this ritual dirge.” He waxes Shakespearean with the aplomb of a grad student, but one who grew up devouring Minor Threat and Hüsker Dü , and each of the eight songs of As the Roots Undo is too packed with lyricism as eccentric as those quotes above to even begin to capture it all here. Yet somehow, even when he and Stubelek are screaming “With our voices in harmony/ The offering of a crow quilled threnody,” it doesn’t ever feel like an ill-fit.

As the Roots Undo is an album about death and rebirth on a massively cinematic scale, reframing the act of dying not as a tragedy, but as part of some ancient rite that we should all be lucky enough to take part. “A Crater to Cough In,” which plays on the melody whistled in the album’s intro, refers to our paths in life being “a collection of points that the rain has drawn,” with the ebb and flow of the earth and “the rhythm section of the storm” serving to play us to our infinite rest. It isn’t without struggle, though – in the closing moments of the album, the pair scream in unison about being “Dragged and bound to the grave by our mane to our grave/ Dragged and bound to the tomb by a scavenger’s tooth.” As their final screams echo out, Speziale plucks out that introductory melody one final time.

The lyrics embedded within As the Roots Undo are theatrical, to be sure, but in spite of that, they’ve managed to help maintain the staying power of the album. It’s full of big themes and big questions, as untethered from their peers as possible. By the time you’ve finished, it feels like you’ve traveled hundreds of miles in just an hour, meaning that recurring melody feels like returning to the comforts of home. It’s an impressive trick, even for a band that exists within a genre that mines the depths of human emotion.

Brock is remarkably adept at capturing how manic depression feels and moves. …