For generations, artists have explored the power and the terror of connecting fully with another human being. Characters in books from E.M. Forster to Carson McCullers have demonstrated the desire to completely understand another person, but when put into practice, the feeling of totally giving oneself to another is often too frightening. That doesn’t mean it’s impossible. People connect for magical evenings or ephemeral periods all the time. But people change. It’s inevitable. Then the longing to return to those halcyon days colors whatever subsequent relationship can exist in those Edenic ashes of the friendship.

Director Kelly Reichardt explores this dynamic in Old Joy, her 2006 breakthrough film that tells the story of two old friends, both on the cusp of middle age, reconnecting for a camping trip after years of separation. Based on the short story of the same name by Jonathan Raymond, the film packs a lot into its economical 73 minutes, though much of the action lurks in subtext behind the hushed trees and misty creeks of the Oregon wilderness. 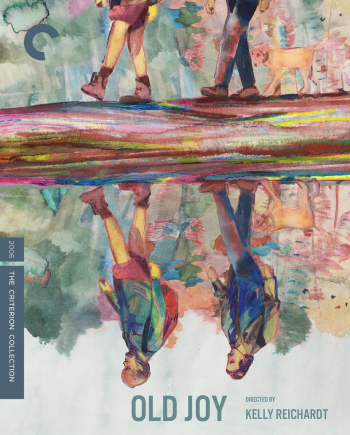 More than just an investigation of a friendship past its expiration date, Old Joy is a quiet study of masculinity. The film opens on Mark (Daniel London), sitting outside his Portland home, eyes closed in attempted meditation. It doesn’t seem to be working. There is too much on his mind. Mark has a baby on the way and the post-9/11 country is circling the wagons around George W. Bush’s hawkish march to Baghdad. A message is left on Mark’s answering machine: his old friend Kurt is in town and wants to take a trip out to soak in some hot springs. After a stilted argument with his wife, in which neither side is fully communicating their wants and needs, Mark sets off in his old Volvo to collect Kurt, liberal talk providing the soundtrack as he navigates through the city.

Old Joy is an examination in opposites. If Mark is the consummate American success story (house, baby coming, job), Kurt represents the burned-out hippie dream of the late ‘60s. Played with sad exuberance by Will Oldham (best known as musician Bonnie “Prince” Billy), Kurt is more the man-child who bounces from place to place with no job and no roots. Reichardt and Raymond (who co-wrote the screenplay) don’t give us many details about the men’s relationship. We just know they used to be close and now they’re not. Kurt openly longs for that nearness while Mark seems skeptical. He is pretty shut down, as if the impending baby and the horrific political climate have locked him in emotional prison.

Much of Old Joy follows Kurt and Mark as they struggle to find their way, both literally to the hot springs and figuratively now their friendship mainly exists in the past. Mark receives frequent phone calls from his wife, who is clearly displeased that he left, while the more loquacious Kurt smokes a lot of weed and reminisces about people and places from the past. The world has turned and left Kurt behind. When he mentions that he is going to visit a favorite record store in town, Mark informs him that it has closed for good. “Sid’s gone, man. The rent got to be too heavy.” It had been replaced by a smoothie place, a portent of the shift Portland would undergo as the century wore on.

The men begin to connect a bit more once they enter the woods. Filmed with loving detail by cinematographer Peter Sillen, Old Joy turns into a koan as Mark and Kurt walk over logs and through the luxuriant wilderness that surrounds Portland. After getting lost, they camp out in spot where other people had dumped a couch and other garbage. They spend the night drinking, smoking and shooting cans with an air gun. While sitting around the fire, Kurt shares that he once took a night class in physics but deemed himself smarter than the teacher, better versed in string theory. Besides, Kurt claims to Mark’s surprise, the universe is shaped like one falling teardrop.

The film’s title comes from another philosophical torrent by Kurt. Later in the film, once the men find the hot springs, Kurt claims that sorrow is nothing more than worn-down joy. As they soak naked, side-by-side in the rustic springs, Kurt is speaking of their friendship, something that once brought happiness to the men, but time and distance has eroded those feelings into sadness. When he is finished speaking, Kurt attempts to rub Mark’s shoulders, a move that surprises his friend. After a bit of a struggle, Mark gives in. Were the men lovers in the past? There aren’t many clues to indicate that. Rather, Reichardt is likely exploring how our masculine culture denies us the opportunity to truly just be vulnerable. A back rub doesn’t have to be sexual by nature. Yet, we fear the touch of another, cannot truly let our guard down.

When the two men return from the trip, nothing has changed. Mark returns to his home, the impending domesticity ready to envelope him, the angry, empty rhetoric of liberal talk radio his soundtrack. Meanwhile, Kurt wanders the Portland streets at night, lost and alone. A panhandler asks him for money and in some ways, it appears that Reichardt is telling us that Kurt’s future won’t be too much different than the mendicant he encounters. If only the two men could freely share what is on their minds and in their hearts, maybe then things could be different. Only connect, indeed.