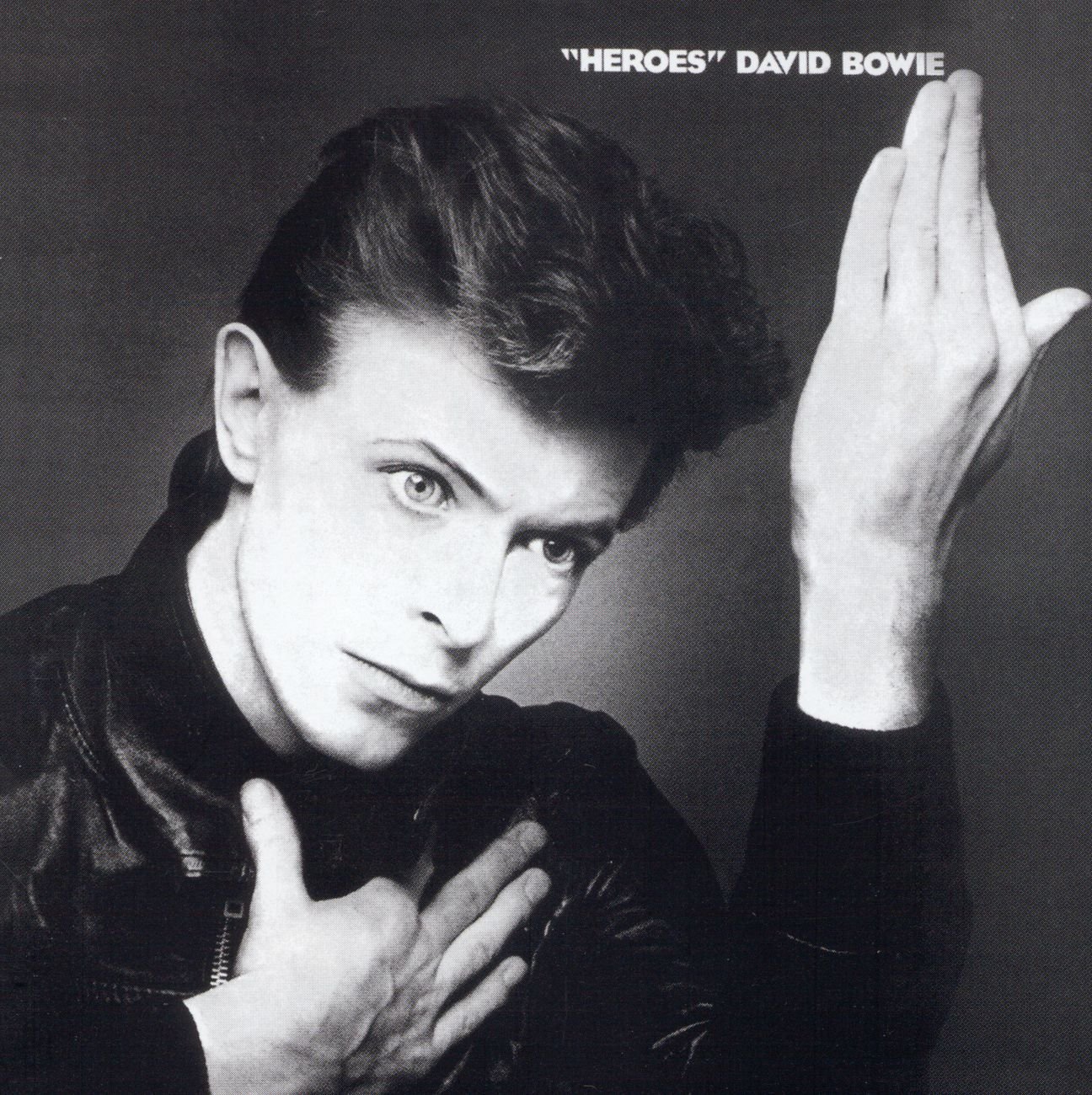 Though critics don’t talk about it much, David Bowie was an avid art collector as well as a painter in his own right. His collection included, among other things, Jean-Michel Basquiat’s striking Air Power, abstract landscape painter Peter Lanyon’s Witness, which leans more toward abstract expressionism than landscape, and Frank Auerbach’s Head of Gerda Boehm. Speaking to The New York Times of his admiration for Auerbach’s gestural works Bowie said, “I want to sound like that looks.”

When writing about Bowie’s phenomenal 1977 record “Heroes”, the second album in his Berlin Trilogy, a trilogy which many consider the high point of his career, we often focus on the influence of the city of Berlin on the record—how the record was recorded only “500 yards from the Berlin Wall” at the Hansa Studio, how it reflected the Cold War era, the paranoia, the specter of violence embedded in the time and place. As Ryan Dombal said, writing for Pitchfork, “West Berlin was a dangerous and spooky place to make an album in 1977. And that’s exactly what Bowie wanted.” Besides the influence of the history and politics of the place, the influence of the German music scene on Bowie’s work during this period—particularly krautrock and ambient—is undeniable and well-documented.

However, likewise essential to the ethos of “Heroes” was the influence of visual art on Bowie’s approach to sound. Recorded in the summer of 1977, “Heroes” came into being shortly after Bowie’s move to Switzerland in 1976. Staying near Lake Geneva, Bowie spent much of his time there painting and going to galleries in Geneva (in addition to visiting Berlin’s Brücke Museum). During this time, Bowie became not only an avid supporter of art but an avid painter as well.

Arguably, it was expressionist work that spoke to Bowie the most. Bowie’s pose in Masayoshi Sukita’s iconic cover photo for Heroes was itself inspired by Roquairol, a strange, vibrant portrait, featuring a dynamic composition dominated by the diagonals of the subject’s arms, by the German expressionist painter Erich Heckel. (The cover for Iggy Pop’s The Idiot, as you might have guessed, was inspired by the same painting.) Heckel was a key member of the Die Brücke group of expressionist painters in early 20th-century Germany, who produced works characterized by vivid, unnatural color palettes (in some ways similar to the Fauvists) and emotional immediacy. It’s important to our understanding of the record that “Heroes” followed a period of intense study of visual art for Bowie, particularly of expressionism.

The influence of expressionist painters like Heckel goes beyond the album’s cover; Bowie’s interest in art from the perspective of a viewer and a practitioner is writ in the music itself. Early 20th-century expressionism, though still representational, anticipates its more abstract descendants in favoring the representation of inner emotional states as opposed to physical reality, collapsing the supposed barrier between the two, intentionally exploring the capacity for the visual realm to depict what we cannot see. Similarly, throughout much of Bowie’s work, but especially in the case of albums like “Heroes” and Low, Bowie wanted to depict musically things we cannot hear. Accordingly, his foray into visual art resulted in music that is a distinctively synesthetic experience.

We see this yearning for synesthesia in the instrumental pieces evoking soundscapes on Low and “Heroes”, many of which were collaborations with Brian Eno and which dominate the back halves of both albums. The word itself—“soundscapes”—resonates with the word “landscape,” recalling Bowie’s admiration of the abstract landscapes of artists like Peter Lanyon. In particular, the title of a song “Moss Garden,” from “Heroes”, seems purposefully meant to evoke a landscape, evoking the historic link between soundscapes and ecology, and as such, is an attempt to speak the language of visual art. Immediately following the portentous juxtaposition of a simple piano line and ghostly synth on “Sense of Doubt,” “Moss Garden” offers a much-needed exhale—Bowie’s koto (which he learned to play for the album) climbs and descends unhurriedly across Eno’s sonic backdrop. It’s a dream ambient collaboration between Bowie and Eno, and given ambient’s own conceptual associations with the visual, it’s fitting that Bowie’s dive into art in ’76 coincided with his collaborations with Eno.

The influence of expressionist art is apparent not only in Bowie and Eno’s instrumental collaborations on “Heroes” but in the vocal tracks as well. Much has been made of the improvisational recording process of “Heroes”, particularly the fact that many of Bowie’s lyrics were made up on the spot as he sang. The stream-of-consciousness method has been called “Burroughsian,” linked to the writing style of the Beats. But the connection could just as easily be made to the spirit of abstract expressionism, the mid-century inheritor of the emotional intensity, so-called “primitivism” and disregard for representational fidelity embodied in the work of the German expressionists. We see this penchant for improvisation in the gestural paintings of the period as well as in what Jackson Pollock dubbed “action painting.”

So, when faced with the baffling lyrics of “Joe the Lion,” which were written and recorded, as Tony Visconti says, in “less than an hour,” it’s helpful to think of them as gestures, which, as the gestural stroke reflects the movement of the painter’s arm over the canvas, reflect the generative process of the mind as it moves from object to object, before it starts to organize things for presentation. You can think of the repetition of words and phrases—“Joe the lion went to the bar,” “nail me to my car,” “You get up and sleep,” “Joe the lion,” “Made of iron”—not in terms of their literal meaning but in terms of the way the sounds of the words resonate with each other, like colors or forms in a painting—the way they fit, say, alongside Robert Fripp’s stellar guitar work. And even when the lyrics do have a “representational” analog, it’s a further testament to Bowie’s interest in visual art; the line “nail me to my car” was inspired by a piece by the controversial performance artist Chris Burden called Trans-fixed, in which Burden had his hands nailed to the back of a Volkswagen in a performance of crucifixion. Here, Burden’s visual work served as a sort of springboard for Bowie’s lyrical spontaneity.

Inspired by the immediacy of visual artworks by the German expressionists and others, as evidenced by his concentrated study in 1976, Bowie sought to replicate that immediacy in his lyrics—to write things that would hit you before you knew what they meant. The stream-of-consciousness process of writing allowed him to do just that. The extemporaneous quality of Bowie’s lyrics is mirrored in his unfettered, bracing vocal performances on this record, some of the best he put on wax. On the title track, Bowie took the rhythmic interplay of vocal and beat on the Velvet Underground’s “I’m Waiting for My Man” and turned the notch up to 10, swapping Lou Reed’s signature talk-singing casualness for Bowie’s all-out emotional delivery—aided by an octave jump and Visconti’s clever use of noise gates. (By the end, Bowie is shouting to reach the mic placed at the farthest interval from him [50 feet].) Much like the way a painter’s gestural brushwork is a window into the process of the painting’s creation, Bowie’s “gestural” vocal performance can be seen as a window into his own process of creation—in this case, the recording techniques involved in his collaboration with Visconti.

“Heroes”, in addition to being one of the most innovative albums in a career defined by restless reinvention, is also a fascinating glimpse into Bowie’s fixations during an incredibly fruitful period. It not only highlights the very real influence of Berlin’s political landscape as well as the influence of genres outside of rock music—ambient, electronic music, krautrock—but also the development of Bowie as an artist and patron of visual art, which is a defining aspect of his Berlin period and his work in general. In the early 20th century, the painter Wassily Kandinsky spoke to the kinship between visual art and music, “Colour is the keyboard, the eyes are the hammers, the soul is the piano with many strings. The artist is the hand which plays,” going on to say that “music is the ultimate teacher.” Often, Kandinsky would call his paintings “improvisations” or “compositions.” Like Kandinsky, Bowie saw a link between the abstract languages of music and visual art. When Bowie said he wanted to sound like Auerbach’s paintings looked, he allied himself with Kandinsky by aspiring to the inverse of Kandinsky’s project—to speak the language of visual art through sound.