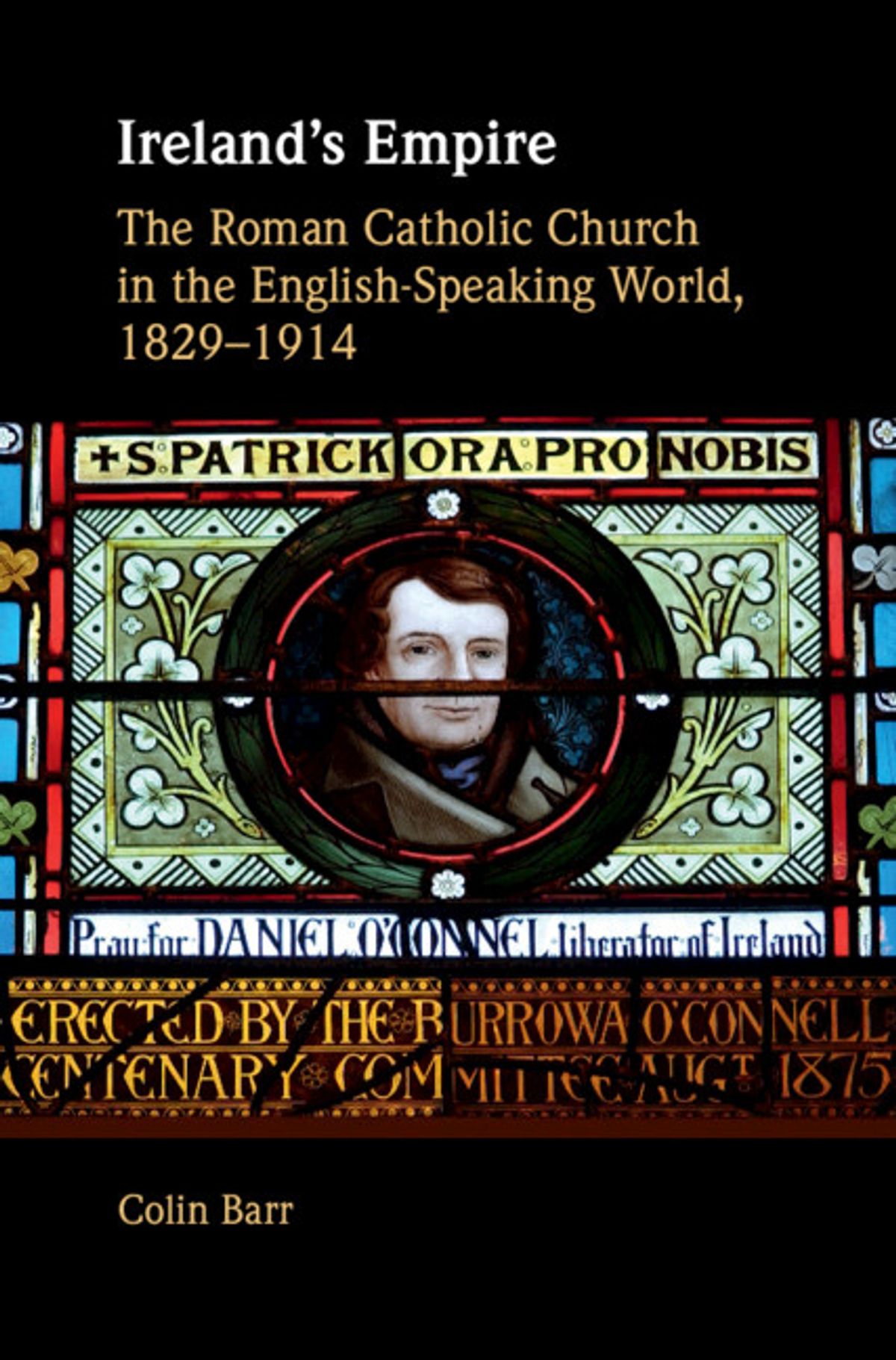 To produce his masterful study, Ireland’s Empire: The Roman Catholic Church in the English-Speaking World, 1829-1914, Colin Barr rummaged through over 100 archives and was driven to raise enough funds to visit dozen countries across five continents over more than a decade. The undertaking itself deserves commendation, and Barr earns that and more. His work spends nearly 600 pages integrating a massive amount of research into a lively, witty and meticulous presentation of how Ireland, lacking a political realm to rule, took its forces abroad to construct alongside its own diaspora the fortunes, spiritually and financially, which served and ordered millions. While the subtitle understandably limits his purview to the period roughly spanning the near-century immediately prior to the ascension of Queen Victoria to the throne of the British Empire, up to the start of the Great War, Barr has plenty to present as it is.

Still, an explanation awaits. Given Barr’s scholarly immersion into the rise of Paul Cullen, who early in the 19th century managed to seize the reins and wrest (partial) control away from the English, who had suppressed the Catholic Church in Ireland, to become in 1866 the island’s first cardinal, this chronology makes sense. Tracking Cullen’s career in Italy and Australia sparked Barr’s awareness of these Irish “global networks” connecting its Christian missionaries, emigrants, converts, good works, cultural communities, educational endeavors and considerably intricate ecclesiastical management. All these widened the impact of today’s Church as “probably the planet’s largest employer.” That institution’s association with the Irish sustains itself despite assimilation, defections from the faith and the erosion of clerical clout.

Even today, the remnants of where the Irish set their dogged footprints and determined social surveillance may be traced into darker corners: “it is the case that the church that the Irish built has been partly susceptible, in part because of the kind of church the Irish built: unaccountable power, social deference, and self-segregation have provide a fertile terrain for predators.” This sentence demonstrates both the tone and the style of Ireland’s Empire. After a long stint at the National University of Ireland, Maynooth, adjacent to today’s near-empty seminary, Barr is currently a professor at the University of Aberdeen, and proves ideally situated to guide not only historians but those outside academia.

Learned readers may well be familiar with Barr’s thesis. As Paul Cullen studied so long away in Rome, he learned how the Vatican worked from close up. This insider advantage, sharpened by his fluency in Italian, enabled him to stack the deck once he rose up the ranks. Starting at the Holy City’s Irish College, he supervised a cadre of elite seminarians from their homeland. Then, after a key appointment to a venerable archbishopric back in the land of his birth, he soon transferred to that at the center of Hibernian gravity, Dublin itself. By the middle of the century, he consolidated his hold. His past students and relatives became allies. His diocesan priests created a vast bureaucracy across the lands where the English had expanded. “What they created was the largest, most important, most enduring, and most historiographically convincing of all imperial networks.” Indeed, Barr avers that any St. Patrick’s Day parade attests to a “Greater Ireland.”

To take another, if less festive or feckless, relevant aspect: Barr adapts Tony Ballantyne’s “horizontal lineages.” Granted that “post-colonial” this and “transatlantic” that dominate many niches among another planetary power-structure, one proliferating among today’s progressive professoriate, this upends the long-held mapping that traces economic, political and cultural relationships as if laterally emanating from the metropole out to the hinterlands and colonies. Instead, and the Spectrum Culture audience may relate, think of how our present patterns of commuting have upended urban planning over the last century. This dispersed, overlapping and many-webbed pattern undermines earlier decades, when the ideal auto or public-transport “rush hour” had traffic entering a city center and promptly exiting eight hours later, the pair reliably clocked.

Therefore, the peripheries themselves, like exurbs today, ferry harried workers who must make multiple stops to care for children, shop, eat, socialize and/or work more than one job as a gig or sideline, to complicate any central plan. Similarly, Rome replaced London, and Dublin nudged into what the Crown’s civil service might have carried out in Delhi. While the military might of the Queen’s mandate remained, these spiritual and commercial endeavors both found themselves in the hands of clergy, workers, families and troops that often were drawn from Irish birthplaces. Papal diplomats might step in where a Crown appointee might have been expected to handle matters. Emigrants bred their own big clans, and these sons and daughters perpetuated this Irish insider advantage, as a few too became not only navvies, maids and hod-carriers, but even bosses and potentates of their tropical, frigid, parched, tenement, barrack or outback domains.

Any audience intrigued by this set-up will benefit from following Colin Barr’s lead. His knack for telling details enlivens this. One tale must suffice in this short review. Deep in his examination of the shenanigans embroiling the attempts Down Under to run and tame a fractious, far-flung frontier, the awkward, well-intentioned, but unprepared and overwhelmed monk John Bede Polding receives the attention he has long lacked. Exasperated by yet one more clash, this time with one Quinn sent by the Office of the Faith (fka “Propaganda Fide”) to monitor Polding, he resents this 1863 intrusion. He confides how with that overseer lurking, not to mention with two of said spy’s brothers “and a Cousin in a Hierarchy of seven or so,” Polding felt there was “too much ‘Quinnine’ for my taste.” As Barr adds: “It was, he admitted, a ‘bitter pun.”’ Within dry documents of Australian archdioceses, Barr here as in hundreds of citations displays the zeal and the resentment, the idealism and the drudgery, behind the miter and beneath the soutane.

Ireland’s Empire compiles a treasure-house of knowledge. Without theoretical trendy jargon or smug satisfaction of one positioned in a supposedly more tolerant and less sectarian era, Barr uncovers the drama and unravels the diplomacy which linked, for so long, Irish with Catholic. It’s devoutly to be hoped that further volumes await from his discoveries about a novel creation: an “impossibly tangled” and whirled fusion of this “distinctively diasporic Hiberno-Roman amalgam.”