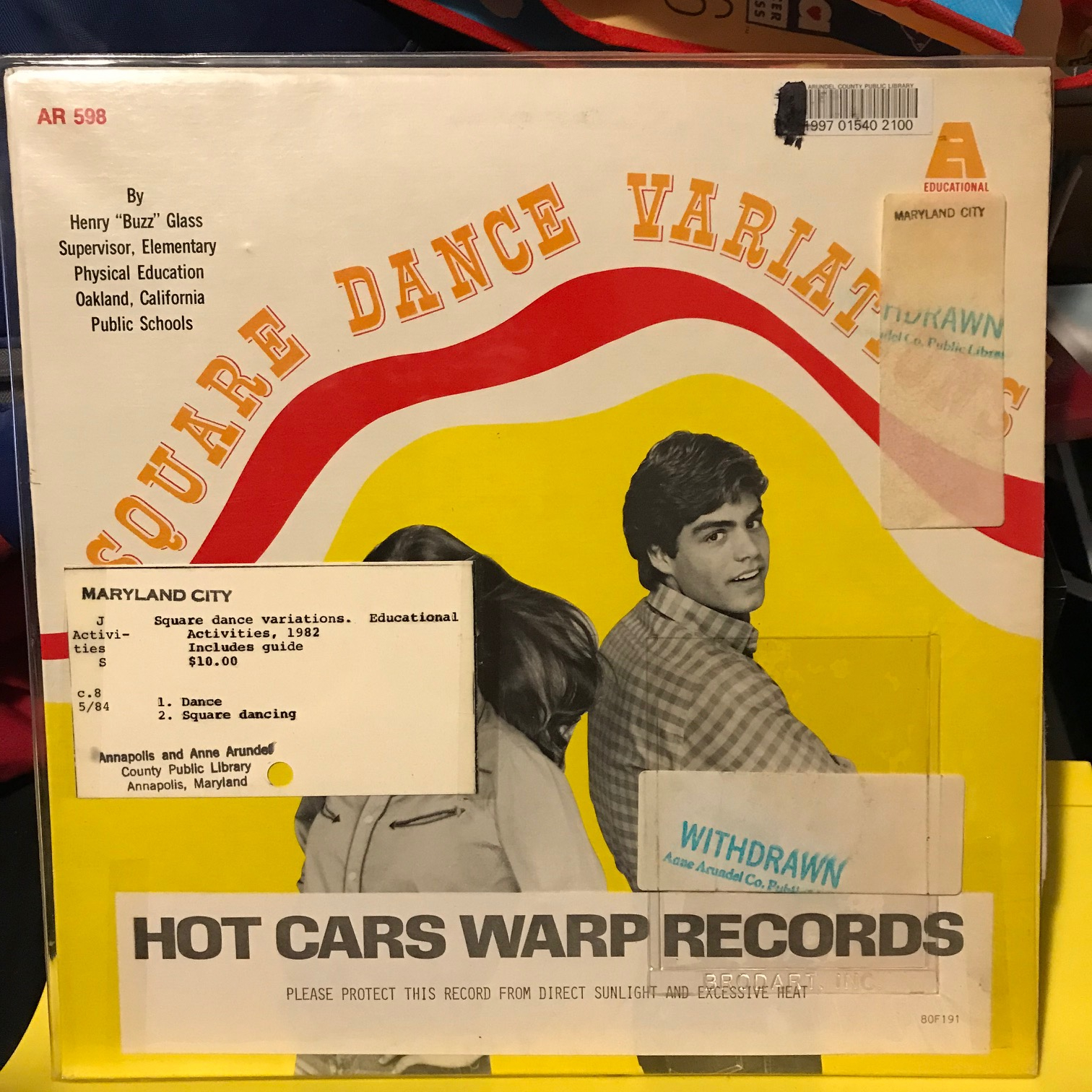 Album covers are one of your best values in art. The square format and size of the vinyl canvas makes a good accent point for any midcentury modern-inspired wall space. And sometimes, it’s that something extra that gives an album it’s visual spark. In 1982, longtime Bay Area dance instructor Henry “Buzz” Glass released the instructional record Square Dance Variations Volume I, and its fairly plain cover features even then-outdated graphics that add to its charm. But a series of additions from an oddly aggressive East Coast institution raise this particular copy to the level of found art.

The recordings alternate called-tracks with instrumentals, “to let you call your own if you wish.” The calls don’t much count as lyrics on “The Trio Hoedown,” aka “Piney Woods Whoop.” Buzz unassumingly calls out simple directions like, “Forward three like I tell you to/ Fall back and then renew.” More substantial is “Catch All Eight” (aka “Reno”) with a more elaborate arrangement featuring barrelhouse piano and banjo and guitar figures that are almost flamenco-like. There’s a bit of romance, and you can almost imagine a couple falling in love during this one. The calls, too, have more flair: “Boys walk the inside ring/ Roosters crow, the birdies sing/ Girls clap and keep the beat/ Boys ready, catch all eight.” The calls evoke farm life, at least, that’s what this city slicker assumes farm life is like, with boys and girls running around chasing fowl and the cycle of farm work operating in tandem with the cycle of life like one sweet interconnected ecosystem of human and animal society.

“Head-Shoulders,” aka, “Island in the Sun,” doesn’t evoke the tropics as one might hope, but the B-side offers the most spirited calls. Buzz eagerly introduces, “This dance is called ‘Eee-yo!’” followed by some of the most exciting “Circle left and around that wheel/ Ready now let’s hear you squeal!” The title whoops are the best vocal performance on the album, and if the fiddle accompaniment isn’t exactly honky-tonk raw, it’s a hoot.

Improbably, Buzz gets even more a groove going on the B-side. With “Mini Square Mixer” (aka “Soldiers’ Joy”), the calls pick up a little more rhythm as Buzz cooly instructs, “Forward up and away you go/ Come around and do-si-do” and the music starts to really swing, picking up even more on the instrumental version. So there is an element of programming here, Buzz warming up the crowd for more fevered dancing. The album and dance session closes with the electric guitar distortion cranked up just a little on “Nine Pin” (“Cinnamon Twist”). The accompanying booklet explains that this dance is meant for four couples with an extra boy or girl playing the “nine pin.” If the nine pin is a boy, he takes each girl out of the couples set and swings with them for eight counts, and if a girl is the extra one, they dance with all the boys. In this age of social distancing, such trading seems a distant memory that, at this remote date, might even be your own; who’s to say life didn’t used to be like that?

But as is so often the case with the bargain bin, the music may not be the most remarkable thing here. This copy of Square Dance Variations is unique, withdrawn from the public library system in Annapolis, Maryland. For nearly 40 years, the jacket has been perfectly preserved in a thick protective sleeve, but the placement of extraneous elements reveals a possibly hostile library employee; why else would someone slap a catalog card right over the face of the homespun female model (identified as Corene Schwartz). The bottom of the sleeve has been pasted over with what may be the best hype sticker in recorded sound history, warning in bold caps, HOT CARS WARP RECORDS; the band names, record store marquees and reissue labels all write themselves.

Buzz Glass had a long career in dance; he lived to the ripe age of 97 and died in 2013. According to an obituary published on a Southern California folk dance site, Glass began dancing in 1937, and studied with modern dance greats José Limón and Katherine Dunham before he started teaching for Arthur Murray studios and eventually striking off on his own. Among the dances he taught were evocatively named moves like the Alley Cat, Cha Cha Con Polka, Eskimo Hunting Song, It’s a Snappin Time and the Oregon Webfoot Schottische. In at least this one case, Glass inadvertently inspired a frustrated library artist, whose work led one eagle-eyed crate digger down a mysterious and generally untapped road. Such is the siren call of the bargain bin, which teaches us as it entertains.