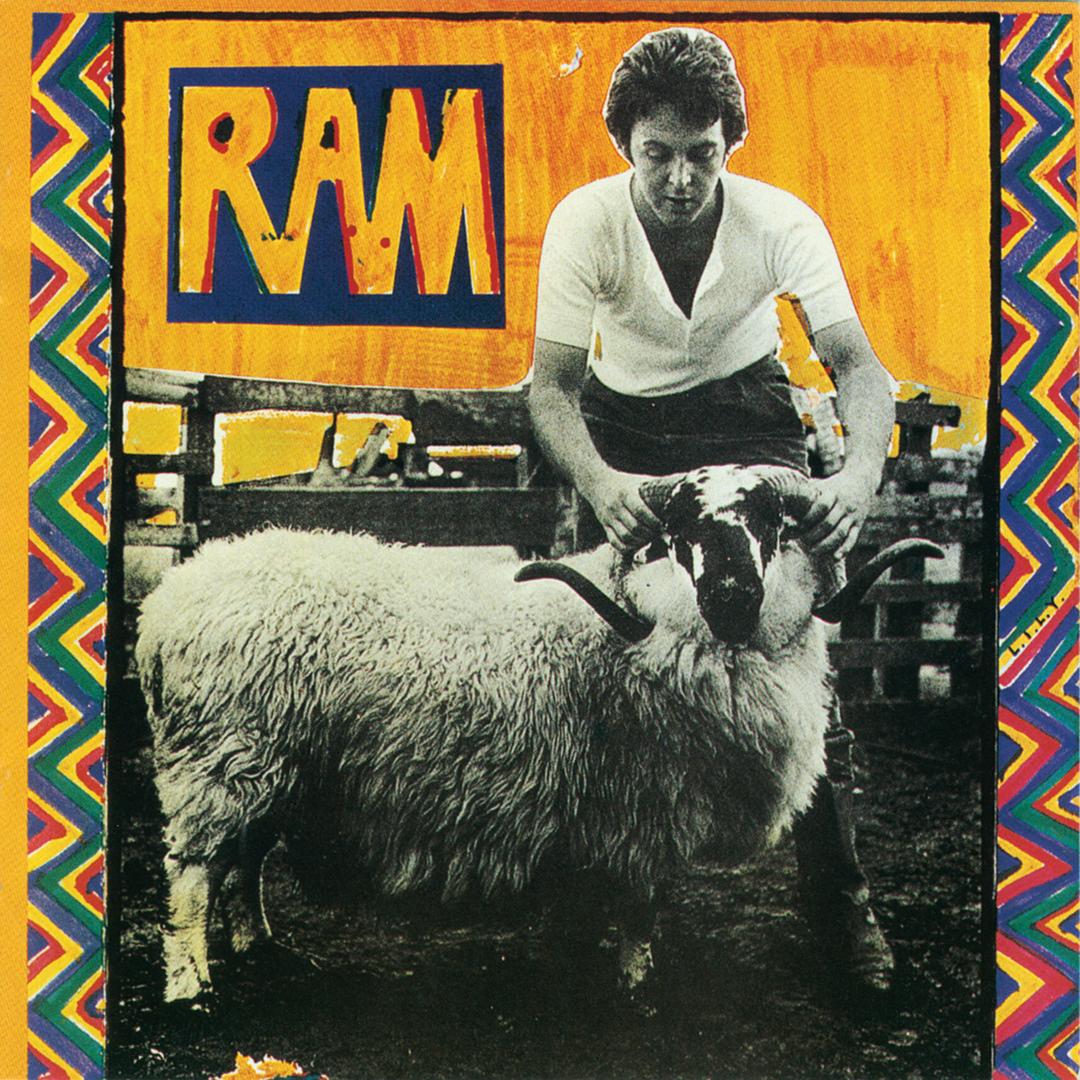 Paul & Linda McCartney’s Ram starts as an above-average blues rock album, but by its third track it becomes something so much more: a time-traveling romance about realizing that settling down isn’t the end of the road but the beginning.

It could be an elaboration on and a rebuttal to Paul’s beloved Pet Sounds, likewise aspiring to nothing less than transcendence but rejecting its wistful fixation on lost youth. Both have animals on the cover, but while the Beach Boys’ goats symbolize sweet childhood trips to the petting zoo, McCartney’s ram is both the virile epitome of a male protector and, for its owner, a long-term commitment like the horse and sheep of “Heart of the Country.” You can’t lug a full-grown ram around on tour. And while the Beach Boys’ wounded harmonies reflect the collegiate charm of doo-wop and the greedy discipline of their showbiz father, Linda’s untrained pam-pams lend the same kind of heaven-parting uplift while complementing its tossed-off, carefree quality, which can only come from true stability. Perfect-sounding music is tentative; it always seems like it’s about to break, risks being soiled. Earthy, domestic music like this springs and sproings all over the place, content that the center will hold.

“Every love song I write is about Linda,” McCartney has said. We could’ve guessed. Even when the scenario is as distinctly teenage as “The Back Seat of My Car,” we intuit that it’s about them, just in a different time and a different body. This is not a linear romance but one that jumps from moment to moment, beginning with that third song, “Ram On.” Has any song ever conveyed the experience of having an epiphany with such power, and in such few strokes?

The first 20 seconds of Ram are like a transmission from somewhere else, Paul’s voice high and mocking as guitars swirl around him and the drums clatter into place. He’s saying “piss off,” directed at his old bandmate John Lennon but also a marvelously irreverent way to start an album that seems to be constantly flatulating, a paradise that’s also a little dirty.

We’re still in happy-go-lucky Macca mode. The three legs might have something to do with the Beatles he left behind, but the metaphor is a bit clunky. The song’s worth it mostly for the end, which sounds as much like a three-legged dog trying to run as any music anyone is ever likely to make.

And here it is. After the first two songs, very much rooted in the present and beginning the album in medias res, here is our first journey back through time. “Ram On” refers to himself: both to the act of becoming what the ram symbolizes and to the name Paul Ramon, alter-ego on some McCartney productions. It’s about the moment he realizes he must settle down. Notice how “soon” gives way to “right away,” as he realizes his decision can wait no longer—and then those harmonies, provided by the very somebody he would give his heart to. The lyric sheet runs just ten words, and yet they contain the multitudes of a man’s life.

“Ram On” looks into the future with fear, uncertainty, excitement, and resolve. “Dear Boy,” major-key and upbeat where “Ram On” always wandered back to minor, is like another voice confirming our hero has made the right choice.

There’s something about the way the first line—“we’re so sorry”—spirals into plings of vibraphone and distant wraiths of reverb-drenched vocals that lets us know we’re in for The Long One. It’s hard to say how this song fits in with Ram’s romance, but here’s a guess: Uncle Albert is an authority figure, a dull old codger like the one Paul has happily accepted by now he may become. Maybe his apology is a sincere one to the adults he treated poorly in his youth, and his snarked “we haven’t done a bloody thing” could be him making fun of himself, realizing how arrogant and regressive the fuck-the-man attitude of his unmoored youth was, rejecting the nostalgic myth of being young and becoming a clean old man like the one he and his band so mercilessly tormented in A Hard Day’s Night.

“Smile Away” is disgusting and rather hard to listen to–its descriptions of smelly feet and bad breath seem to waft from the very sound waves–but it serves two key purposes on the album. One, it enhances the pervasive musk throughout the album, with which the McCartneys as the owners of a farm would have been familiar. Two, it lets Paul confront the less pleasant aspects of growing old with a merry shrug rather than a pang of dread.

This song comes chronologically after “Ram On.” While “Ram On” is about the mental process of settling down, “Heart” looks at the prospect of putting down roots and becoming like those “holy people” with excitement.

An outlier, and a song a lot of Ram fans skip, but worth it for the artfulness of Paul’s vocal contortions. Listen how he pronounces the word “cantata” to emphasize the flatulent quality of those last two syllables. It’s a highbrow fart joke worthy of Rabelais and every other bearded intellectual who’s ever given up a guffaw in spite of themselves at that most primal form of humor.

Daily life on the farm. Not about eating.

Chronologically, this is the end of the album. When you’ve heard Ram a few times the entrance of its concluding riff becomes exhilarating, because you know by now that love is long. This is the couple looking at each other, then at the future, and seeing no end to love.

The album’s focal point gets picked up again for a few more bars of communal strumming, ending with Paul quipping “who’s that coming around the corner?” The reprise is distinguished from the original by the inclusion of warm background chatter, and I’m reminded that Paul met Linda at a Georgie Fame concert.

Finally, Ram explodes into the orchestral declaration of insurmountable passion with which it could only end. This is its very own “A Day in the Life,” its “Surf’s Up,” a teenage symphony to God if one was ever written, a song that not only justifies but ennobles every silly love song and granny song ever put to wax. Ram threatens to turn into something like this for its whole runtime, but its rustic realism keeps it from flying too far off the rails, and it’s appropriate that the McCartneys reach back into the ‘50s, the decade of mad teenage dreams and inflamed fantasies of romance on the road, for the album’s climax.

There’s no doubt who the song’s teenage couple is. At first their cry of “we believe that we can’t be wrong” sounds like Paul decrying the petulance of youth, as he does on “Uncle Albert,” but soon the cry is echoed by the girl’s stern father, and the two become one and the same—which maybe is the point of Ram. Undying love, at least in its monogamous ‘50s incarnation, has to end this way, with the teenage lovers finding lasting domestic peace. What Ram tells us is that this change represents not an end but a beginning.

“Back Seat,” like “A Day In The Life” and Pet Sounds’ “Caroline No” (the antithesis of “Back Seat,” in which Wilson literally sped his voice up to sound like a child) ends with a brief excursion into another world. The band speeds up, the arrangements blur together, the McCartneys wail non-lexically, the firmament of the album seems to split open. I think I know what it is. It’s the sound of the future.