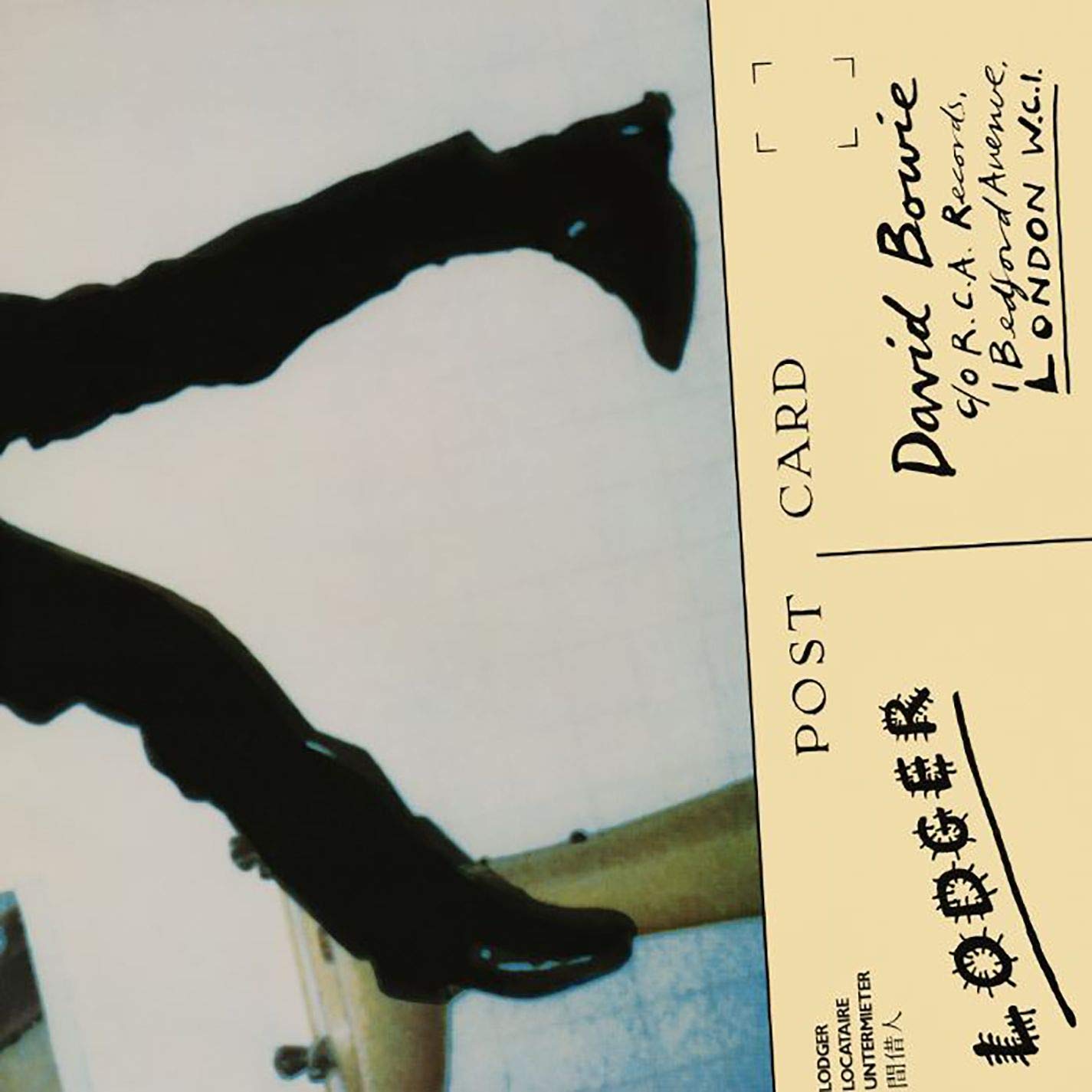 The conclusion to the loose trilogy of albums that began with Low, Lodger was released in May 1979. That same month, Margaret Thatcher became Prime Minister of the UK. Three years earlier, Bowie had been reeling around musing approvingly on fascism, collecting Nazi memorabilia and (depending on who you ask) throwing up the sieg hiel. This has, in the four decades since, been explained away as the result of a deadly confluence of Bowie’s theatrical Thin White Duke persona – documented on Station to Station – and the paranoia and depression brought on by his drug use. To a degree this is obviously true – and to Bowie’s credit he began apologizing about the whole thing and clarifying that he was not, in fact, a fascist almost immediately – but it isn’t the whole truth. To come down from the drugs, he left Los Angeles. Maybe he moved to Berlin to come down from the (faux?) fascism, too, by experiencing life in its cold, dead heart, leaving the Thin White Duke behind.

What took its place? There’s no obvious counterpoint persona in the Berlin era. Bowie had already taken pure aesthetics – engulfing the political – to its furthest point in his fascistic cosplay. But this kind of thing doesn’t come from nowhere. Not every junky is an Aryan sociopath. Bowie’s personas were each exaggerations of a fractured piece of himself – his dreams, nightmares and fantasies. It might be that Bowie had hollowed himself to the point that there was nothing left to aestheticize, or it might be that in scraping the bottom of the barrel he had to reckon with the rot that he found. In the midst of this, he was reaching middle age, looking around, and seeing a sea of imitators and artists who were taking his influence in new directions. What did David Bowie even mean? Station to Station and Lodger are the closed loop of this reckoning.

And Lodger really has much more in common with Station to Station than it does with the other installments of the so-called Berlin Trilogy that were birthed out of this period. Both are transitional albums, looking back to what had come before – musically, thematically – while forging the next phase of his art and career. Gone are the cinematic instrumentals, the frigid sonics, the high-seriousness and gone, even, is the location from which the trilogy takes its name: Lodger was recorded in Switzerland in the fall of 1978, with overdubs completed in New York the following spring. In a detail that sounds like it comes out of a Bowie song, the studio in Switzerland had the bizarre setup of putting the control room on a different floor from the studio, leaving the producers – Bowie, Visconti and Eno – to watch the musicians on CCTV, the players like rats in a lab. While the musicians were surveilled, the partnership between Bowie and Eno was fraying at the ends. No wonder the album sounds as lonely and paranoid as it does.

That sound, though, is still exceptional. Philip Glass – who created a series of symphonies based on the Berlin Trilogy – once said that one of Bowie’s greatest abilities was to make “fairly complex pieces of music, masquerading as simple pieces.” From the John Cage-influenced piano of “African Night Flight” – Eno’s influence isn’t totally absent from the album – to the warped funk of “Red Money,” Lodger runs the gamut of Bowie’s stylistic interests. “Yassassin” is a mélange of reggae and Turkish melody. “Move On” is propelled ever-forward by a constant, rumbling beat. “Boys Keep Swinging” closes with a sampled Adrian Belew guitar solo recorded without him having heard the song before and “Repetition” incorporates the dramatic and furious violin of Simon House.

Bowie’s vocals throughout the album are frayed, shot-through like he’s singing the after-after show at some club he and the band have stumbled into just before last call. But these moments of seemingly deliberate strain are punctuated with moments of vocal transcendence. On “Fantastic Voyage,” Bowie hits the most beautiful, piercing note of his career at the end of the first chorus and then does it again, but better, at the end of the song. Even though the song wasn’t recorded just blocks from the Berlin Wall, it’s the song from this period that deals most directly with the ever-present threat of nuclear annihilation. It serves, too, as a kind of apology for Bowie’s brush with fascism – asserting the value of dignity, loyalty and, above all, human life against those who would “wipe out an entire race.” He fesses up to the fact that he’s “still getting educated,” but that he, as an artist, must take responsibility and document the world and its atrocities so that “they won’t be forgotten.”

Elsewhere, the lyrics reflect the anxiety and displacement that Bowie was feeling in his life and career at the time. Bowie “[wakes] up in the wrong town” on “Red Sails,” bemusedly observing that “Boy, I really get around.” On “Move On” he is “Feeling like a shadow/ Drifting like a leaf.” That song begins with the simple declaration: “Sometimes I feel the need to move on/ So I pack a bag and move on.” But this is an album about what happens when there’s nowhere left to move on to – when you’re the biggest rock star and the world belongs to you, but you’ve got no home. Lodger: a recognition that Bowie had become a temporary resident in his own life. On the cover, Bowie is sprawled out, an accident victim of… what? Maybe his fame, maybe himself.

As a way through this transitional moment, Bowie uses sampling, like the Belew solo, but he also layers his vocals. “Look Back in Anger” has Bowie harmonizing with himself and almost sounding like John Lennon until his single vocal cuts through the mix on the titular line. He repeats himself in other ways, too. “Fantastic Voyage” and “Boys Keep Swinging” share the same chord progression. “Red Money,” the last song of the Berlin era, is a rework of the first: “Sister Midnight,” from Iggy Pop’s The Idiot. It’s hard to imagine a better way for Bowie to reckon with his influence on other artists than using himself as an influence. He even gives a nod to his contemporaries. As Chris O’Leary has pointed out on his legendary Bowie blog, “Boys Keep Swinging” and “Red Sails” share a lot in common with The Village People, and “D.J.” wouldn’t be out of place on an album by fellow Eno-collaborators Talking Heads.

That song, though, includes the thorny lyric: “I am what I play.” If that’s true, then what did it mean for Bowie to play at being a fascist? This question, like Lodger itself, has been too-easily dismissed.

The philosopher Simon Critchley has said of Bowie’s politics that “there is a nostalgic nationalism in Bowie – a sort of nostalgia for the utopian idea of Englishness, of Milton or Blake or Shelley. One of the things about Bowie that’s interesting politically is this connection to the idea of Englishness, and this kind of whimsical nationalism that doesn’t really make sense other than aesthetically . . . he confused fascism with nationalism.” This is absurd apologetics, of course, and it certainly isn’t “apolitical” in the way that Bowie’s defenders – and even the man himself – have tried to label him. As if these very qualities of supposedly cozy, British nationalism weren’t the sort of dry tinder that fascism easily sets light to, weren’t the tourist brochure version of brutal imperial power, weren’t, in fact, a key ingredient in any fascist project.

One might charitably read Bowie’s half-invented musical appropriations on “African Night Flight” and “Yassassin” as the work of a restless creative mind always searching for new wells from which to draw inspiration – and they are that. But they are also kin with the imperial impulse: that the world and its resources belong to you and that you can take and make use of any element you can lay your hands on. That’s not so different from what the world must look like to someone who had reached the heights of stardom that Bowie had in the ‘70s. Bowie might have left London, but the old imperial core hadn’t left him.

While Britain’s response to being an empire in decline was Thatcherism – both a refusal to recognize decline and an austere response to the material conditions of decline – David Bowie’s response to the possibility of his own decline – if not in influence, then in health and continued originality – was to sift through how he got there and what it meant to put aside some of the theatrics that had precipitated his rise in the first place. If David Bowie: The Artist, led to the anti-humanity of fascism, then he would have to settle for David Bowie, the man.

Lodger is an album that dwells in the uncertainty of what follows from that realization. When critics at the time saw it as messy, or fragmented, or subdued, they weren’t wrong, they just mistook those qualities for flaws instead of honest expressions. Bowie was asking questions and they were looking for answers. Lodger doesn’t offer easy answers, because there aren’t any. Bowie’s turn against this reactionary desire for simplicity is part of why he eventually got to go out on his own terms. It’s hard to say the same for the British Empire. The understanding that Bowie was trying to reach about himself and the world requires work, requires education. No one can do that work for you, but it might be that we could do it together. As Bowie sings on the last lines of the album, no longer a god alone above, but a human together down below: “Such responsibility/ It’s up to you and me.”