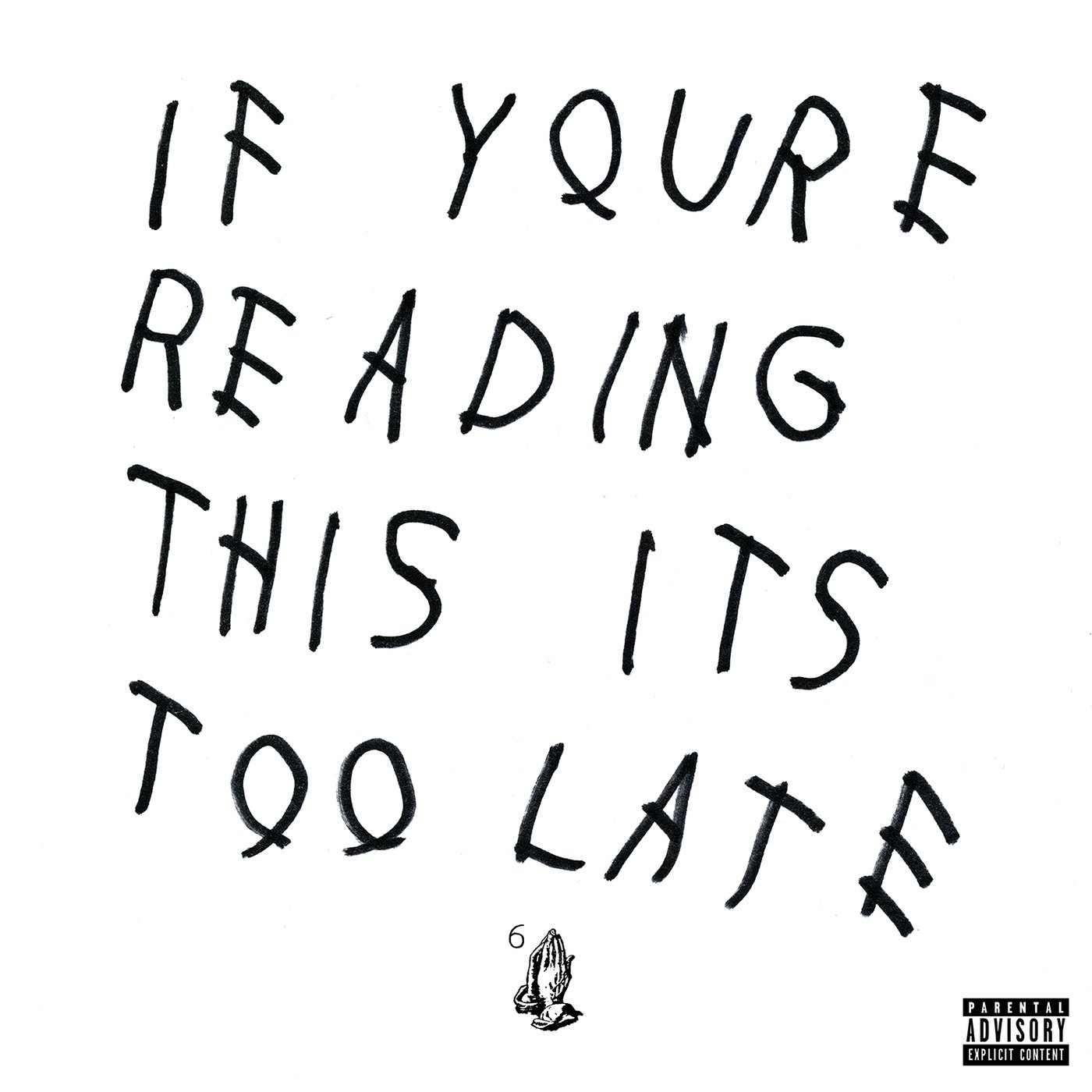 In retrospect, it’s easy to see that If You’re Reading This It’s Too Late, Drake’s 2015 chart-smashing “mixtape,” represented a pulsing node in the superstar’s music career. Following the moody R&B-driven modes of Take Care and Nothing Was the Same and prior to the bloated pop stylings of Views and Scorpion, If You’re Reading This reads as fashion-forward, attack-the-block hip hop. It’s the point where he muscled up and flexed hard, in warm-up mode for Meek Mill diss “Back to Back,” on its way just a few months later.

It’s in 2020, however, that the tape hits hardest, both as apocalyptic screed and conflicted self-reckoning. The cover of the album, in that famous kindergarten scrawl designed by street artist Jim Joe, contains a warning, its “too late” hovering humidly over the speaker-busting musical proceedings (knee-shaking piano, machine gun sounds and portal-entrance synths included). If, ultimately, its warning is only for and about the aforementioned intersection in Drake’s career (you’re too late to fire shots: he’s firmly a “motherfucking legend”), we should recognize by now that Drake is all things: no wave, stream or cloud can escape his presence.

Simultaneously, If You’re Reading This It’s Too Late intimates that Drake is nowhere and nothing tangible. “Only see the truth when I’m staring in the mirror/ Looking at myself, like there it is there/ Yeah, there it is there,” he raps on “Used To.” The truth, in other words, is not in himself but beyond him, in an image. A second mirror appears on “No Tellin’,” again in an attempt to confirm his existence as fact: “I’m just looking in the mirror like I’m really him/ Man, I’m really him.” This is clearly a case of Drake trying to convince himself of something, but the attempt masks a deeper uncertainty. Does he know he’s really him? If his image repeats the words back to himself, it must be true.

Drake foregrounds self-motivation, in dialogue with his stronger, fire-spitting alter ego that he views in the looking glass (and this a year before the premiere of Insecure, a show that would portray Issa’s rapping mirror persona as strength-recognition instigator: “Fuck going high, I’m going low”). But what he gets is more doubt, sometimes acknowledged (“I’m afraid that I’ma die before I get where I’m going”), sometimes disavowed (“My ex asked me, ‘Where you moving?’/ I said, ‘On to better things’”).

While he consistently distances himself from social media and a need for attention (making fun of the way some women interact with their timeline on “Energy,” mourning social media’s tendency to interrupt romantic interaction on “Jungle” and generally making fun of artists’ attempts to vie for the public’s attention), it’s clear that his relationship to himself is as dependent on crafting an inhabitable and marketable persona as any influencer’s. Of all the stars in the mainstream expanse, it’s Drake who—in his meticulously inhabited inauthenticity and distance from the self the world sees—represents the unsettling present most clearly.

When Drake steps away from his reflection, he grows uneasy. If You’re Reading This is a mixtape of attractive confidence barely concealing the paranoia and lack that take over when the pep talk dies down. We hear it from the jump: “Oh my god, oh my god/ If I die,” the first hook begins. Like the grandfather’s digital consciousness in World of Tomorrow, Drake mutters worried prayers from the inside of a digital platform prison, a downloadable app. There’s a reason Ginuwine’s “So Anxious” gets sampled not once but twice across the tape’s 19 tracks: the life Drake leads is nothing but nervous anticipation of the next drop from a nonexistent place (a compound, “the dream”).

Yet this nervous anticipation reveals itself as meaningless. As the very title of the project confirms, it’s too late (every time you’re reading this, you’re reading this: it’s always too late). The catastrophe has happened already and continues to happen, a truth never clearer than in 2020. The embarrassment of being Jimmy from “Degrassi” (discussed on “Energy” and “Star67”) and getting overlooked in favor of Ludacris (see “How Bout Now”) has occurred, and no amount of money or muscle can change that. Shame, experienced initially and replayed ad infinitum, is personal apocalypse, a virus never undone.

The great thing about If You’re Reading This It’s Too Late is that, more than any other Drake album, it holds together all kinds of efforts to conceal this and, buried beneath them, a recognition of this ever-happening apocalypse. It’s easy to hate on him for being overly self-involved, but Drake’s extensive engagement with himself helps us sit with contemporary humanity’s infinite contradictions: the self gnawing at itself, the kind of reflection that hides as much as it reveals. We recognize, through his most accomplished project to date, that there is a moving forward through time that presents the possibility of embodied change, and the past disaster is always present.

A tale of two different films, the first a study of blossoming interpersonal communication…