David Lynch’s return to television in 2017 was for many an explosive triumph that upended the expectations and expanded the possibilities of serial drama. Yet in a career of multiple peaks and valleys, his vision and idiosyncrasy has as often as not played on and emerged from the traditional basics of storytelling. While the Lynchian aesthetic is so often considered out of left field, suitable only for the initiated, his work nevertheless taps something as universal as dreams, and something as essentially human as the need for love and affection. So, if the director’s follow-up to his experimental feature debut seems like a corny 180-degree turn into common respectability, sure, it may be that. But for all its old-fashioned air, The Elephant Man still gets at the core of what makes Lynch tick as much as anything in his oeuvre.

Lynch fans sometimes feel that the auteur’s depiction of authority and old fashioned white picket-fence values is a sly indictment of conservative politics, but Lynch has an earnest admiration for Ronald Reagan. This earnestness drives Lynch’s very personal imagery. He genuinely means what he says, but his personal meaning may not be obvious, and this mystery leads to all sorts of wild interpretations of his work. But despite Lynch’s stylistic innovation and occasionally grotesque subject matter, he is at heart a storyteller in love with cinema, and he shows that love in a peculiarly earnest way. The hideous disfigurement of Joseph Merrick (frequently misidentified as John) may seem a natural subject for Lynch’s dark vision. But Merrick’s is also a very human story, and while that sentiment may be at odds with what fans expect from the avant-garde filmmaker, this too is a perfect subject for Lynch the old-fashioned storyteller, weaving beautiful and frightening stories out of light and shadow.

Lynch was coming from the complete creative control and minuscule resources of an independent production to a studio picture with a significant budget and distinguished cast. That cast was not always happy with Lynch’s reticent directorial style. John Gielgud wasn’t sure what Lynch thought of his performance and had to ask him afterward, and Anthony Hopkins complained that his director gave him little guidance. But it is the imagery that makes the film, and even though the movie has been dismissed in Lynch’s oeuvre as being fairly conventional, it’s remarkable how much of his visual style remains intact. His vision of Industrial Age London is not far removed from the dark factories of Eraserhead, the smoke billowing from Victorian smokestacks as ominous as any in his previous film. The Elephant Man reveals traces of what came before it and what came next, it’s close-up of a mother’s eye filling the screen suggesting the opening of his ill-fated Dune. 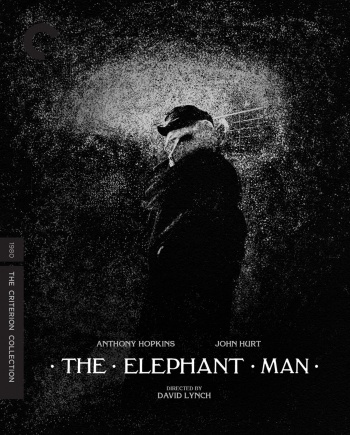 According to Greg Olson’s exhaustive study David Lynch: Beautiful Dark, producer Stuart Cornfield had read the Elephant Man script by Christopher De Vore and Eric Bergren (written before Bernard Pomerance’s play became a surprise Broadway hit), and mentioned it to Lynch. The director told NPR host Terry Gross in the ’90s that as soon as his producer said the words “elephant” and “man,” it “made a little noise in my head, and I knew I was going to do it.”

At the time, Lynch wasn’t even aware of the story of the 19th century Londoner, afflicted with neurofibromatosis at the age of 21 months. Legend has it that Merrick’s mother was knocked down by a circus elephant while she was pregnant with her famous son, and this legend is printed in Lynch’s film, a seeming nightmare that may have some basis in fact.

Lynch understandably had trouble finding studio support for his project, and his major league tryout came at the hands of an unlikely champion: Mel Brooks. The comedian was looking for projects for his independent imprint Brooksfilms, and Cornfield screened Eraserhead for him. Brooks got it, finding the film funny and beautiful, comparing the film to Beckett and Ionesco. Brooks also backed Lynch up when he wanted to shoot the film in black and white. The cinematography by the great Freddie Francis was a meeting of old school and the new. I was fortunate to see a 35mm print of the film several years ago, and the deep, rich tones that serve the melodrama so well paint the faces of its stars in the same dramatic chiaroscuro that shaded Lynch’s dreams and nightmare visions.

If Eraserhead seemed like it was nearly all a dream, The Elephant Man is for the most part literal, albeit a reality photographed by a master technician who bathed the images of this avant-garde director in light that recalled great Hollywood romance. This romance is the very thing that gives Merrick hope. In one of the film’s most Lynchian sequences, a trip to the theater gives Merrick the kind of magical, dancing visions you expect to see in a Lynch film. As strange and modern as Lynch’s vision is, The Elephant Man looks back to cinema’s beginnings, with its images of locomotives and cinematic tricks that recall Georges Méliès.

When Doctor Frederick Treves (Hopkins) first presents Merrick to his colleagues, his startling laundry list of deformities ends with the remark that Merrick’s genitals are intact. This isn’t a cheeky detail. The movie acknowledges the basic desires that lie underneath the most seemingly hideous surface. Along with the need for warmth, Merrick needs to dream. With Eraserhead, the director offered his bold new vision of cinema. With The Elephant Man, he showed that such strange dreams are as old as cinema itself. At a particularly divisive time in which half of the country is likely to consider the other half as little more than animals, we should all recognize that, however hideous the other might appear to us, they’re a human being too.