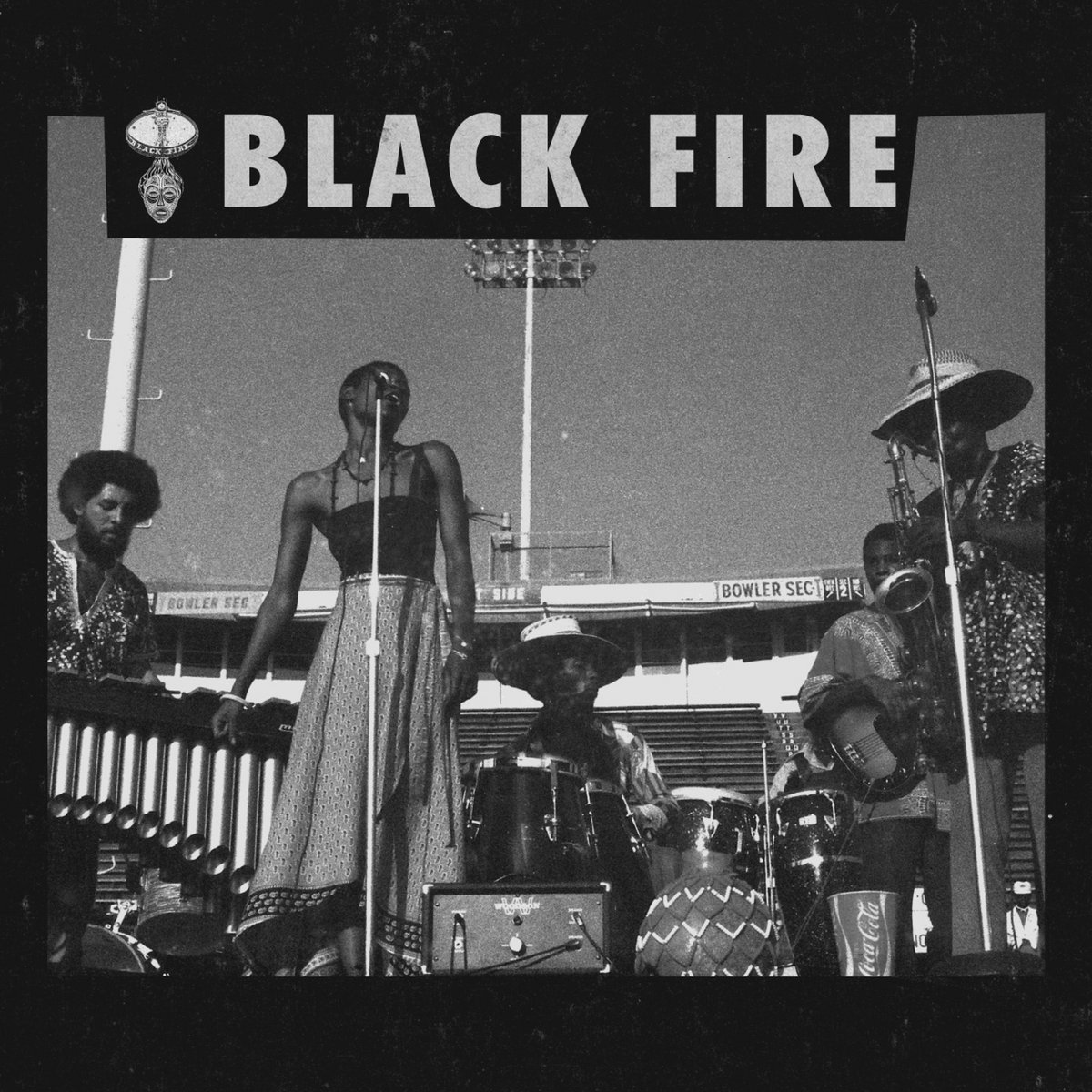 The story of Black Fire Records is really that of Afrocentric jazz-funk ensemble Oneness of Juju and their leader, James “Plunky” Branch. After having released a pair of albums for the Strata-East label (1973’s A Message from Mozambique and 1974’s Chapter Two: Nia) under the Juju moniker, Branch met up with Richmond, Virginia, DJ and record promoter Jimmy Gray. The latter had been responsible for a publication called Black Fire that had featured a copy of one of the Juju albums on its cover. Contacting Strata-East to find out more about the magazine, Branch was connected with Gray, who in turn happened to be a third-party promoter for Strata-East in the mid-Atlantic (Gray’s big claim to fame in this regard was helping with the distribution of Gil Scott-Heron’s Winter in America). Finding a mutual respect and a partnership built on a personal philosophy rooted in Black empowerment, the pair struck out together, forming the Black Fire Records label, whose flagship act would be the second incarnation of Juju, Oneness of Juju. Their debut for the label, 1975’s African Rhythms, would go on to become a coveted album. Playing heavy on jazz, funk, soul, and African music, it would define the label’s sound, well represented on the new compilation from Strut Records, Soul Love Now: The Black Fire Records Story 1975-1993.

Often compared to fellow independent jazz labels Strata-East and Tribe Records, Black Fire was similarly black-owned. The company owed their creative and business ethos to a post-Civil Rights Era sense of Black empowerment and celebration of Blackness, exemplified through music that was largely rooted in jazz and also borrowed heavily from consciousness soul and more spiritually-minded music in addition to the African rhythms touted in the title of Oneness of Juju’s debut. Because of this, the label not only granted its roster a great deal of artistic freedom – something no doubt helped by the fact that one of the co-founders was a musician who recorded on the label himself – but were also extremely progressive in their treatment of artists. In addition to what has been called “an extremely favorable royalty rate,” Black Fire assumed distribution costs provided the artists themselves assumed the cost of the first 1,000 albums pressed.

Unfortunately, neither the business model nor the label’s releases would be enough to sustain Black Fire in the long term. By the start of the ‘80s, the label had entered an extended period of dormancy after just a handful of wildly creative years that included a pair of Oneness of Juju albums as well as the equally crucial 1977 release by Experience Unlimited, Free Yourself. Somewhat surprisingly – perhaps due to a rights issue – nothing from Free Yourself or Experience Unlimited is present on the collection.

Conversely, however, Branch and either Juju or Oneness of Juju has three tracks, including the previously unreleased live recording of “African Rhythms,” recorded in December of 1975 at Howard University. Given the setting and the time in which the performance was captured, there’s a fiery resonance to Branch’s introductory remarks: “The most spiritual music in the ancient African days was the music that made you move. And we don’t want to have our music taken away by anybody. Consequently, we are doing this piece for our young people, primarily, our people who bump and boogie and grind like we did when we were growing up. That’s an African experience…So we created this piece so that we would have a piece of music that was spiritual, informative and, at the same time, something you can get off to.”

The statement effectively sums up the ethos of Black Fire Records and its artists. Theatre West’s “Children of Tomorrow’s Dream” is a soulful, almost ethereal groove redolent of the consciousness soul movement and the likes of Curtis Mayfield. Meanwhile, Byard Lancaster’s “Drummers from Ibadan” is built around an African drum groove, melded with flute and an instrument with a stridently metallic timbre that is at once hypnotic and driving in its rhythmic incessancy. Lon Moshe’s “Doin’ the Carvin’ for Thabo” is a bit of post-electric Miles jazz that rides an almost frenetic rhythmic crest, while Wayne Davis’s “Look at the People!” Is a bit of proto-disco soul boogie. There are plenty of instances of music that is spiritual, informative and, perhaps most importantly, something listeners “can get off to.”

While not a complete picture of Black Fire Records, Soul Love Now is a fine primer for the label, its artists and the ethos of comparable imprints operating in a post-Civil Rights Era/Black empowerment mode. If nothing else, it will serve as a fine introduction to a period of time and artistic mission statement that resonates as much in 2020 as it did in 1975.