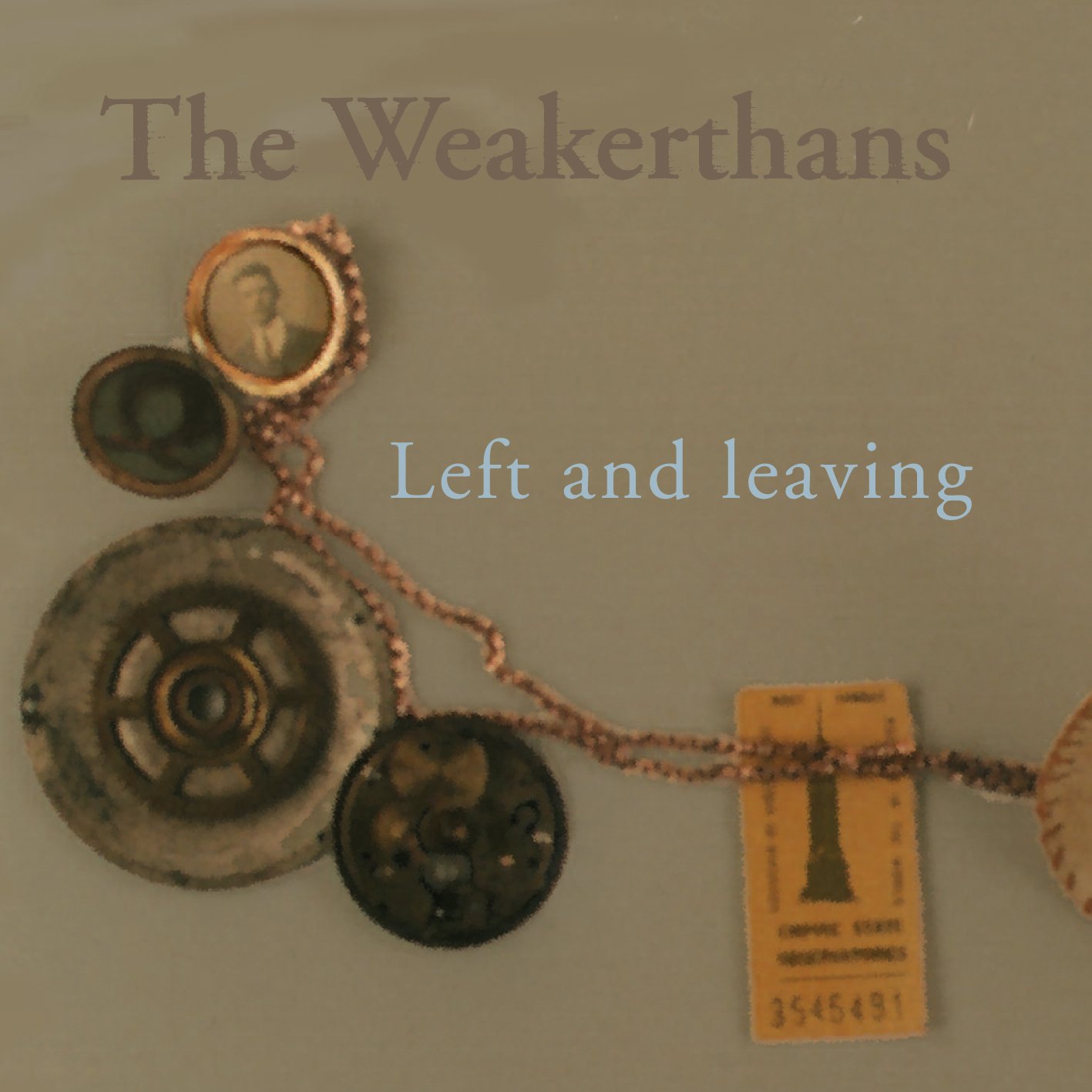 The ascension of John K. Samson as one of North America’s greatest songwriters seems like it came out of nowhere. When you listen to the songs he wrote in his time in legendary Canadian punk band Propagandhi, you can get glimpses of it – “Anchorless,” which showed up again on the Weakerthans’ 1997 debut, Fallow, is a perfect blueprint for where his songwriting would end up by the decade drew to a close, with its P.G. Wodehouse references and shoutouts to Manitoba (far and away the most common subject of his music). On the surface, Fallow could easily be mistaken for Propagandhi-lite, a bunch of lit-punk songs, but then he’d rattle off lines like “Stop the hardwood floor’s lopsided grin/ Leave the dirt and dead flowers in a brown coffee tin” or “Lukewarm coffee tastes like soap/ I trace your outline in spilled sugar/ Killing time and killing hope,” and it leaves you blinking in shock, wondering where imagery like that even came from.

The Weakerthans began as an outlet for Samson’s more emotionally honest songwriting, but it wasn’t until 2000’s Left and Leaving that this mission began to be truly fulfilled. These songs weren’t ever really “punk” – a few songs, like “This Is a Fire Door Never Leave Open” and “Exiles Among You,” spend their fair share of time shredding, but they lack the desire to inspire thrashing found before in “Confessions of a Futon‐Revolutionist.” Like Fallow, Left and Leaving starts out slow, but here it’s meant to be a notice of the shifting tide: “Everything Must Go!” kicks off with a few solemn notes plucked out on guitar and Samson’s voice, a pleasant departure from Fallow. “Garage sale Saturday/ I need to pay/ My heart’s outstanding bills,” Samson announces at the top of the song, before listing his wares, ranging from “The cutlery and coffee cups I stole from all-night restaurants” to “A sense of wonder/only slightly used.” It’s a dreamy start with a wandering middle section that helps us get up to speed with how the band has grown since last we saw them – these aren’t just some punks breaking off on their own, they’re talented musicians striving for something with a little more substance.

They don’t stay in a somber tone for long, though, and the one-two punch of “Aside” and “Watermark” is a great blend of the catchiness of Fallow with the newly-strengthened songwriting of Samson, and “Aside” is raring to introduce you to this new version of him: “I’m unconsoled/ I’m lonely/ I am so much better than I used to be,” he sings amidst chugging guitar riffs. “Aside” is ludicrously funny at times, with confessions about being scared of telephones, shopping malls and knives, and being too reliant on “alcohol and irony” and being “In love with love and lousy poetry.” “Watermark” is similarly laughable in how it delivers self-deprecation while wrapped in quasi-pop-punk catchiness: “I’ve got this store-bought way of saying I’m okay/ And you learned how to cry in total silence/ We’re talented and bright, we’re lonely and uptight/ We’ve found some lovely ways to disappoint.” Much like “Wellington’s Wednesdays” of Fallow, this pair of songs feels destined for exceedingly cool karaoke bars of North America, their mopiness too singable to truly get you down.

There will be other belters and hits before the end, but these two songs feel like a fakeout meant to ensnare you before hitting you with stranger songs. “Without Mythologies” is barely a song, with Samson’s hardly sung lyrics delivered more like a poem, surrounded by Jason Tait’s almost avant-garde drumming echoing in the emptiness that seems to surround the band, while the slowcore-flavored “Pamphleteer” gently warps Marxist sentiments and union rally songs while forcing you to Google what a Gestetner is. Later, on the brutally somber “History of the Defeated,” his lethargic voice is joined by Tait and a singing saw that, miraculously, doesn’t sound as bizarre or out of place as it should. The sound of Left and Leaving isn’t as focused as that of its follow-up Reconstruction Site, but their desire to attempt a whole mess of different styles pays off constantly, from the country-tinged “My Favourite Chords” to the towering riffs of “Exiles Among You” and “Elegy for Elsabet,” or the “band playing as the ship sinks” aesthetic of the violins on closer “Slips and Tangles.”

No matter the shape of the vessel used, every song here serves to convey a message of resignation to sorrow. The album’s title track serves as the heart wrenching centerpiece for the album as a whole and serves this goal as straightforwardly as possible. It’s an ode to the agony of distance and breakups, as Samson works to move on and pick up the pieces while surrounded by the painful memories of what he’s lost. It’s among the most punishing in his songbook, and lyrics like “I’m trying not to wonder where you are” and “Memory will rust and erode into lists/ Of all that you gave me/ A blanket, some matches, this pain in my chest/ The best parts of lonely” are almost too painful to bear if you’re hearing them in the throes of your own agonizing breakup.

The battle of “who’s left and who’s leaving” is practically the match of the century within Left and Leaving, and his relationship with absence permeates every song. What sets him apart from most songwriters – in both his writing about breakups and in general – is the radical empathy he exhibits on a near-constant basis. On the stunning “Elegy for Elsabet,” he eulogizes a young girl who lost her hearing, vividly painting the sounds of common life, from rain and thunder to horses and crickets. In his romantic dealings he’s never bitter, and though “Left and Leaving” ends on a hopeful note, its narrator waiting “in 4/4 time” for his lover to return, most every song concerning loss is delivered with resignation. “But now I will give up on this wall that I have fought with/ Never uncover meaning behind our rich words,” he sings on “Without Mythologies” before wishing to transform his subject into a raging river “So you could always meander/ And forever be able to run away,” while openly wondering why he sees his subject “in every mirrored window” on “Pamphleteer.”

These sentiments are the birth of a recurring theme within Samson’s work: all of the reasons why he should leave his home of Winnipeg, and all of the reasons why he simply cannot bring himself to do so. Winnipeg hangs around his neck like an albatross, its back lanes portrayed as a mess of dirty string, the city barely breathing “through buildings gone missing like teeth.” On “My Favourite Chords,” he accuses the mayor of “Killing kids to keep taxes down.” Even in “Watermark,” he and his friend fuck around on baggage carousels at the near-empty airport and fantasize that they’ve just arrived there, rather than using that same airport as an escape hatch. His relationship with Winnipeg would grow to become more profound in his songwriting, but even though he never proclaims “I hate Winnipeg,” that relationship looms large over the entirety of the record.

Left and Leaving was all it took to transform Samson into the beloved songwriter he’d grow to be, though the two Weakerthans records that would follow – 2003’s Reconstruction Site and 2007’s Reunion Tour – would tell their stories from the point of view of clearer characters, perhaps as a way of maintaining distance from the sorrow that exists in so many of his songs. He’d learn to more elegantly blend the two in his solo albums Provincial and Winter Wheat, both of which continue to explore his relationship with Winnipeg even more directly than he did with the Weakerthans. But the directness of this batch of songs and the ease of relating to so many of the feelings of isolation and heartbreak expressed within are huge parts of why Left and Leaving has endured as a career-defining work.