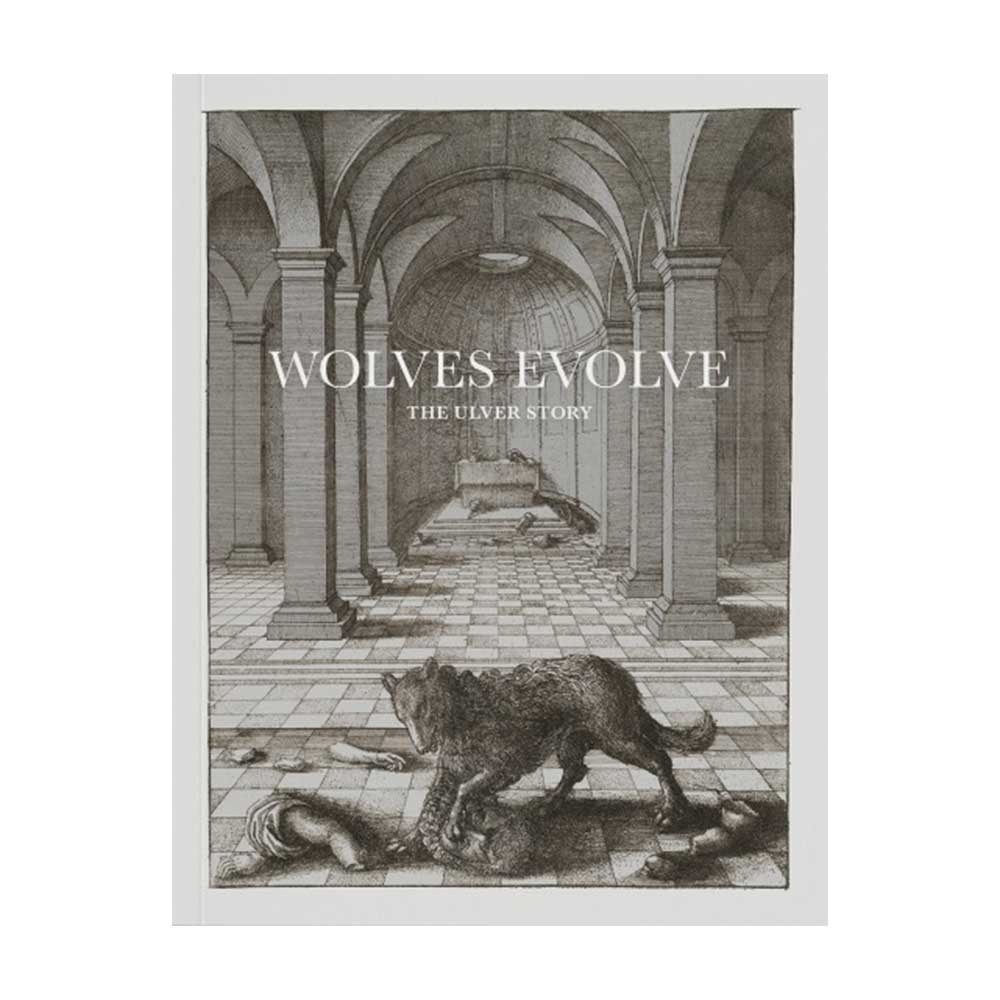 If any band is overdue for an explanation, it’s Ulver. The band’s stylistic evolution has gained more notoriety than the music. From black metal to trip-hop to synth-wave, this Norwegian collective’s constant, and fruitful, battle against stagnation has remained shrouded in mystery. Ulver has spent 27 years avoiding the questions until now. Tore Engelsen Espedal endeavors to put a “who” and a “why” with the “what” in Wolves Evolve: The Ulver Story. This career retrospective weaves conversations with (and between) Ulver’s mastermind Kristopher Rygg, core members Tore Ylwizaker and Jørn H. Sværen (and other key personnel) into a thoughtful, informative read.

To reiterate, Wolves Evolve is more than a collection of interviews with the band. Up until this point, Ulver interviews often seemed confusing by design. Perhaps they needed to talk to the right person – someone like Espedal, who picked up Ulver’s 1995 debut record Bergtatt as a teenager. His interest has increased with each curveball the band throws, which gives this book a rare nexus of perspective, personality and narrative thrust.

The story naturally starts with Ulver’s exploits within the Norwegian black metal scene. Contrasting Rygg’s current perspective with the interview published in the 11th issue of Slayer Magazine is telling, as he acknowledges the mythologizing he practiced under the name “Garm” in order to fit in with the “Black Circle” of the late Øystein “Euronymous” Aarseth. His more detached appraisal of his youth puts the oft-romanticized and dramatized black metal movement in an interesting light. Still, the archival photos and insightful accounts illuminate these fateful beginnings – like why ex-guitarist Ali Reza played a key role in the unique sound of 1993 demo Vargnatt, or the unexpected reason 1996’s neo-folk foray Kveldssanger happened at all.

The input from Sværen, who didn’t join Ulver until it had already left metal behind entirely, helps shed light on the band’s radical disillusionment with metal as a whole. Rygg even jokes about the numerous offers Ulver has received to play songs from Bergtatt and Nattens Madrigal at major metal festivals. A bit of flattery from Espedal does coax Rygg into acknowledging the enduring influence of the “Black Metal Trilogie,” even if people still occasionally yell out song names from that era during their most recent tours.

Rygg even cites, rightly, that Kveldssanger, the album he’d most like to forget, as the inception of the current wave of black-metal adjacent trad-folk/ritual ambient groups like Heilung and Wardruna. Even if Rygg and his bandmates tend to view this era as an albatross around Ulver’s neck, reading stories of spirited teens making influential music is as close to warm fuzzies as black metal can get.

Even more intimidating than Nattens Madrigal’s ultra-raw assault is the labyrinth of a discography that followed. Press and listeners alike have struggled to make heads or tales of it for 20 years, so Rygg and pianist/programer Ylwisaker talking through the infamous Blake album, and the series of EPs and soundtracks that followed, proves indispensable. The two still seem as perplexed by their 1998 companion piece to William Blake’s The Marriage of Heaven and Hell as everyone else was when it dropped.

By contrast, they remember the urbanized beat music of Perdition City (2000) and even the Teachings in Silence duology (2002) with a certain clarity. They especially zero in on their ambient masterwork “Not Saved,” which has apparently influenced the Ulver sound for years. Through these insights, Ulver’s artistic vision begins to reveal itself. A particularly interesting discussion contrasts the dark-prog of Blood Inside (2005) with the minimalist grandeur of Shadows of the Sun (2007). The albums’ duality proves aesthetically premeditated, as the two interviewees spotlight Shadows of the Sun as a precipice in their artistic trajectory.

That album, along with the 2013 Tromsø Chamber Orchestra collaboration Messe I.X-VI.X, are given a full breakdown treatment. Respectively written by Phil Alexander and Nile Bowie, these sections point out underlying profundities in both releases. These two analyses encapsulate Espedal’s reverent vision for this book. Wolves Evolve seeks to pay tribute to the illustrious career of a group so many treat as “the band who used to play metal.”

Instead of soldiering straight on to The Assassination of Julius Caesar (2017) and Flowers of Evil (2020), Espedal talks with Rygg and Ylwizaker about the various shenanigans that ensued once Ulver became a touring band. Near-death experiences notwithstanding, Ulver’s decision to play shows clearly played a pivotal role in the band finding itself and relating to its audience. There’s even a fantastic bit of fanservice via Torolf Kroglund’s review of the band’s 2009 performance at Maihaugsalen, Lillehammer, Norway. His observation of Pitchfork music snobs and Burzum-shirt wearing black metallers united in admiration of one band goes to show the irreplaceable niche Ulver operates in.

With the context that Ulver had to cancel last year’s attempt at a United States tour due to lack of ticket sales, the final passage of Wolves Evolve becomes bittersweet. Ulver seems hopeful about the establishing power of these past two album cycles. It’s about time they left behind the bitter trve kvlters pining for the return of Madrigal. On one hand, Rygg seems more at peace with Ulver’s current place. On the other, he seems less hopeful about continued touring – mind you, this perspective predates COVID-19.

At this point, the pandemic leaves the future of Ulver as nebulous as the future of the music industry in general. For that reason alone, a book like this could not have come at a more appropriate time. Throwing all of the chips on the table, Espedal has fashioned a tome of deep respect and utmost care. Newbies should pick Wolves Evolve up before even trying to understand Ulver, but even the most ardent fans will come away from it with newfound understanding and appreciation of what these Norwegians have accomplished.