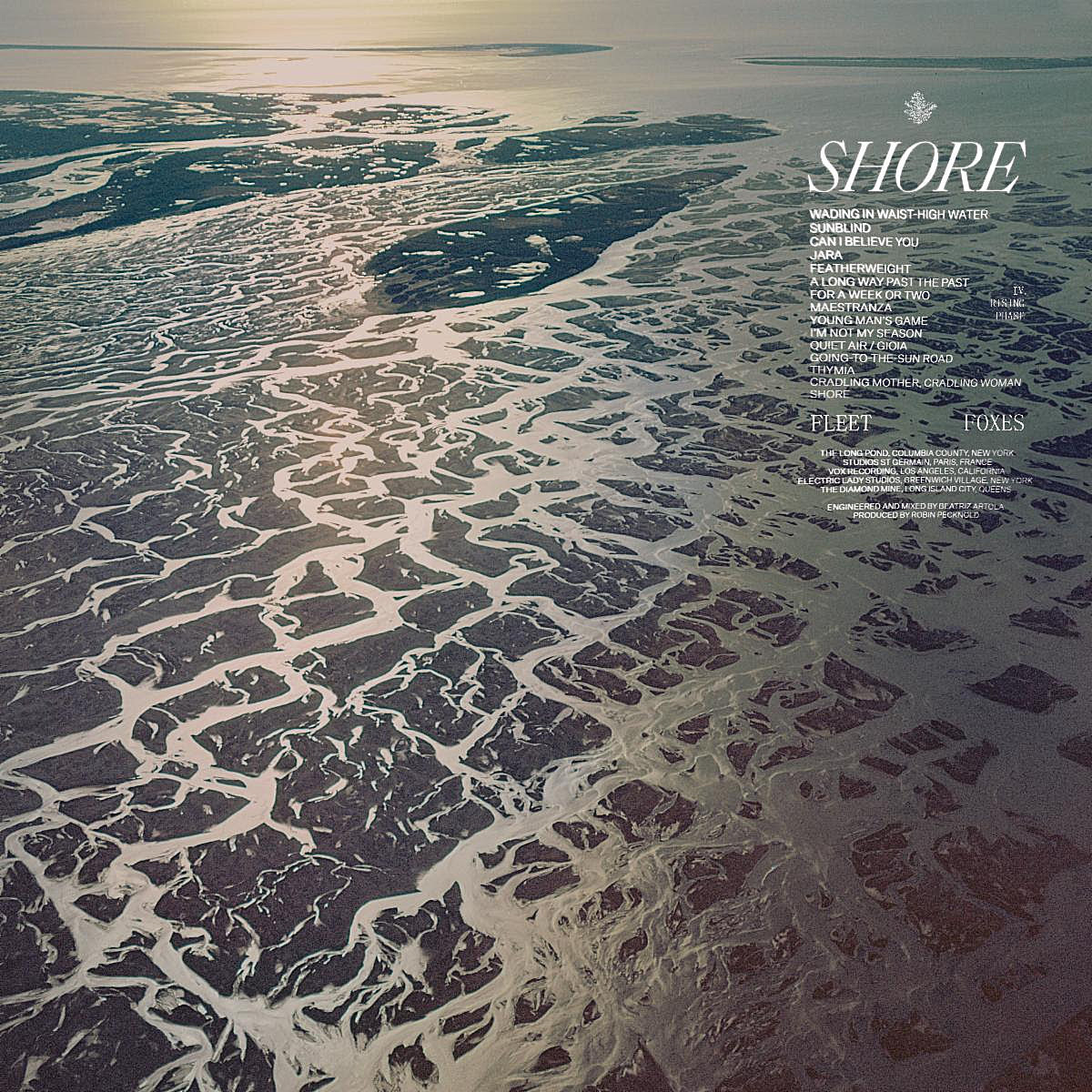 About half way through the new Fleet Foxes album, Shore, lead singer and mastermind Robin Pecknold sings, “I’ve been lucky as sin/ Not one thing in my way/ Just the arena I was in/ But it’s a young man’s game.” Usually this kind of statement would imply a positive towards the rising stars who can keep the pace stronger and faster than veterans. But here, Pecknold plainly indicates that the young man’s game is over, it’s time to grow up and move on from your previous beliefs and accept this new world that’s crushing down you. Now in his 30s, this fleeting fox has come to grips with the themes he was struggling with back in 2008 when the band debuted.

Across all of the Fleet Foxes’ albums the concept of age has permeated. “I was raised up believing/ I was somehow unique/ Like a snowflake/ Distinct among snowflakes” he whispered on “Helplessness Blues.” And now nearly a decade removed from that song and album, Pecknold has settled into this realism that the world is a nastier place than he once thought. This isn’t skipping over the darkness he confined himself to on 2017’s masterful Crack-Up, Shore just finds Pecknold moving beyond the despair the last four years have given everyone, and moves closer to a positive bleakness – even though his words don’t always convey that.

Some of Shore’s most mesmerizing moments, and there are a lot of them, are when Pecknold is honest with not just himself but his listener – “And I feel worn/ But the air is clean/ And my clothes are torn/ But its right on me” he admits on “Cradling Mother, Cradling Woman.” He’s not an old fart, but he’s more mature, and Shore embraces this new mentality. Pecknold has always felt like an old soul trapped in a young man’s body. Every Fleet Foxes album has washed its hands in the maturity pool but Shore dives in. All of the compositions here are firm. There’s very little meandering or experimentation – something Crack-Up embraced and used to its benefit. When it does veer into the abstract, like on the title track’s faint melodies towards its finale, it’s brief and not distracting – keeping the album in line with its structure.

Compared to previous outings, Shore is more instantly gratifying. Similar to their debut, it doesn’t build up to anything it just presents 15 tracks in 55 minutes with very little padding. Its choruses drip with honey like the yesteryear folk albums that acted as protest music during the 1970s. “Sunblind” pays homage to Pecknold’s heroes – David Berman, Richard Swift, Jeff Buckley, Elliott Smith – legends of indie rock and folk music who will never die despite having passed on. And while it seems so typical to write a tribute to these icons it never reaches a moment of silliness. Instead, it feels natural because we all know Pecknold.

Those influences run strongly through Shore. The core of the sunny “Jara” recalls Brian Wilson’s SMILE as Pecknold reflects on the pandemic, “First sight of the first good morning/ Since you’ve been out of town/ First time any violet omens/ Don’t shadow me around.” Elsewhere, the Bill Withers-tinged “Maestranza” bounces and bops to its chorus, “Now that a light is on/ Now that the water runs/ And the heartless are nearly gone/ No time to get it wrong” all with a stunning hook that drives home the harmonies. The power of the Fleet Foxes’ sound has always been to move the listener in directions of comfort, so the warm embrace felt in moments like these are all part of Pecknold’s goal.

Shore also seems to indicate that the Fleet Foxes is now a solo project by Pecknold. Per the liner notes, there’s a tremendous amount of guests – the first vocals on the record’s opening track “Wading in Waist-High Water” are from Uwade Akhere. Kevin Morby adds vocals to “Sunblind” while Hamilton Leithauser’s kids sing on “Young Man’s Game.” The Westerlies provide most of Pecknold’s instrumental support along with percussion assistance from Christopher Bear and guitar from Daniel Rossen both from acclaimed indie rock counterparts Grizzly Bear.

All of the themes present on Shore can be summed up with centerpiece “I’m Not My Season,” a song Pecknold wrote after a conversation with a friend about addiction. Using his gift for imagery, he wrote this piece to reflect a sailing lesson – rescuing someone who has fallen overboard – and relating it to helping someone through tough times. In a time when everyone seems to be drowning in something – depression, anxiety, grief – Shore acts as that extended hand pulling you out – “Holding on close/ Holding on to/ Any kind of ring I can bring you.” Pecknold is saving lives here, and anyone struggling with the times need only listen and reach back.

Work began on Shore during the Crack-Up days and extended into 2018. It’s not necessarily a product of quarantine, but it is one of those rare albums that feels completely appropriate at this moment in time, perfect for those who need their spirits lifted. “May that last long year be forgiven/ All that war left within it,” Pecknold prays on “Featherweight.” As we near November, and the world appears to be in shambles and crumbling beneath us daily, Shore feels like a cleansing of all the meanness and degradation that’s been in the air for a few years now. It’s blissful, hopeful and natural, a welcome warm hug in a time of despair.