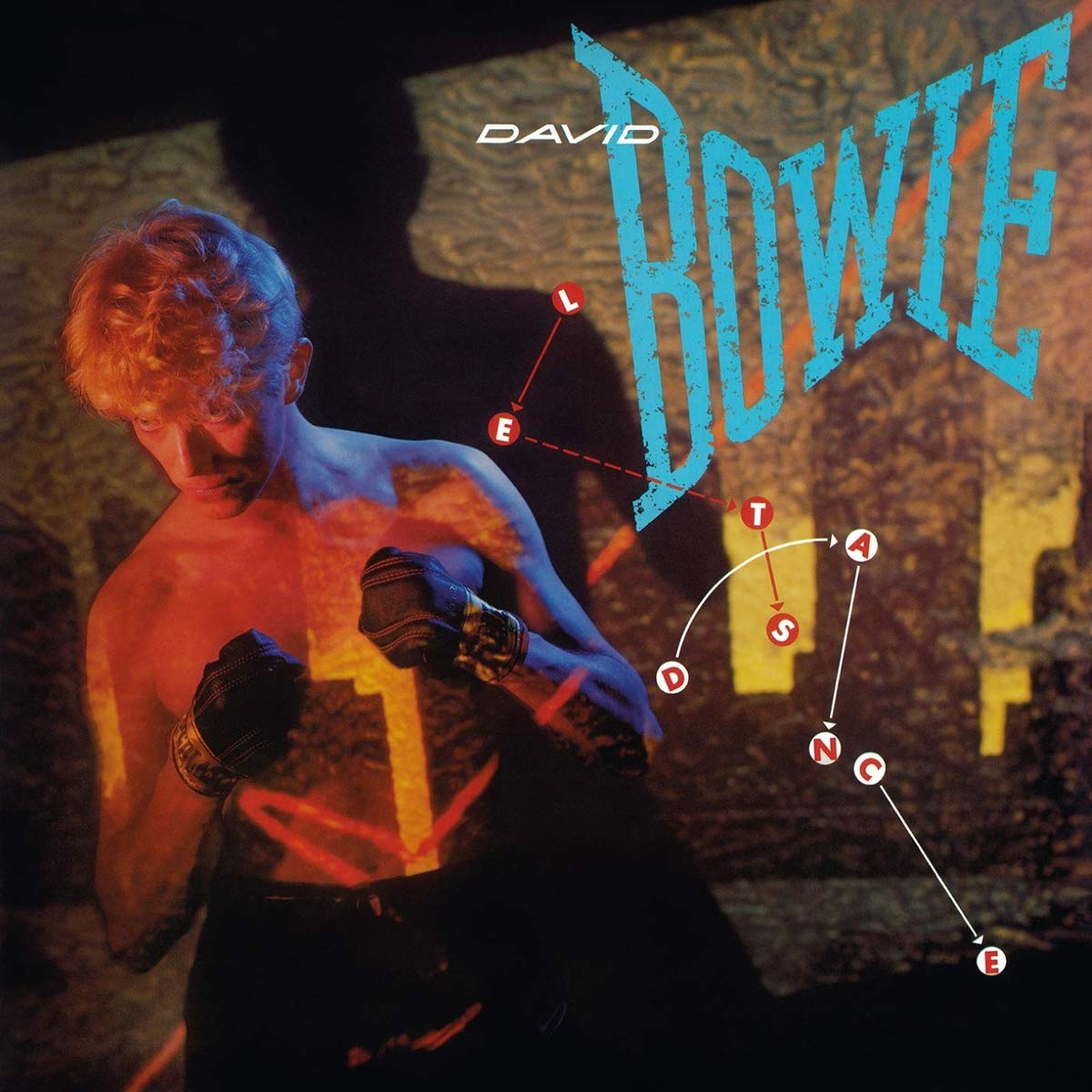 Upon its release, many critics of the day largely dismissed Let’s Danceas fluff. Robert Christgau wrote that “its perfunctory professional surface does make one wonder whether Bowie-the-thespian really cares much about pop music these days,” and Ken Tucker, despite some positive comments, held that “for all its surface beauty… there’s something thin and niggling aboutLet’s Dance.” They weren’t surprised at its commercial success — Let’s Dance went on to become Bowie’s best-selling album — but in their estimation it was flashy yet shallow.

As usual with Bowie, it’s important not to confuse the wrappings with the present. True, the album is taut with punchy percussion — tracks like “China Girl,” “Let’s Dance” and “Cat People (Putting Out Fire)” lured an ‘80s crowd onto the dance floor. Heavy echo on “Let’s Dance” served to elevate the perfectly quiffed platinum-blond singer above the crowd. And Bowie’s attire on the subsequent Serious Moonlight tour — white shirt with the sleeves rolled and a bow tie, untied, dangling insouciantly around his neck, suspenders and baggy trousers completing the New Wave look — only added to the implication that this Bowie, this time, was all about the market.

The look and sound may have been highly polished, but taking Let’s Dance at face value would be a mistake. Behind the gold sheen lie both depth and a dash of darkness. The cover art was a hint: an overlay of the lettering “L E T S D A N C E” in the format of a dance-step diagram on top of an image of Bowie in shadow-boxing attire, a pugilist preparing for battle.

The complexity starts with Bowie’s voice, a flexible instrument that he uses in myriad ways on the album. On “Modern Love,” his brash midrange complements the horn section. “Let’s Dance” sees him dive into a baritone growl, the fascist threats of “Fashion” softened into a commanding, sultry groan. “Criminal World” sports a confidential whisper, while on “Without You” Bowie soars to the top of his sweetest tenor.

“China Girl,” an Iggy Pop/Bowie song first recorded on Pop’s The Idiot, is transformed in Bowie’s hands. His voice starts in a low tenor, rolls to a desperate near-scream on the imperialist bridge, then collapses to a baritone mutter. The title is an uncomfortable play on words: the image of a fragile porcelain figurine cast against the racist dismissal of an Asian woman. The lyrics speak of a man struggling with, then accepting, his loss of control in a relationship. The song is now inextricably linked with the both highly sensual and consciously disturbing “racist-on-purpose” images of the award-winning David Mallet video; the whole package rides on top of infectious pop, a sensual bass lick and tight drums pumping against a loose guitar line. Bowie made it clear at the time that the message — like that of the video for “Let’s Dance” — was meant to be anti-racist, but “China Girl,” with the video’s imagery and the lyrical references to swastikas and imperialism, came across as ambiguous, even controversial to his 1980s audience. Bowie reportedly had a brief affair with his co-star, New Zealand model Geeling Ng; the chemistry between the two in the video is palpable, and the naked From Here to Eternity scene at the end led to the video being banned in several countries. Shocking or misguided though the video may have been, the track itself is a small masterpiece of composition, arrangement and execution.

The music of the title track, on the other hand, carried none of its video’s political weight. “Let’s Dance”’s lyrics start off almost embarrassingly light. But buoyed by the aforementioned echo, Bowie’s voice moves from sunny to pleading on the chorus, accented by the horn section and a thumping bassline. When a whisper of fog enters his tone on the second verse, the lines “For fear your grace should fall” and “For fear tonight is all” take on a haunting, near-ominous flavor. Throughout, the drum and bass punctuate; by the end of the song, when Bowie chants a repeated, severe “Let’s dance, let’s dance, let’s dance, let’s dance!” — a shout from which all joy has been excised — they create the inexorable feel of a tightening noose.

Bowie had crafted the record swiftly but with care, choosing Nile Rodgers (of Chic) over his then-usual go-to producer Tony Visconti (setting off hurt feelings that would prevent the two working together for almost 20 years) and pulling in lead guitarist Stevie Ray Vaughan, with Rodgers playing rhythm guitar instead of Carlos Alomar. Reportedly wanting to blend funk and blues with pop, Bowie and Rodgers brought in a slate of musicians which, for once, didn’t include Bowie himself. On “Let’s Dance,” he would be solely a singer.

The fresh recording of the Bowie/Moroder “Cat People (Putting Out Fire)” features New Wave percussion and chirping organ riffs, and howls with Vaughan’s one-minute-R&B, next-minute-rock guitar licks. This was not the circumscribed funk of the movie version of the song, nor the carefully-controlled tension of “Fashion” or “Scary Monsters (And Super Creeps).” In addition to the co-written “China Girl” and “Cat People (Putting Out Fire),” Bowie included a cover of Metro’s “Criminal World.” Peter Godwin, a former member of Metro, had charted the previous year with “Images of Heaven,” and Bowie’s interpretation of the hit bears a greater stylistic similarity to “Images of Heaven” than the original. Bowie’s voice on “Criminal World” is smaller and softer than Godwin’s, but the beat clicks as tightly.

Among the five Bowie compositions that complete the record is “Ricochet” — a mishmash of relentless drums, global-inspired bongos, displaced horn riffs, spoken-word poetics and clunky lyrics. It’s an almost-works track that partly pleases, partly frustrates. Some aspects collide, a problem Bowie was later to blame on Rodgers’ production. But Bowie’s own lyrics read like someone who’s trying too hard: “March of flowers — March of dimes/ These are the prisons, these are the crimes/ …Teaching life in a violent new way.” Bowie was no protest singer, but he was attempting explicit social commentary.

The brief, eight-track album wraps with the forgettable “Shake It,” but a later Ryko edition included the magnificent 1981 Queen collaboration “Under Pressure,” whose style prefigured that of Let’s Dance. Technically not a part of the album, “Under Pressure” would have been a far more powerful closer than “Shake It,” but as nearly every track on Let’s Dance got regular airplay in the 1980s, Bowie can be forgiven a clinker.

The mistake the critics made at the time was to take Let’s Dance at face value: “Bowie’s sold out; Bowie’s making commercial pop; Bowie’s run out of ideas.” Ever deliberate, Bowie was structuring both his image and his music with no less aim than in the past, and the unabashed popular sound of the album may make it his most insidious. Let’s Dance sold nearly 11 million copies, well above sales of his previous releases and reaching millions of new pairs of ears. This package, he thought, would be a perfect vehicle for the anti-racism message he hoped — per interviews at the time — to transmit.

But if the album’s packaging was part of the plan, its success may have formed a new kind of trap for Bowie. Quoted in Seconds magazine in 1995, he said, “I was treading water after that. I just didn’t have any real interest in writing or playing, it’s as simple as that. I just trotted out albums which, ironically, became very big albums for me. It was just the most incorrigible situation. I felt really frustrated because I saw myself in a cul-de-sac that I just loathed and hated.” Though his next release, Tonight, would hold several noteworthy tracks and there would be moments of brilliance on Never Let Me Down, neither album had the cohesiveness or freshness of Let’s Dance, which simultaneously made Bowie a rich man and complicated his artistic options. Not until Tin Machine was he to feel like himself again.

The video for “Let’s Dance” was filmed in Australia, and much of the action centers around a small pub in Carinda, a Blue Mountains town of fewer than 200 people. Filmmaker Mallet employed locals, both white and Aboriginal, placing them in juxtaposition, cranking the tune, and recording the reactions. Through it all, Bowie, unknown in this place, this time, lip-syncs against the front wall, a half-smile on his tanned face, his teeth still a little wonky, his hair glinting gold. He looks serious but relaxed, a man who is where he wants to be right now, doing what he intended. And that’s exactly how to hear Let’s Dance: beautiful, flawed, focused and absolutely intentional.

Never Let Me Down wasn’t all irredeemable, but even the better tunes were a mixed bag. …