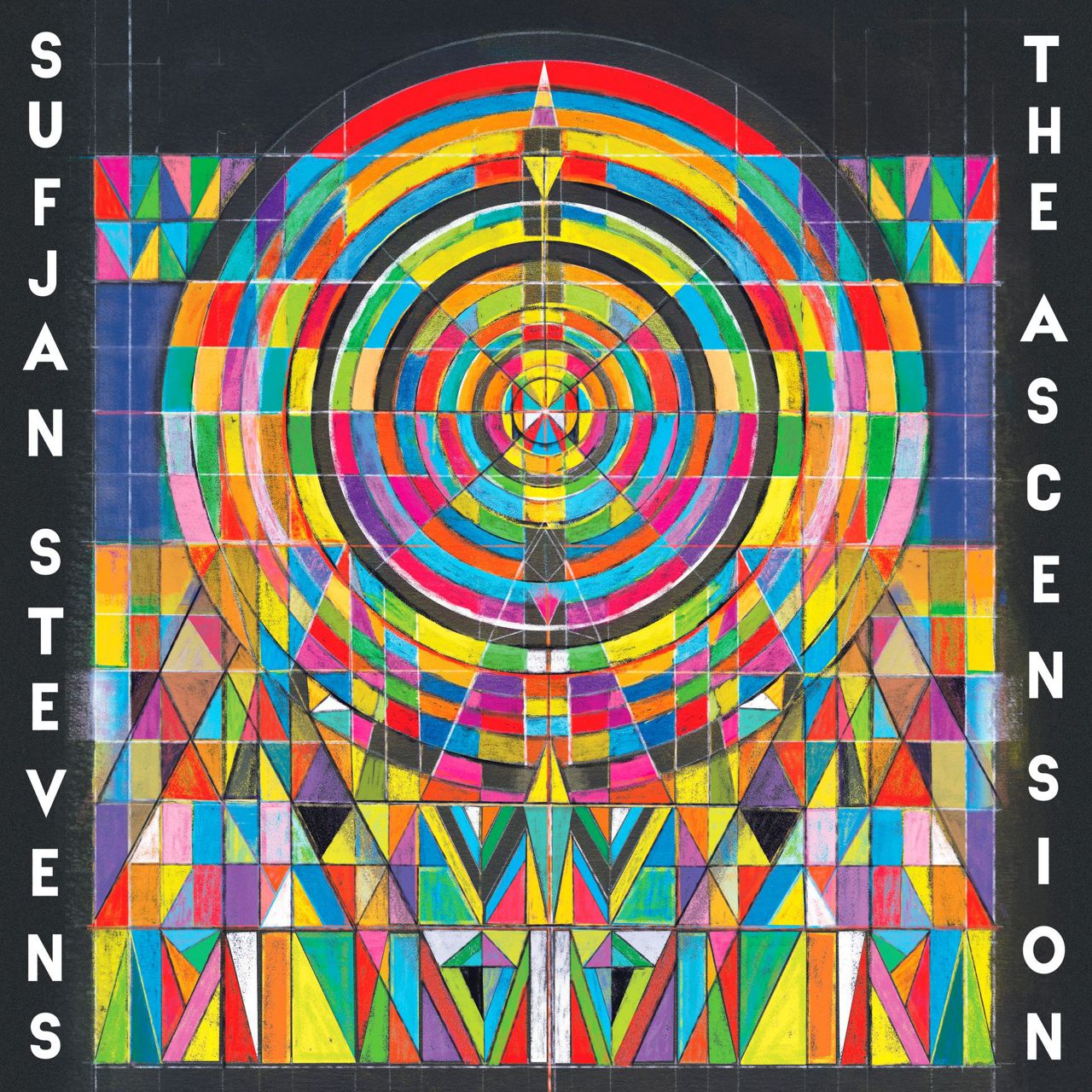 Perhaps, at the age of 45, Sufjan Stevens is becoming a grumpy old man, which would go a long way to explaining his new album, The Ascension. Yet I fear that idea is far too easy. Stevens has always played with our perceptions, especially live when he would appear like a cheerleader or wearing angel wings. It would seem that Stevens is asking us to look at the world we live in because as he looks at the world he’s beginning to sound a bit like David Byrne, “This is not my beautiful house/ This is not my beautiful car.”

The Ascension plays with our sense of balance. Instead of the simple acoustic sounds of Carrie & Lowell, we get a world of electronics, synths and drum machines. The guitars and banjos were put in storage while Stevens moved from Brooklyn to the remote landscapes of the Catskills. Reflecting on a world and culture that doesn’t make any sense, the electronics play to the schism between harmony and beauty and the more lewd and lascivious world that tends towards our basest instincts.

The building blocks or the world Stevens is reflecting on are fully displayed on “Make Me an Offer I Cannot Refuse.” Within the first few seconds a synth, followed by a goofy vocal lead into Sufjan singing, “Move me/ Move like waters I cannot drink/ I have lost my patience.” It’s a telling moment because we, like him, are standing at a crossroads, and most of the offers we have been given have only been too easy to resist. The synths build, creating a dense, unsettling wave that suddenly fades away.

In opposition to that, “Run Away with Me” offers a solution of sorts. There is a gentleness to electronics even as they build to fairly bold levels. We are living in a nightmare reality, “They will terrorize us/ With new confusion/ With the fear of life/ That sees to bring despair within.” Yet the answer Stevens offers is simple, “And I say, love/ Come run away with me.” Could the answer actually be that easy? Probably not, but it’s a notion that bears a certain currency in days of desperation.

Beginning like something out of a church setting with a synthesized organ, “Video Game” offers a look at Stevens standing up to all those people who want to put him into a particular box. He rejects the notion of being a savior, “I don’t wanna be your personal Jesus/ I don’t wanna live inside that flame/ In a way I wanna be my own believer/ I don’t wanna play your video game.” This is really a call for each of us to choose our own path, throwing out the notions that simply don’t apply.

Even in the darkest moments, there are answers. “Tell Me You Love Me” has a most gentle melody even as Stevens’ world is falling apart, “(My Love) Right now, I could use a change of heart/ (My love) Or a kiss before everything falls apart.” Yet as bleak a picture as he paints his closing lines tell a very different story, “I’m gonna love you every day/ I’m gonna love you.” And that’s really the dichotomy at the heart of this collection of songs, we are asked to make choices, and take chances.

This is one of the most dense collections of music Stevens has ever delivered. Even when the instrumentation is minimal there’s a feeling that he’s going out of his way to deliver a wide screen musical bed for his visions. This is not by any means a perfect set of songs, over the space of 15 songs in 80 minutes not everything works perfectly. Some songs are overlong and unruly, yet there are still moments that make even those songs seem worthwhile.

Challenging expectations is one of the things that Stevens has done again and again. The first single from this collection, “America,” certainly does that. In the early days of rock ‘n’ roll, no one would have ever thought about releasing a single that was over 12 minutes. No doubt times have changed, as have tastes. Yet this song was one that was rejected at the time of Carrie & Lowell. Coming back to it all these years later there’s a questioning and beauty that has never been needed more: “Is it love you’re after/ A sign of the flood or one more disaster/ Don’t do to me what you did to America.” It’s not exactly I Want to Hold Your Hand, but it certainly demands to be heard.

Certainly The Ascension is by no means perfect. Yet, Sufjan Stevens has created a work that deserves to heard. The more one listens, the more one begins to appreciate the density of this work and its ability to transform expectations.