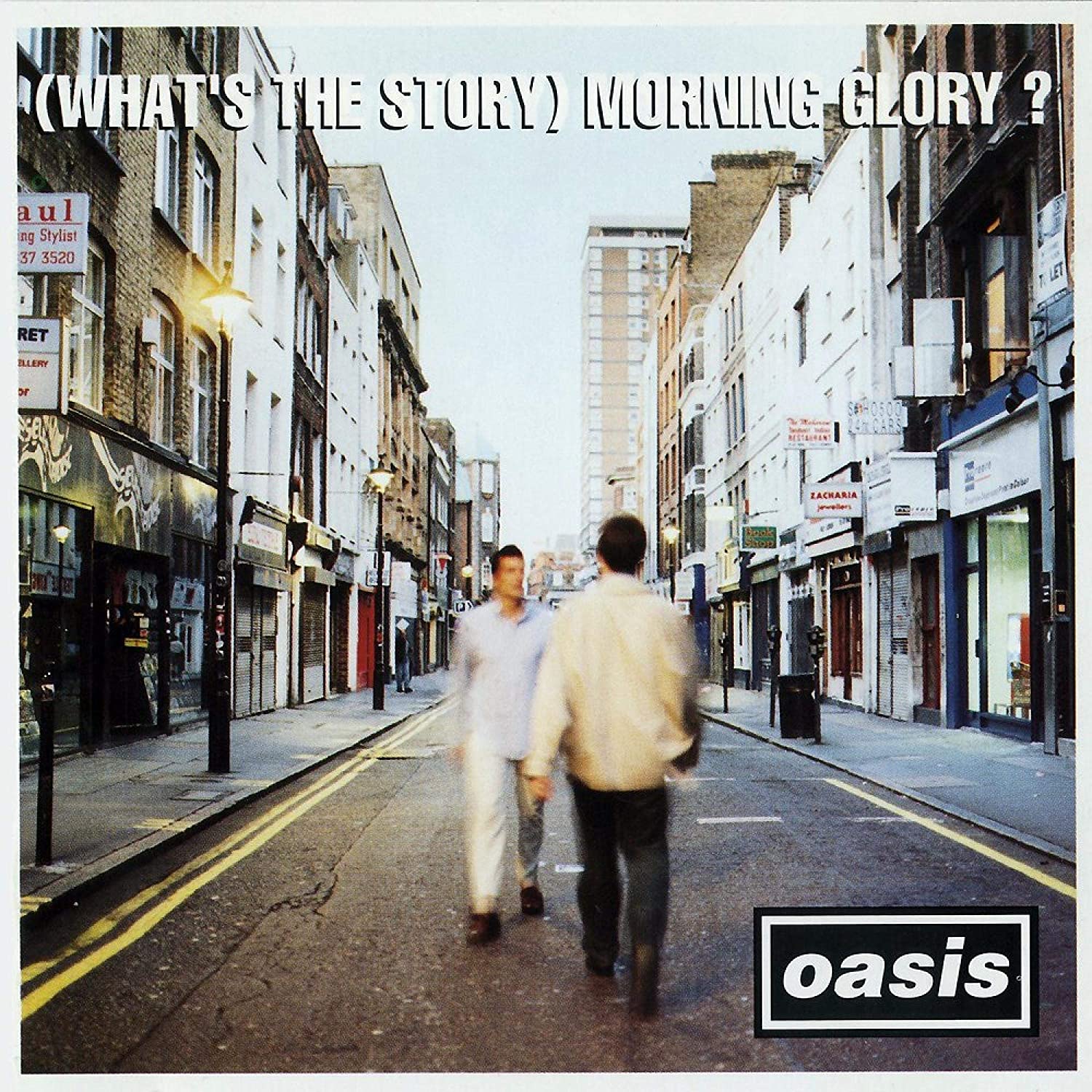 What do you call it when you lose the battle but win the war, only to end up losing in the grander scheme of things? Because looking back on (What’s the Story) Morning Glory? 25 years later, it’s almost impossible to separate the album from the events that preceded its release—as well as the fall that was to come. Oasis were only a year removed from their debut album, Definitely Maybe, when they locked horns with reigning Britpop champions Blur in the so-called “Battle of Britpop.” Definitely Maybe had been an instant success upon its release in 1994, going straight to the top of the UK Albums Chart and selling faster in the country than any other debut before it. (It also cracked the US Billboard 200 chart, which must’ve stung Blur.) When the dust settled on August 20, 1995, “Country House,” the lead single to Blur’s fourth album, The Great Escape, sold 274,000 copies in its first week, while Oasis’ “Roll With It” sold 216,000. Released a month later, The Great Escape went on to sell more than a million copies in its homeland—a respectable figure, no doubt—and those who still listen to it today remember it as a merely good album in a discography with a few great ones.

Morning Glory, on the other hand, became the kind of album that defines a musical movement, not just for its inhabitants but for the rest of the world. It outsold The Great Escape nearly five times over in the UK—where it remains the fifth-best-selling album ever—and moved another four million units in the US, making it the rare Britpop album that became a stateside smash. With 22 million copies sold worldwide, it’s one of the most successful records in the history of popular music, and it’s within the realm of possibility that this 25th anniversary vinyl reissue could have added another million to the total if it wasn’t a limited-edition affair. But at the same time, Morning Glory so perfectly captured the zeitgeist, and was so in tune with what young—and especially working-class—listeners wanted to hear, that it left Oasis, and Britpop as a whole, with seemingly nowhere to go but down.

Of course, very few bands ever reached the dizzying heights that Oasis did, and at first blush, it seems improbable as hell that these five Mancunian blokes became Britpop’s global ambassadors. While it isn’t quite right to say that class was Oasis’ secret weapon, it certainly set them apart from their peers, and was a factor in the band’s rise. Songwriter and elder Gallagher brother Noel couldn’t write detailed character studies like Blur’s Damon Albarn, nor could he match the witty observations of Pulp’s Jarvis Cocker, but his lyrics on Definitely Maybe depicted a sort of kitchen sink realism that felt real and relatable to anyone who anyone who felt trapped in a shitty job in a shitty part of town, as did countless Britons during and after Margaret Thatcher’s tenure as prime minister. And when younger Gallagher (and sworn nemesis) Liam sang his brother’s tales of dreaming of rock ‘n’ roll stardom and drinking and smoking (and snorting Alka-Seltzer) in his bratty, adenoidal snarl, they sounded like anthems. This was seized upon by the British tabloids, which framed the “Battle of Britpop” as a class conflict as much as a regional one: Oasis, the working-class heroes of the North, versus Blur, London’s art pop golden boys. But it’s also easy to see how the cynicism and desire for escapism in Noel’s lyrics might have resonated with grunge fans across the Atlantic. (Noel, bafflingly, once claimed that Kurt Cobain could have written “Wonderwall,” though perhaps that was the cocaine talking.)

None of that would have meant anything if Noel couldn’t write a decent tune to carry his words, and as the millions of copies that the album sold would suggest, Morning Glory features something like 10 of the best songs the man ever wrote, which is to say it features 10 of the best Britpop songs ever recorded. (Vinyl pressings of Morning Glory, this new one included, add the goofy throwaway “Bonehead’s Bank Holiday” to the track listing.) No longer dreaming about being a rock star but not yet writing the joyless and empty tales of rock stardom that weighed down Oasis’ middle period, Noel was instead composing the kind of effortless pop songs that real rock stars, like his heroes Johnny Marr and Paul Weller, wrote. It’s impossible to sing “Wonderwall” now without sounding like you’re taking the piss out of “Wonderwall”—thanks in part to Liam’s vocals, but more to the thousands of sensitive bro-types singing the damn song at open mic nights—but there’s a reason why it became Oasis’ signature song: its theme of not knowing how to say what you really want to say to someone will resonate with you if you’ve ever been young and in love, and it’s a total earworm to boot. “Don’t Look Back in Anger” is arguably even better, a soaring ode to keeping calm and carrying on that took on new meaning after the Manchester Arena bombing, and better still is “Champagne Supernova,” the kind of epic closer that, “Slowly walking down the hall/ Faster than a cannonball” be damned, makes “epic closer” sound inadequate. Even the songs that weren’t singles, like the jangly “She’s Electric” and “Cast No Shadow,” written in honor of the Verve frontman Richard Ashcroft, sounded every bit as killer and nothing like filler.

The knock against Noel is that he’s too obvious in borrowing from his influences. If you don’t hear the similarity between the guitar riff in the pseudo-title track and that of R.E.M.’s “The One I Love,” you’ll definitely notice that the opening piano chords for “Don’t Look Back in Anger” were nicked from John Lennon’s “Imagine”; turn your ear just right and you might even hear the spiky “Some Might Say” as a rewrite of Noel’s own “Cigarettes & Alcohol,” which itself cribbed from T. Rex’s “Get It On.” (The disgraced Gary Glitter gets a songwriting credit on “Hello,” whose melody is almost identical to Glitter’s “Hello, Hello, I’m Back Again,” while a song named “Step Out” sounded so much like Stevie Wonder’s “Uptight (Everything’s Alright)” that it was pulled from the album.) A less charitable way of reading this is that Noel’s a thief, albeit one with very good taste. But another way to think about it is in comparison to a hip-hop producer creating new beats out of old samples. (Also a proponent of this argument: Alex Niven, who wrote the 33 1/3 book on Definitely Maybe.) Raw materials like the guitar riff in “Hello” and the piano chords in “Don’t Look Back in Anger” sound grand even if they aren’t original, and that’s precisely why Noel uses them—to draw on that musical history, and to summon the same feelings that they did when they were first composed. (A stronger criticism of Noel is that he relegated several of his absolute best songs—“Acquiesce,” “The Masterplan”—to B-side status. Vexingly, this silver jubilee reissue includes none of Morning Glory’s mighty B-sides, nor any demos, live recordings or rarities.)

(What’s the Story) Morning Glory? may not have been Britpop’s musical peak, but it was undoubtedly held up as the apex of Britpop (and the wider Cool Britannia) as a cultural movement. When Oasis performed two sold-out shows in two nights at the 1996 Knebworth Festival—a concert that a staggering two-and-a-half million people applied for tickets to—it felt like a coronation, akin to watching the Beatles on The Ed Sullivan Show. But it was the last time Oasis could be credibly compared to the legendary band. Where Lennon and McCartney reinvented themselves year after year, not just writing songs but creating music, the Gallagher brothers went bigger without necessarily getting better, resulting in the bloated and pretentious Be Here Now. Sure, you could argue that at their height, it felt like Oasis really were bigger than the Fab Four, but regardless which side of the Atlantic you’re on, you’re a lot more likely to see a Beatles T-shirt when you go down to the pub (or the bar) than an Oasis T-shirt today. In the end, they stood for nothing—not for class revolution, not for artistic evolution, not even for Queen and country. Just a few short years after singing “Where were you while we were getting high?” on “Champagne Supernova,” the Gallaghers would learn that the highs they hit on Morning Glory, like all highs, just couldn’t last. But you didn’t have to be there with them to hear how the music did.