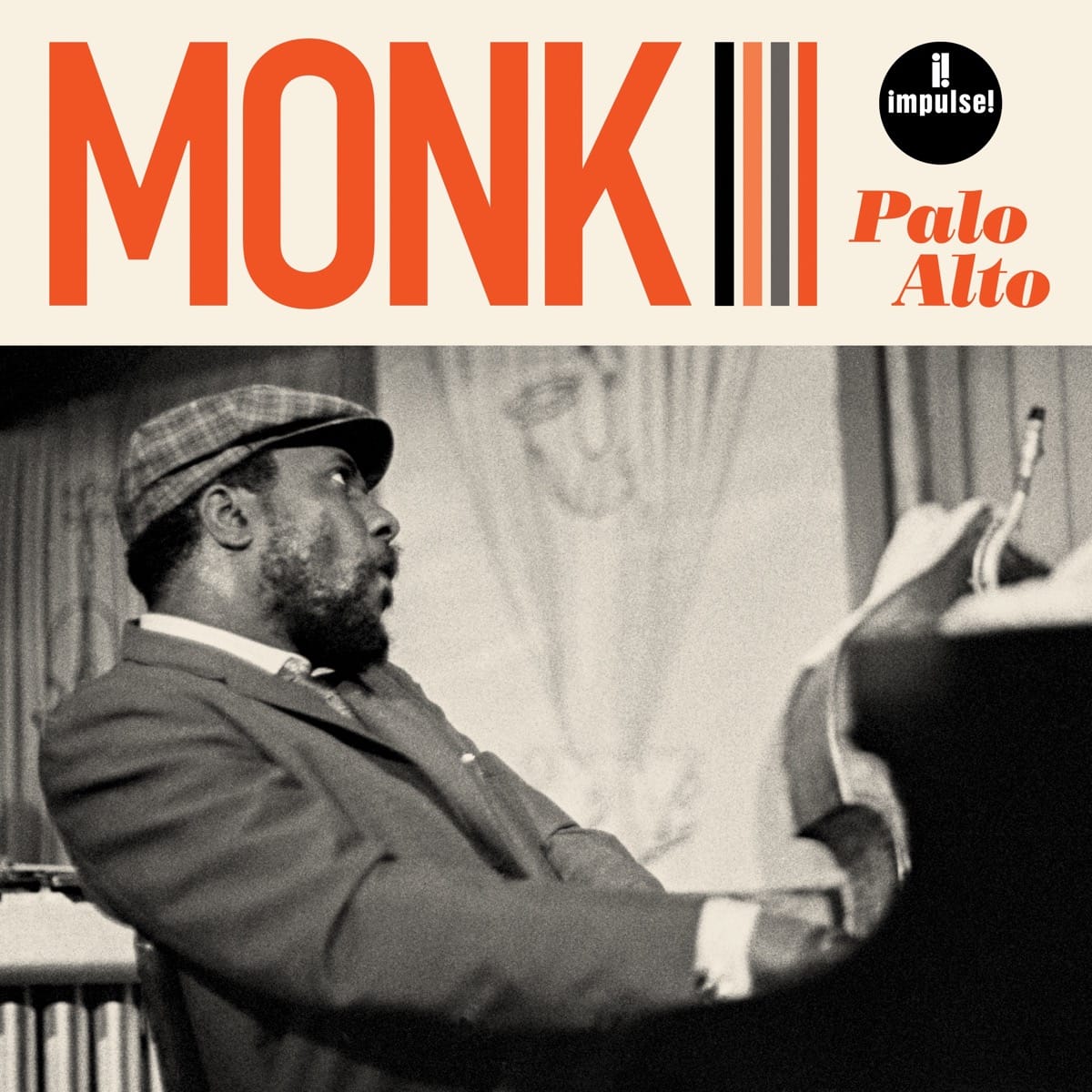 What makes this Thelonious Monk live set different from all the others? As much as you love standards like “Ruby, My Dear,” one of the great jazz ballads, do you really need another version, much less a live cut from an era when the jazz legend was arguably past his peak, prone to fall into a comfortable rut with his longtime collaborators like tenor saxophonist Charlie Rouse? And how much more would Monk turn it on for a high school audience than for a crowd of, say, jaded jazz aficionados in a smoky Paris nightclub? Palo Alto, whose release almost didn’t happen, proves to be a small miracle, revealing a veteran more engaged than on any live recording since his ‘50s prime.

If tracks you’ve heard a dozen times somehow sound fresh again, it’s in part due to the outstanding recording quality (taped by a high school janitor who also tuned the piano), and a small group energized by the timing and unlikely venue. “Ruby, My Dear” opens the set with the band tuning up, Monk trying out the keys and Rouse getting into gear before the leader drops a few chords and launches into his most wistful, autumnal composition. Monk seems a little off-mike, and Rouse, tentative at first, picks up some romantic steam. But, really, it’s drummer Ben Riley who sounds the most turned on. Monk and Rouse clearly play like men who’ve been this way hundreds of times, but something about the up-front drum sound makes the melodic improvisers seem more on their toes, refusing to phone in a tired performance of an old standby and instead investing it with an interplay that’s spare yet wise.

The drums end up being a surprising key to this set. Riley’s extended solo on an epic 13-minute “Well, You Needn’t” is a rare percussion showcase that’s of a piece with the leader’s vision. This isn’t a display of mere physical prowess, but a demonstration that Monk’s music is as much percussion as melody. With the drums so much in the forefront, it’s a reminder that even when Monk lets out an arpeggio it’s as much for rhythmic variety as melodic flourish.

Out of context, one might think the off-kilter fills of “Don’t Blame Me” come from an out of tune instrument, but the school custodian did not steer the band wrong. That’s just peak Monk, bending and tweaking the melody like he’s drunk on invention, besotted with the music that emerges between the lines and from impeccable timing that throws beats and chord progressions just a little bit off, climaxing with a series of dryly florid runs that are as gorgeous as they are hilarious; Monk had a dry sense of humor, seeming to parody ornate frills as he executes them perfectly and with just a touch of irony, enough that you can hear him winking just a bit but also hear him flexing his chops. The fact that you can hear the piano bench squeak can be distracting, but the sound grounds you in the physical moment, placing you right by his playful wiggling.

The (relatively) weak link on this 48-minute set might be “Blue Monk,” a solid 14-minite performance that probably won’t teach you anything new about the composer. Still, if Gales’ solo is fairly conventional, the pleasure here may come from how well his rich tone comes across. Again, Riley turns in a terrific solo, his rhythms shifting from nervous snares to bright toms and cymbals paced much like his leader’s solos and nearly as melodic.

Rouse was by then a 10-year veteran of Monk’s groups, and if he never had the sonic sheets of Coltrane or the fleet robustness of Sonny Rollins, there’s something to be said for the feeling that you could hear Rouse think as he played. Monk gave you the feeling that he was following directions wrong, coloring outside the lines just enough (and in a way that you could consciously hear his thought process) to make something old seem new again. That deliberation is part of why Rouse makes a perfect foil for the pianist.

The album closes with a wonderful fragment of Irving Berlin’s “I Love You (Sweetheart of All My Dreams),” which falls just shy of the perfect out-of-tune segment that you can hear on the soundtrack to the 1988 documentary Thelonious Monk: Straight, No Chaser. In a two-minute nutshell, Monk transforms an old chestnut into strange magic. This is the same group that Monk has on board for a nearly seven-minute version on the nevertheless essential Columbia album Monk, but where that studio track falls into somewhat ordinary patterns, Monk takes this short time to push at the edges of the melody, leaning into its old-fashioned air to get something honky-tonkish out of the well-tuned piano, all done with a sense of humor that’s ticklish and tender at the same time.

And to think that this music took place in the autumn of that most volatile year of 1968. Then-teenage promoter Danny Scher put together the program, which included a pair of local jazz groups. Monk took the gig, soon after a San Francisco date, because of his own financial straits at the time. Scher went into Black neighborhoods of East Palo Alto, then still smarting from the assassination of Martin Luther King, and brought that audience to white Palo Alto for a concert that, as the liner notes attest, unified a divided audience through the gift of music. Can we get that today, please?

Palo Alto isn’t just for fans, although it’s absolutely essential for anybody who’s ever stopped in their tracks when somebody plays “Ruby, My Dear.” This live set from late in the legend’s career may be as good a place as any to learn about what makes Monk one of the greatest of jazz legends: it samples his romantic side and percussive sensibilities as well as his sense of mischief and impeccable, exquisitely tricky rhythm, all through a handful of his best-known compositions with a superb ensemble on a particularly engaged live set. What more do you need?