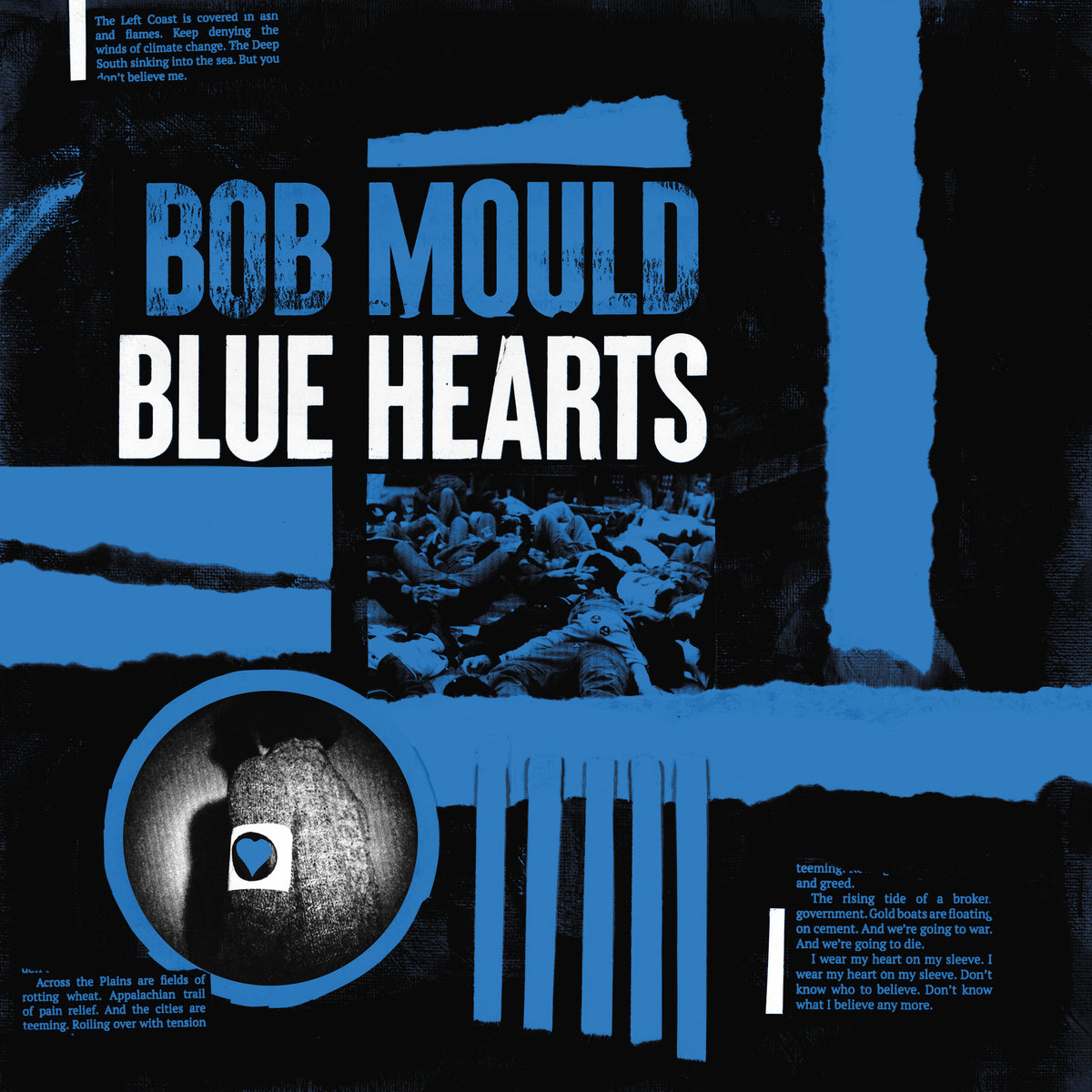 The catch-22: if an artist with a long career does something different, he abandons his core; if he does the same thing or looks back, he’s stuck in the past. Over 40 years into his career, Bob Mould has created enough kinds of music that maybe he can dodge that trap. At the same time, when his new album Blue Hearts suggests nothing in his career so much as his early work with Hüsker Dü, it might sound like a retread. However, Mould’s managed to take the energy and fury of his punk days and apply decades of musical experience to them to create something that properly uses the past. By drawing on Mould’s own background without getting stuck in it.

Blue Hearts begins with what could be a Mould solo folk song, as he despairs over “the rising tide of a broken government” and our modern epistemic crisis. Mould won’t settle for a sad coffeehouse appearance, though. The album stands as a sustained protest performance, Mould finding himself turned back into the fray. As he explains on the rallying “American Crisis,” “I never thought I’d see this bullshit again/ To come of age in the ’80s was bad enough/ We were marginalized and demonized/ I watched a lot of my generation die.” The happiness of last year’s Sunshine Rock needed a counterbalance, and Mould needed to get the anger out.

At times, the band’s punk roots stick out, the rhythm section – having been with Mould for a considerable time now – knowing just where to go and how close to push toward chaos. That drift isn’t too far; both drummer Jon Wurster and Jason Narducy hold nice edges in their frantic work, keeping the songs on the rails so that the content can come as a direct punch. Mould’s sand contains plenty of lines, and his band plays to make sure we have both the clarity and enthusiasm to get ourselves on the right side.

One of those lines comes on “Forecast of Rain”. Taking on religious hypocrisy, Mould sings, “Almighty spirit, so high upon Your holy throne/ I have a question so simple to answer, won’t take long/ This love thy neighbor thing, does it apply to all mankind?/ Or only those who fit neatly inside Your narrow lines?” Mould finds the political preaching to be blasphemous and it’s hard to know who the pending “40 days of rain” are actually coming for. The track’s tightness gives it force. By now we’ve tackled the politics, religion, the environment and more, and we’re only 10 minutes into the album.

Not all of the album works as an attack. “Siberian Butterfly” offers encouragement to anyone trying to find themselves. Even here in the sound of his pop-punk, Mould resists: much of the song is about preventing other people from pinning you down with their ideas about you. It also shows how Mould synthesizes his previous work. The punk energy remains as the anger turns to uplift, but a nice melodic sensibility develops in both the vocal and guitar solo. Blue Hearts is a punk protest, and the most Mould has taken this direct in close to 40 years, but it also brings in his alt-rock sound and his heightened sense of songwriting. It’s not time to throw away Zen Arcade, but as Blue Hearts joins the rotation, it won’t be so much a bookend as a happy (if unhappy) complement to a still unfolding conversation.

The Who: The Who Sell Out (Super Deluxe Edition)

As Who albums have been steadily reissued over the past 25 years, fans have grown accustom…