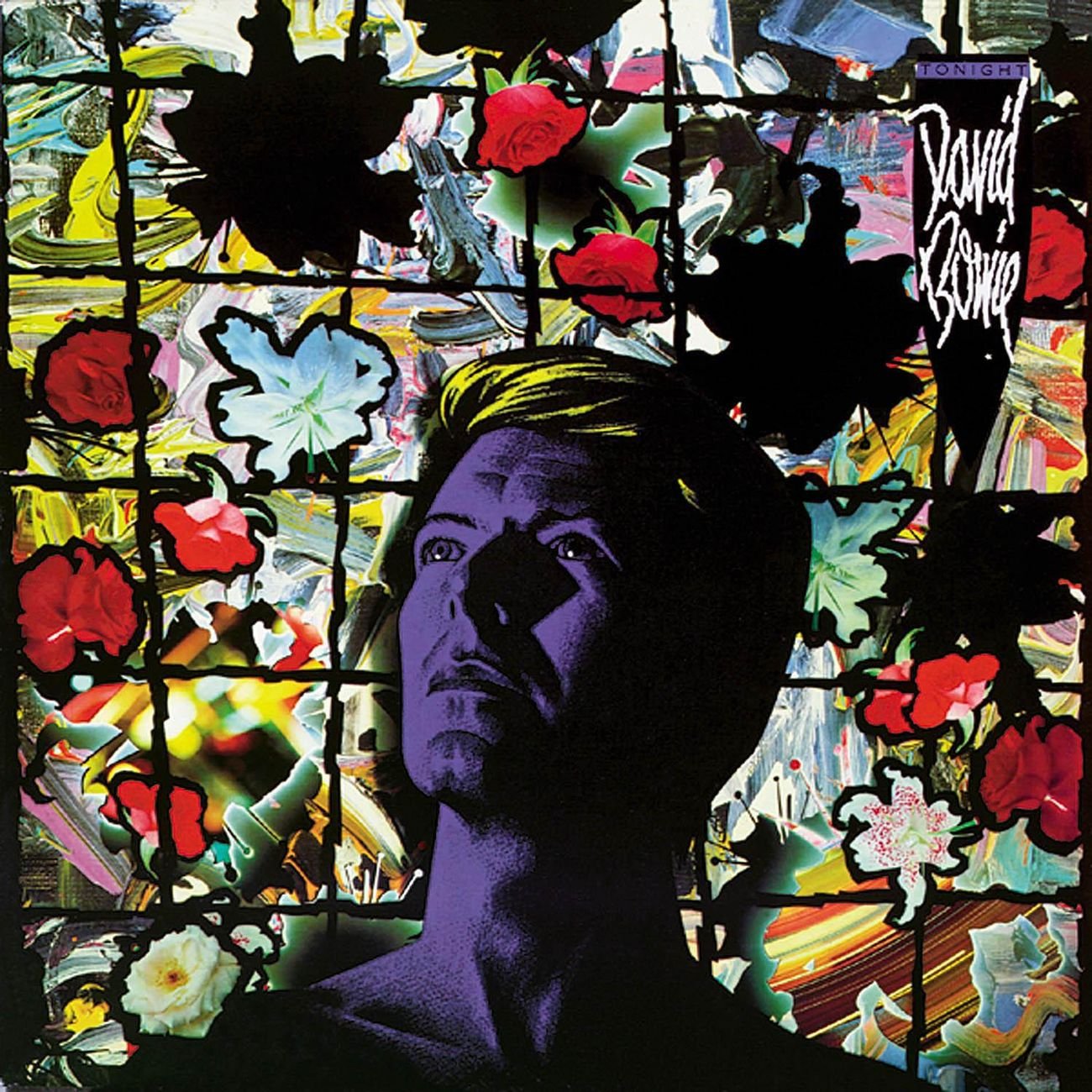 Being a fan of an album the artist wished he’d never recorded offers two choices: slink down into a dark void (with headphones) where you don’t have to acknowledge said album, or try to defend your deep appreciation for the LP-as-outcast. The narrative behind Tonight is telling. Seeking a new label and a new sound, Bowie signed a three-album contract with EMI. The first of the three was Let’s Dance, Bowie’s greatest commercial success, which brought him radio airplay, high-rotation music videos and the 96-stop Serious Moonlight tour. Unprecedented success can be exhausting, and fans and critics have argued that Bowie’s rush to record and release Tonight was a doomed venture. Instead of wishing it to be brilliant, what if we just accepted Tonight as a covers album? What if Bowie and EMI had marketed it that way?

Bowie wrote only two of the album’s nine tracks, along with five co-written by longtime collaborator Iggy Pop. Three of the five, originally released by Pop, would be considered covers, including the titular song. Enlisting Tina Turner, then also at the peak of her mainstream 1980s popularity, to accompany him on the song draws out an emotional resonance from Bowie that many find lacking on the other album’s tracks. In interviews over the years, Bowie looked back on recording Tonight during a time when he wasn’t particularly engaged with the music but felt pressured to follow up the tremendous success of Let’s Dance. The desire to retain the audience of new Bowie devotees led to an effort to reproduce the sound of Let’s Dance, but longtime fans and critics saw through the minimal effort Bowie put forward on Tonight.

The two original tracks carry threads of Bowie’s oeuvre: many find thematic similarities between the opening track, “Loving the Alien,” and the well-known songs relating to space and alien life: “Space Oddity,” “Life on Mars” and “Starman.” Those resonances may have helped some early fans to connect to the album and to find authenticity in what can also be seen as an album that feels insincere in terms of the artist failing to present his best creative and musical self. “Blue Jean,” the second song Bowie wrote for the album, recalls ths spirit of “The Jean Genie” and “Rebel Rebel,” threading another needle for longtime fans.

Along with “Tonight,” “Blue Jean” and “Loving the Alien” were the only tracks released as singles, and “Blue Jean” was the sole video release from Tonight. Considering the degree to which Bowie had effectively used video since the 1970s and especially in launching the MTV-era Let’s Dance, the lack of music videos from Tonight is surprising. It may, however, reflect Bowie’s disinterest in the album. The 1972 video of “The Jean Genie” and 1973’s “Life on Mars” are more enjoyable and even more palatable than the oh-so-1980s video of “Blue Jean.” Perhaps this is a cultural moment where the 1980s feel embarrassingly over the top: too much makeup, too many dancers, too many slim suits, too much misplaced drama. Maybe with another decade of critical and cultural distance, the aesthetic of the “Blue Jean” video will be distanced enough to appreciate.

Bowie’s cover of “I Keep Forgettin’” feels surprising like a 1980s song, since it was written in 1962 by songwriting masters Jerry Leiber and Mike Stoller, who count “Hound Dog” and “Stand By Me” among their hits. Bowie kept the Let’s Dance horns for this track and sings with an off-the-cuff enthusiasm that lifts the song’s energy. In his massive collection of Bowie essays Ashes to Ashes,” Chris O’Leary writes that “I Keep Forgettin’” sounds as if Bowie is “getting his voice in shape for ‘Blue Jean,’” adding that this version of the oft-recorded popular cover “is a party song as performed by your parents.” The other cover from the 1960s is also a surprise: Bowie’s rendition of the 1962 Beach Boys’ song “God Only Knows.” What Brian Wilson offered up as a tender love song has a different feel when David Bowie sings it. The lyrics carry an aura of a threat rather than romantic testimony: “If you should ever leave me / Though life would still go on, believe me / The world could show nothing to me / So what good would living do me.” While “God Only Knows” is not a corollary to The Police’s “Every Breath You Take,” the songs were released within a year of each other, making it more likely for listeners to sense a common thread.

“Don’t Look Down,” one of the strongest songs on Tonight, was written by Iggy Pop and his Stooges bandmate James Williamson and recorded on Pop’s 1979 album New Values. Bowie’s rendition carries a whistle-while-you-walk urban sensibility that does not admonish the listener to avoid looking down. Rather, he reports on his own experience: “I always hear that crazy sound / From New York to shanty town / There’s always something else / Don’t look down.” Not much of Tonight aims to be instructive, particularly since the album is more of a mash-up than a thoughtfully arranged set of songs. Listening in retrospect, it’s possible to feel a thread between “Don’t Look Down” and the songs on Never Let Me Down, but that may be just the wishful thinking of a listener who still cherishes the album Bowie and his critics came to loathe.

To the Friend Who Did Not Save My Life: by Hervé Guibert

Guibert writes about the secrets we keep: from society, from our closest friends, from fam…