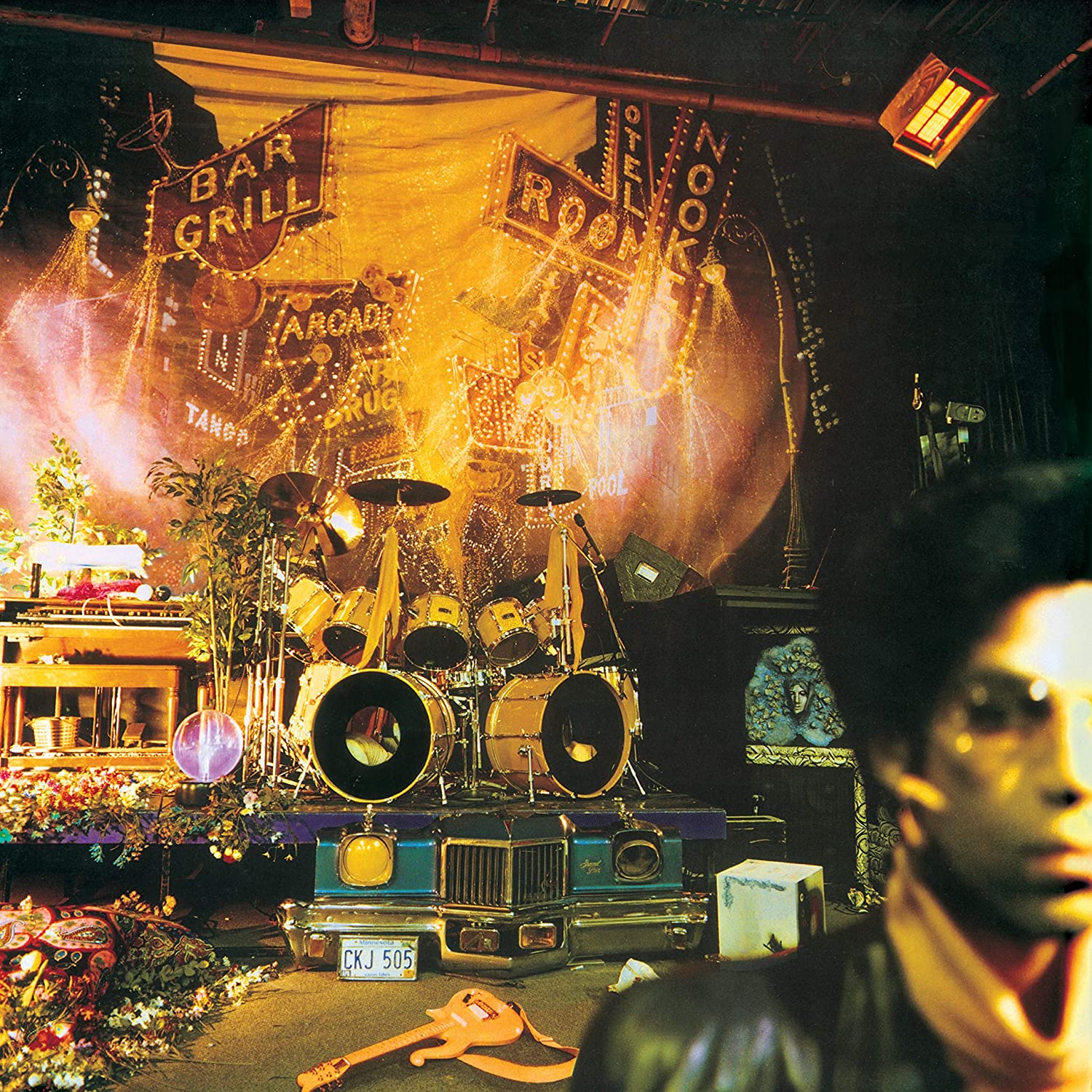 There are two truths that coexist around Sign ‘O’ the Times, Prince’s ninth album. One is that it is the result of a year’s worth of such artistic inspiration and personal strife that the finished record is a deep compromise of an even larger album the artist wished to make, either a combination of the Revolution double-record Dream Factory and pseudonymous solo LP Camille or a three-disc monster named Crystal Ball. The other truth is that even this re-recorded, embittered solo effort, whittled down to manageable length by Warner Bros’ standards, remains his most sweeping and impressive musical statement, a repository for all the styles he’d run riot through over the last decade.

From the apocalyptic Hendrixian trance of the opening title track (which replaces Prince’s usual attitude of dancing in the face of annihilation with a dead-eyed and resigned reaction from Prince toward a world steeped in AIDS, drug use and violence) all the way to the cooing R&B of “Adore,” SOTT moves with all the angularity one expects of a double-album, yet it never gets caught up in its stylistic whiplash. The opener moves with surprising fluidity into the hair-metal blast of “Play in the Sunshine” which in turn uses the abrupt crash into the skeletal funk of “Housequake” for extra emphasis.

The latter track is jarring within the context of Prince’s previous few albums, which had seen Prince de-emphasize his funky side in favor of a rockier side clearly aimed at crossover appeal back when “crossover” still meant a Black artist who appeals to white audiences. Starting with Purple Rain, Prince’s funkiest tracks tended to get placed on single b-sides, and at times he flirted with addressing this through his art: musically, Parade reflected the explicit thematic content of Under the Cherry Moon’s anxieties about the artistic and social limits to which white society will accept Black genius even when it conforms to their tastes. But this album brings back the funk in a major way, from the thumping stomp of “Housequake” to the electronic filth of “Hot Thing” and not-even-veiled double-entendres of the choppy “It.” There are also moments of brazen old-school soul, including the big-band brassiness of “Slow Love” and the sizzling version of gospel that infuses “The Cross,” Prince’s first blatant foray into religious music that would later define a significant portion of his output.

Other songs defy easy categorization. If “Raspberry Beret” had the faintest hint of country, “Forever in My Life” makes it all the more pronounced with a folk/soul hybrid that makes a smooth groove out of a twanging ode to fiancée Susannah Melvoin, already his ex by the time the album dropped. For an even deeper homage to Laurel Canyon’s proggy folk and particularly the profound influence of Joni Mitchell on Prince, look no further than “Starfish and Coffee,” a purer work of giddy psychedelia than anything on Around the World in a Day with its lilting strings and sun-kissed bliss. Mitchell is even namechecked in the album’s most genre-defiant track, the dizzying, impressionistic “The Ballad of Dorothy Parker,” a short story worthy of John Cheever more than the song’s namesake in its off-kilter, increasingly surreal observationalism. In terms of sonic adventurousness and lyrical audacity, the song is eclipsed only by “If I Was Your Girlfriend,” Prince’s answer to Kate Bush’s “Running up That Hill” that uses his pitch-shifted Camille voice to imagine a gender swap. At first, the track is surprisingly platonic, airing Prince’s genuine curiosity about what women think about outside of the company of men and how they relate to one another, and even when things turn inevitably and hilariously toward the lascivious, the artist’s earnestness in figuring out what women want and enjoy is as respectful as it is lustful.

Prince’s refusal to look backward kept this and his other albums from ever receiving reissues and remasters in life, but one listen of Warner’s new remaster compared to a prior release reveals that if there was any upshot in the artist removing so much of his best work from any renewed conversations, this did at least keep his albums from receiving the slapdash, over-compressed treatment that befell so many records remastered in the Loudness Wars. This new master stresses the subtleties and nuances of his complex arrangements over a mere boost in sound, revealing new layers to pored-over songs. The clarity and warmth of the low end throughout offers the latest reminder that Prince deserved to be ranked as one of the best bassists of his time along with his acknowledged guitar mastery. Great care was spent on preserving the dynamic range while opening up these songs, and the results are consistently revelatory.

Of course, the biggest draw of this reissue is the largest offering yet from Prince’s vault. This includes, as has become custom for Warner’s reissues, a disc devoted to alternate mixes and b-sides. The former don’t offer too much, barring some dance-floor ready extended versions of “Housequake” and “Hot Thing,” but both “Shockadelica” and “La La La, He, He, Hee” (and especially their own long versions) are some of Prince’s best tracks from this era, massive funk and rock workouts with slamming beats and acid guitar; the latter in particular suggests that the entire Madchester craze of mixing rock with cutting-edge electronic music was just catching up to Prince.

By all accounts, Prince recorded so much music throughout 1986 and 1987 that three full CDs of material being issued for the first time constitutes merely a percentage of the songs he wrote, composed, recorded and mastered on a near-daily basis. To go ahead and dispense with the complaint of a dedicated fan, the Super Deluxe Edition does not even include all of the tracks intended for the Dream Factory / Camille / Crystal Ball releases, thwarting hopes of finally being able to sequence one’s own versions of these albums with professionally mastered, non-bootlegged recordings. Admittedly, most of the absent tracks stand a good chance of making reissues of subsequent albums or were issued on a 1998 career-spanning vault clearance also titled Crystal Ball, but it’s frustrating not to have everything in one package. It feels especially egregious to only get the three-minute 7” mix of “Crystal Ball” over any of its prospective full-length versions, given that the art-funk epic stands as possibly his finest single track and the definitive summary of his ambitions during this period to cement himself as one of pop’s all-time most protean geniuses.

But these are minor quibbles compared to the joy of being able to (legally) trawl some of the finest music of Prince’s career for the first time. Highlights are innumerable but include the stop-start pop of “Teacher, Teacher,” the alternately spiky and soothing post-punk of “Eggplant,” or the slamming funk of Camille opener “Rebirth of the Flesh,” which can match wits with anything off The Black Album for sheer hardness. “Wally,” arguably the Prince song with the most lore, appears in the brighter, more lyrically ambiguous version he recorded after deleting a first pass that was more stripped-bare and honest about his failed relationship to Susannah Melvoin. The original, Revolution-backed version of “Strange Relationship,” complete with hypnotic programmed sitar and flute from Wendy and Lisa, is here, as are the supple hidden gems “Crucial” and “Adonis and Bathsheba,” each a slow-burner that most artists would have sold their grandmothers to release as a single at the height of the ‘80s ballad boom.

If the final album reflected the range of Prince’s eclectic influences and tastes, the vault cuts show just how wide that gamut could really run. Alternate versions of the same tracks show just how radically he could reorient a song; compare the ironically sunny first run-through of “Big Tall Wall” to its suffocating, cavernous, drum-led second version to hear relationship stresses turning from a distant worry into an immediate agony, or how the swinging funk of “Witness 4 the Prosecution” turned into overcomplicated art-pop. What really comes through here is how heavily Prince’s interests were turning to jazz: “In a Large Room with No Light” sounds so much like ‘80s fusion (heavily syncopated drums, shining keyboards and palm-muted guitar runs) that it’s no wonder he dusted it off to play the Montreux Jazz Festival in 2009, while “Can I Play with U?” finds him collaborating with Miles Davis himself. “Emotional Pump,” written specifically for Joni Mitchell, is a jazzy funk number that finds Prince playing bass as if he were trying to outshine Jaco Pastorius’s work on Hejira, and studio jam “Soul Psychodelicide” warps elements that would shape “It’s Gonna Be a Beautiful Night” around added elements of fusion, hard rock and smooth longueurs. Not everything here hits, and some songs are clearly sketches meant for later development, but for the first time one can actually empathize with Prince’s baffling frustrations with an uncharacteristically generous record label for refusing to flood the market with this glut of inspiration when he truly does have at least three LPs worth of gold just from this set alone.

Also included are two concerts, one on audio and the other on an accompanying DVD. The former, a gig in Utrecht, Netherlands, lacks some of the fire of other gigs from the tour; in fact, even a widely bootlegged performance of encore closer “It’s Gonna Be a Beautiful Night” from the same venue only two nights earlier smokes the one from this performance. Nonetheless, you can hear how easily Prince managed to convert an album made almost entirely by himself into a big-band extravaganza; “Play in the Sunshine” becomes an outright battle between his guitar shredding and Sheila E.’s drumming, while it’s nearly impossible to listen to the studio version of “I Could Never Take the Place of Your Man” after hearing Prince harmonize his riffs with a brass section. The DVD comes from the final gig of the tour, a benefit performance at Paisley Park that is altogether more incendiary and finds the band fully locked in on the material, and it even trots out Miles to assist on the closer.

Sign ‘O’ the Times is the result of several major shifts in Prince’s professional and personal life. It is informed by resentment over the increasingly muted reception to his albums along with the total ridicule of his first directorial film effort, a still-mysterious falling out with his band, and the collapse of a relationship that fueled many of the most beautiful songs he would ever write. Though the album did not shift as many units domestically as he had hoped (leading to his memorable snubbing of the US on his subsequent tour), Prince certainly succeeded in winning back the critics, who gave him the best notices of his career and elevated his status from maverick pop idol to genuine artistic genius. Looking back, the record announced a major new phase for the artist: it marked the start of a more aggressive interest in Black music styles, from jazz and funk to the emerging hip-hop scene; it helped turn an already guarded, private star into a truly insular, inscrutable artist; and it showed the first cracks in what would become possibly the most baffling artist vs. label fight of all time, maybe the only one in which even the majority of fans would side with the suits over the actual music maker. That an eight-disc set represents a generous sample of this seismic shift and not a thorough scavenging only reaffirms the magnitude of his achievement. Even if another disc or two of vital material could have been added to this package, this surely stands as the most significant vault airing of a single artist since Davis’ The Complete on the Corner Sessions.