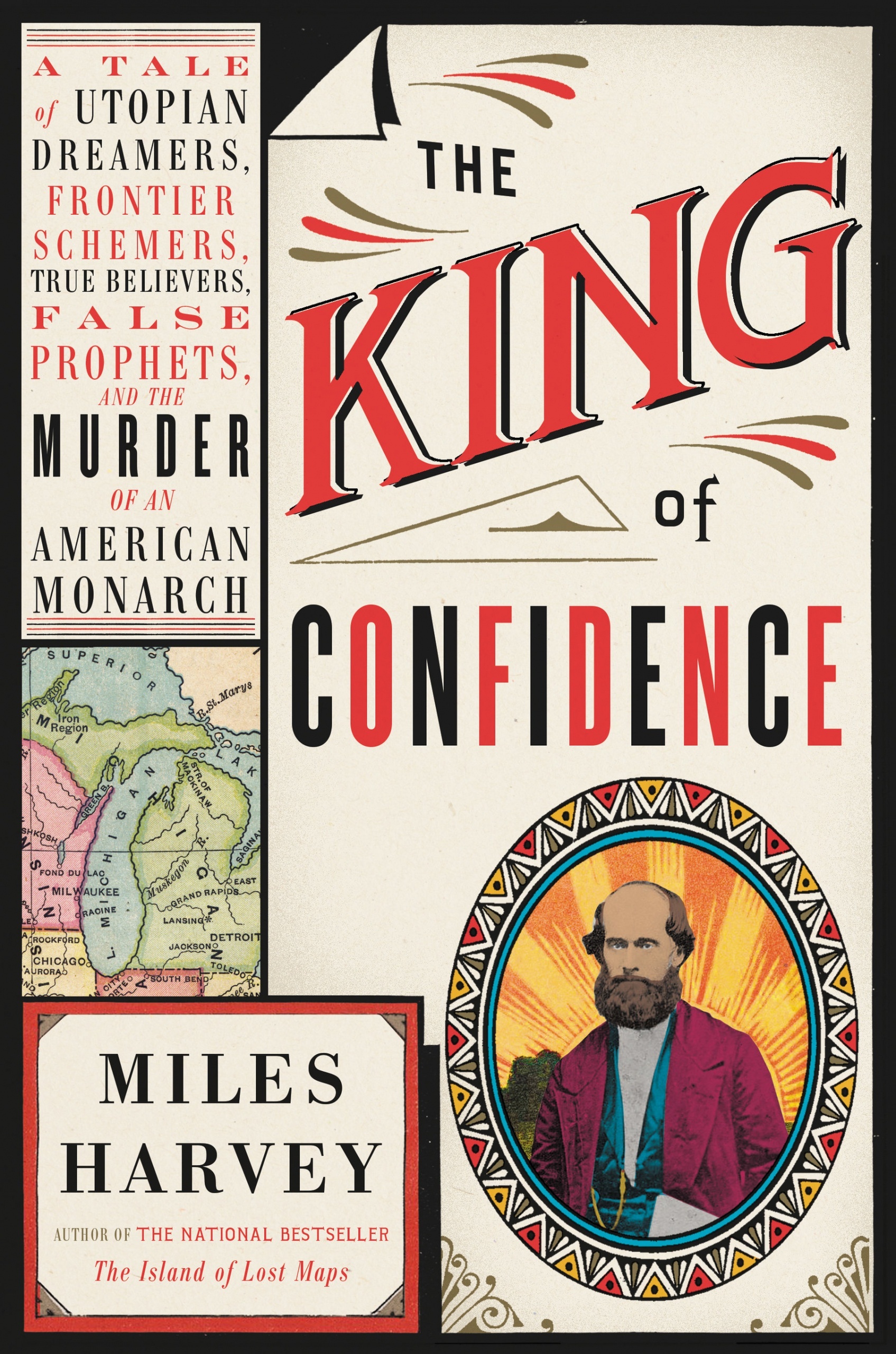 Were we not currently living through a new age of hucksterism and large-scale fraud, the story of the self-proclaimed King of Earth and Heaven, James Jesse Strang, would seem a cautionary tale from a bygone era. Instead, we can draw parallels between Strang, his ascendency to the head of the then-recently formed Mormon religion on a platform of lies – taking over through divine will following the murder of the religion’s founder, the equally duplicitous Joseph Smith – and our current presidential situation. In a time when a man could be anything simply by being persuasive and in possession of that most trusted of character traits, confidence, individuals like Strang and Smith thrived. So-called confidence men could rise to unimaginable levels of power and authority over otherwise fair-minded, even intelligent individuals simply by speaking with a level of confidence and authority that made even the most absurd statements and suppositions seem ironclad. In other words, the cult of personality was as strong in the mid-1800s as it remains to this day.

In the exhaustively researched The Kind of Confidence: A Tale of Utopian Dreamers, Frontier Schemers, True Believers, False Prophets, and the Murder of an American Monarch, Miles Harvey explores the improbable life and death of the man who would become King James Strang. From his roots in the “Burned Over District” of New York – so named because of the many religious fires that sprang up in an age when people were looking for anything (and anyone) to believe in – through to his brief association with Smith prior to the latter’s murder in 1844, to the establishment of his own Mormon strongholds in Wisconsin and finally on Beaver Island in northern Lake Michigan, Harvey brings the reader along on a truly wild, often unbelievable ride.

Having left his native New York under somewhat mysterious circumstances in order to further avoid the debt-collectors whom he’d attempt to screw over time and again, Strang, an avowed atheist in his younger days, made his way into the purview of Joseph Smith and the Mormons in Nauvoo, Illinois, in the waning days of the Mormon prophet’s rule. As with nearly everything in his life, Strang’s claim as Smith’s rightful heir, coming in the form of a letter of appointment allegedly signed by Smith prior to his death, was seen as highly suspect by those who knew Smith and the religion’s perceived new leader, Brigham Young. Being the ultimate confidence man, however, Strang struck to his guns, claiming not only that Smith had indeed appointed him his heir, but also been visited by angels (à la Smith) who guided him to mysterious plates (colorfully named the Rajah Manchou of Vorito brass plates) that only he could decipher.

From there, Strang established the Mormon city of Voree in Wisconsin, used his prolific powers of manipulating the truth – one of his many con jobs was editor of a newspaper in New York, a job that would help him immensely in shaping public opinion – to make it sound far more appealing and prosperous than it ever could’ve been. Drawing followers to his particular sect of Mormonism, Strang soon sought greener pastures for his flock, finally alighting on a remote northern Michigan island, Beaver Island, where he would establish his kingdom. Despite the massive Mormon migration to Utah led by Brigham Young, Strang managed to cultivate a fairly sizable following of his own, many of whom followed the prophet to Beaver Island, leaving behind Voree and the last vestiges of normalcy.

Once ensconced in his own little island kingdom, Strang began exerting even greater control over his followers and the dissemination of information, taking over the editorial reins of the Northern Islander, the local paper that would serve as his own proto-Twitter in attempting to discredit the naysayers and perceived enemies of the faithful. He also used this platform to sing his own praises, dictate women’s fashions (only pantaloons were allowed to be worn, a move both oddly progressive and possessive), threaten the lives of the Beaver Island locals and, eventually, others in northern Michigan and finally the rest of the state. Using his seemingly endless confidence in his abilities to win over the multitudes through the sheer force of his personality, Strang, not surprisingly, made a fair number of enemies along the way.

Yet before the ultimate which-one-is-gonna-end-up-murdering-him portion of the book, Strang manages to cheat his way into a position of power within the Michigan legislature – this after having but several years prior been seen as an unabashed criminal of the highest order for a number of offenses including, but not limited to counterfeiting and horse theft. Additionally, Strang, a formerly adamant anti-polygamist, began more than dabbling in taking on plural wives, the first of which traveled with him in drag acting as his personal secretary. And yet people continued to believe the words coming out of Strang’s mouth, apparently due to the degree of confidence he maintained in himself and the words coming out of his mouth, no matter how blatantly untruthful and vacuous they may have been.

Harvey employs a deft hand throughout, allowing the reader to draw their own parallels to a certain blowhard currently suffering the effects of a virus he long assured his followers was not a real or true threat to their continued existence. “…People like James Strang never really vanish,” he writes. “When the time is right, they reappear, wearing a new guise, exploiting new fears, offering new dreams of salvation. Americans are fixated on such figures, especially in periods of profound social and economic upheaval…So it is that the King of Confidence lives on.” In other words, the more things change, the more they remain the same. The King of Confidence is both a fascinating account of (to use Harvey’s choice descriptor of the era) “antebellum” America and cautionary tale of how these types of scenarios tend to play themselves out over time, never ending well for either the confidence men or their followers. Time will tell.