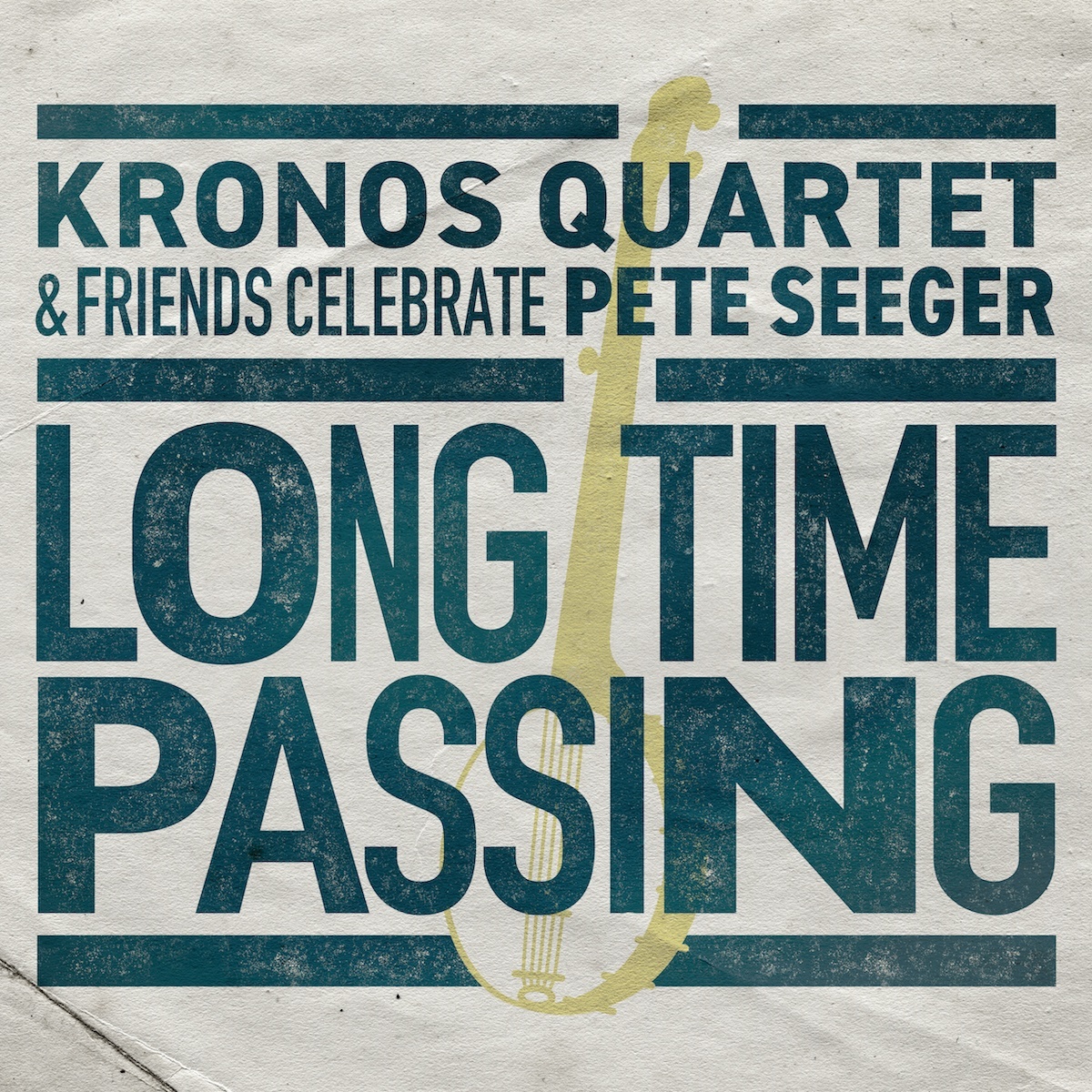 Long Time Passing: Kronos Quartet and Friends Celebrate Pete Seeger might seem, on the surface of things, like a noble attempt to celebrate or further canonize a legendary American folk artist. And, to some extent, yes, it is that; and, not to minimize, it’s also a wonderfully arranged and wonderfully performed LP, as good as anything we’ve come to expect from San Francisco’s iconic Kronos Quartet. But, make no mistake, Long Time Passing is a protest record. Released by Smithsonian Folkways less than a month before 2020’s incredibly consequential presidential election, it smartly makes no mention of Donald Trump or Joe Biden. But, in its heralding of a socialist icon, in the songs’ sequencing, and in the very intentional mention, by the late Seeger no less, of everything from climate change to the House Un-American Activities Committee, it is casting the die: be on the right side of history. And, we’ll say it: for the right (or maybe left) set of ears, it is the most welcome thing to come out of 2020.

The record doesn’t hesitate to take a big swing right out of the gate and land a big first punch, a rousing take on the union anthem “Which Side Are You On?” (By title alone, this should give you some hint of towards what Kronos Quartet is marching.) Now, it’s been almost 30 long years since Kronos Quartet released its mind-blowing take on the Willie Dixon-penned blues-guitar staple “Spoonful.” If “Which Side Are You On?” is any indication – and we think it is – they’ve only further sharpened their ability since 1993’s Short Stories to use a string quartet’s maximalism to elicit the resonance of instruments like an acoustic guitar or, this being Seeger territory, a banjo. On the track – and throughout – violist Hank Dutt and cellist Sunny Yang provide the thump of the banjo’s low string while dueling violinists David Harrington and John Sherba saw away at the lead melodies. It’s enthralling, sometimes immaculate stuff.

From there, the record takes a sudden turn, offering up not a Seeger classic but Zoe Mulford’s elegiac “The President Sang Amazing Grace,” which re-tells the story of the 2015 attack that killed nine congregants at Emmanuel AME Church in Charleston, S.C. – as well as President Obama’s powerful response to it. A sample of the lyrics:

If the summoning of the nation’s first black president, who served in an era of intense partisanship and rising bigotry, wasn’t enough to paint a picture of meeting discord with calm or resolve, Kronos Quartet offers as its third song an arrangement of Hindu devotional “Raghupati Raghav Raja Ram.”

The politics of the Western world, though, rage loudly throughout the LP’s 15 pitch-perfect tracks. Spanish singer Maria Arnal offers carefully cooed narration in English and Catalan to a live version of the antifascist lullaby “Jarama Valley,” which British soldiers fighting in the Spanish Civil War composed. Kronos Quartet also gives us beatific but bitter takes on politically charged “Waist Deep in the Big Muddy” (which feels, with its lead casting of a stubborn, authoritarian leader, as relevant as ever) and the playful, anti-pollution piece “Garbage.” On the latter, the quartet waltzes brilliantly around a vocal lead and occasionally belches out dissonant strains of avant-noise. The record closes with a spirited take on “Turn, Turn, Turn,” whose lyrics Seeger pulled in the 1950s from the biblical Book of Ecclesiastes, and, in case the U.S. goes to hell on/after Election Day, a wonderful “We Shall Overcome.”

At the center of the record is another unexpected gem, an original, 16-minute-long Jacob Garchik composition/suite called “Storyteller” that shifts dramatically between joy and dread amidst wonderful archival recordings of Seeger singing, speaking and playing banjo. It is, even if due to size alone, the record’s anchor and another great, unexpected playing of the quartet’s hand. It gives Seeger the chance to speak for himself while also providing incredible narrative and extra-musical arcs about societal woes, the wonders of the “volk” and the intentionality Kronos Quartet lends to the proceedings.

It would take a novel to list all of the record’s high points. While it’s easy to get swept away by spirited classical re-imaginings of “Waist Deep in the Big Muddy” or “Turn, Turn, Turn,” pieces like “If I Had a Hammer,” “Where Have All the Flowers Gone?” or “Kisses Sweeter than Wine” do just as much heavy lifting to steal the show. The record has no lulls, no sour turns of phrase, no unintended consequences. It’s a brilliant thing to behold.

And, yes, it doth protest. Long Time Passing is, in fact, THE protest record for 2020, as relevant and searing a treatise on Trump’s America as Marc Ribot’s undeniably engaging bits of agit-prop on Songs of Resistance were for the mid-term election in 2018. The fact that Kronos Quartet – birthed in ’73 and inspired by George Crumb’s nightmarish views of Vietnam – is this socio-politically dead-to-rights while offering music every bit as engaging as its takes on Reich and Riley is a testament to Seeger’s ability, even posthumously, to build bridges between cultures and camps. The record offers listeners a great deal. If Kronos Quartet’s epigrams on Seeger’s mountainous legend are the things that stick in listeners’ minds after the last song is done playing, they’ve accomplished, arguably, what they’ve set out to do. In this cultural moment, though, we need a brilliant protest record. With Long Time Passing, Kronos Quartet have given it to us on a silver platter. Regardless of what happens at the polls or in the courts or in the press, the machinations of power cannot take that away from the people.

Sadly, listeners not willing to give themselves over to the long-winded mode of presentati…