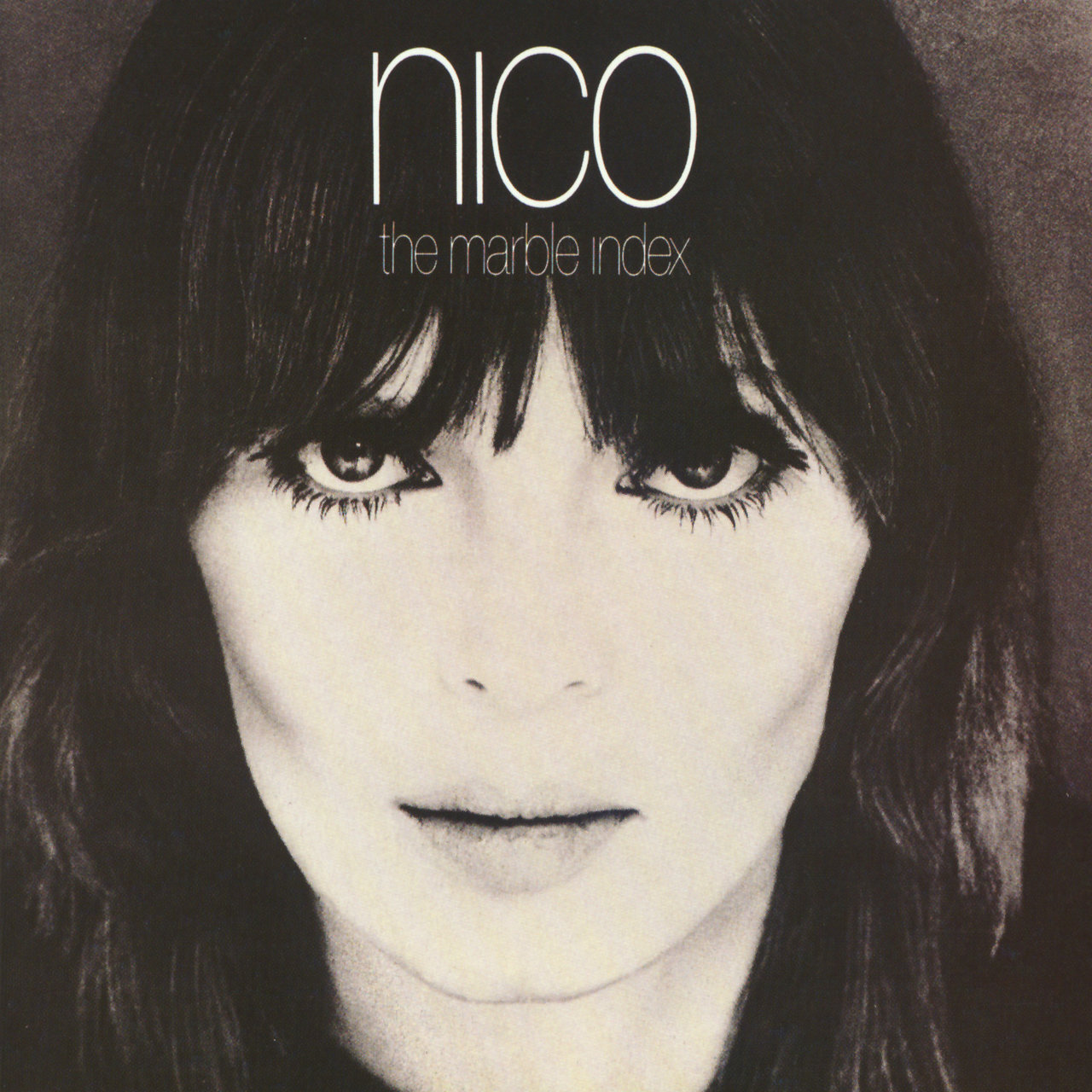 Nico’s 1967 album Chelsea Girl is something like a mirror image of the other record she featured on that year – the album-that-launched-ten-thousand-bands, The Velvet Underground & Nico. Where the Velvets record was dark and wild, Nico’s solo debut was warm and baroque. Where there are few rock albums that rival the iconic status VU&N has garnered, Chelsea Girl is a surprising, if not revolutionary, footnote to the era and scene for the curious listener. There is an important attribute these albums share, though: the complete lack of artistic agency Nico was allowed to exercise over them. Once freed from the controlling atmosphere that permeated these first efforts, Nico was able to make a trilogy of albums guided by her unique vision that cut the trail for bands like Joy Division. That trilogy begins with 1968’s The Marble Index.

It is no secret that Nico was an Andy Warhol-dictated addition to the album with The Velvet Underground. While in hindsight it’s hard to imagine that record without her haunting presence, it’s easy to see why the band was put off by Warhol’s shoe-horning. The Velvets already had more than enough egos, and Nico’s languid pre-show rituals and off-tune live performances served to compound the aesthetic frustration the band felt at having a singer on stage who performed on only a few songs and was otherwise totally stationary. Less is known about how Nico felt about the arrangement. But when it came to her supposed solo-debut, she was more forthcoming.

In an interview later in her career, Nico lamented of Chelsea Girl, “I still cannot listen to it, because everything I wanted for that record, they took it away.” What she wanted was simplicity of arrangement and production. Legendary folk and jazz producer Tom Wilson was brought in, but Nico wasn’t quite making a folk record. Though she was enlisting the talents of Velvets John Cale, Lou Reed and Sterling Morrison, this wasn’t meant to be a stealth Velvet Underground record, either, but Nico’s arrival as a solo act. And she didn’t write any of the songs. Up-and-comer Jackson Browne wrote what are now the two most recognizable tracks on the record. There’s a Dylan cover. Reed and Cale wrote some, too.

One aspect which Nico would recall later with special horror was composer Larry Fallon’s arrangements: “They added strings and – I didn’t like them, but I could live with them. But the flute! The first time I heard the album, I cried and it was all because of the flute.” Like in her modelling and acting, her music career had been dictated to her and dominated by the men that were drawn into her orbit.

Maybe to escape that influence, or maybe just looking for a change, Nico went west. There, she found Jim Morrison. Unsurprisingly, there were drugs involved. One of the best things that can be said of Jim Morrison is that he encouraged Nico – as she told the story throughout her life – to pursue and develop a songwriting practice. With her looks and her voice, she had been used, basically, as a glorified prop in what made up her “career” at that point. Dying her hair dark and dressing permanently in black, she sought to possess her own image again, and by writing songs and picking up the harmonium, Nico – in the year between Chelsea Girl and The Marble Index – took back control of her sound.

The Marble Index is just as reliant on the idea of Nico – that voice, that vision – as her previous work, but the key difference is that it expressed, for the first time, an aesthetic that was directed by the artist herself. The album leaves rock behind entirely – and while just inside the broad borders of the “folk” genre, the record sounds far more like the modern European “classical” music of the 20th century than a pop album. Nico again enlisted Cale, this time to produce – though the label brought in their own producer who ultimately gave Cale free reign – and to arrange. But it would be on her terms (no flutes). Building each song around the core components of Nico’s songwriting (she penned every track), voice and tonally uncooperative harmonium, Cale had to bend toward her uncompromising vision. Nico and Cale butted heads plenty – there’s wasn’t a cozy working relationship, but it was productive. With only one other ego to contend with, Nico was able to make the album that she wanted.

Out of the 12 tracks recorded during these sessions, eight made it onto the final album. The core duo of Nico and Cale tracked the whole thing in four days. Coming in around 30 minutes, it was apparently all the length Frazier Mohawk – the credited producer – could handle in the mixing without slipping into a depressive slump. The Marble Index is bleak. Nico’s voice is eerie and mournful. “Lawns of Dawns” with its carnival-esque lilt sounds like the films produced by the German Expressionists look – all stark shadows and impossible angles. The tremolo she coaxes from her throat on “No One Is There” adds a tremulous suspense to the already unnerving lyrics of the track. “Julius Caesar (Memento Hodie)” juxtaposes its seemingly hopeful refrain – “Mirth/ Birth/ Reverie” – with a Stravinsky-like orchestral arrangement, invoking not the natural passing of seasons, but the kind brought on by occult ritual.

The most emblematic track on The Marble Index might be “Frozen Warnings,” where all the metaphorical chill in the record’s aesthetic is made explicit. The glacial movement of the intertwined strings and harmonium build as the track reaches what passes for a climax on a record more attuned to blank expanses than epic peaks. Elsewhere, the frigid tone of the record gives a disconcerting tilt to the terrifying lullaby for Nico’s son, “Ari’s Song.” It’s an evocative track, wishing the child would run away into some otherworld of silver seas and dream-like escape. Though it sounds more like a nightmare, there is something sweet and desperate at the core of it – making it all the more uncanny. And all the more sad, too, given that the Nico of The Marble Index was in the early grips of a heroin addiction that would consume the last two decades of her life. There is love in this song, even as – and perhaps because – it pushes the son away.

Nico, like all people, was a person with individual agency dropped into circumstances – historical, cultural – outside of her control. Her responses to these circumstances were rarely ideal. Even as she was asserting a new and fruitful control over her music – having wrested it away from men who thought they knew what was good for her – she was losing control of her life. Her record label, Elektra, would drop her after The Marble Index because she had become too unreliable. She was, like many of her generation, in thrall to the same vices of the Romantics she idolized: carelessness, drugs, racism. In the early ‘70s she attacked a Black woman at the Chelsea Hotel, after which the Warhol people spirited her out of the country for a while until things cooled down. Playing a show in Berlin, she performed a Nazi-era version of the German national anthem, inciting a small riot. The heroin was certainly a contributing factor.

Cale worked with and around her addiction and the two of them would complete their trilogy of albums over the next few years. Her relationship with Philippe Garrel would have her returning to film for the first time since working for Warhol, but the relationship only deepened her addiction. By the end of the decade, she was an obscurity, if not a relic. But a strange thing happened: The Marble Index, which had been forgotten almost immediately upon release by most of the world, was being picked out as a touchstone – as, in fact, an originator – of the Goth subculture exemplified at the time by Joy Division.

Nico hadn’t set out to open the door onto an entirely new genre of music when she made The Marble Index, but nonetheless she had. And it wasn’t just the sound, but the lyrics and Nico’s look that had somehow seeped out of the obscure space in which she had carved her own path and into the wider world. Peter Murphy of Bauhaus said that “Nico recorded the first truly Gothic album… Nico was Gothic, but she was Mary Shelley to everyone else’s Hammer Horror. They both did Frankenstein, but Nico’s was real.”

In the wake of this, she made a rock-influenced record without Cale and then reunited with him one more time for her final album. There’s no need to cloud this space with the tragic accident that led to her death, but it’s worth noting that by 1988 when she died, she had begun getting clean from her addiction. On “Evening of Light,” the final track on The Marble Index, Nico sings “A true story wants to be mine.” It took a long time, but in the end she did get a story that was hers, the truth of which had sprouted first out of the frozen tundra of The Marble Index.

Given the hiatus that would follow this record – and, now, Bowie’s death – it’s hard not t…