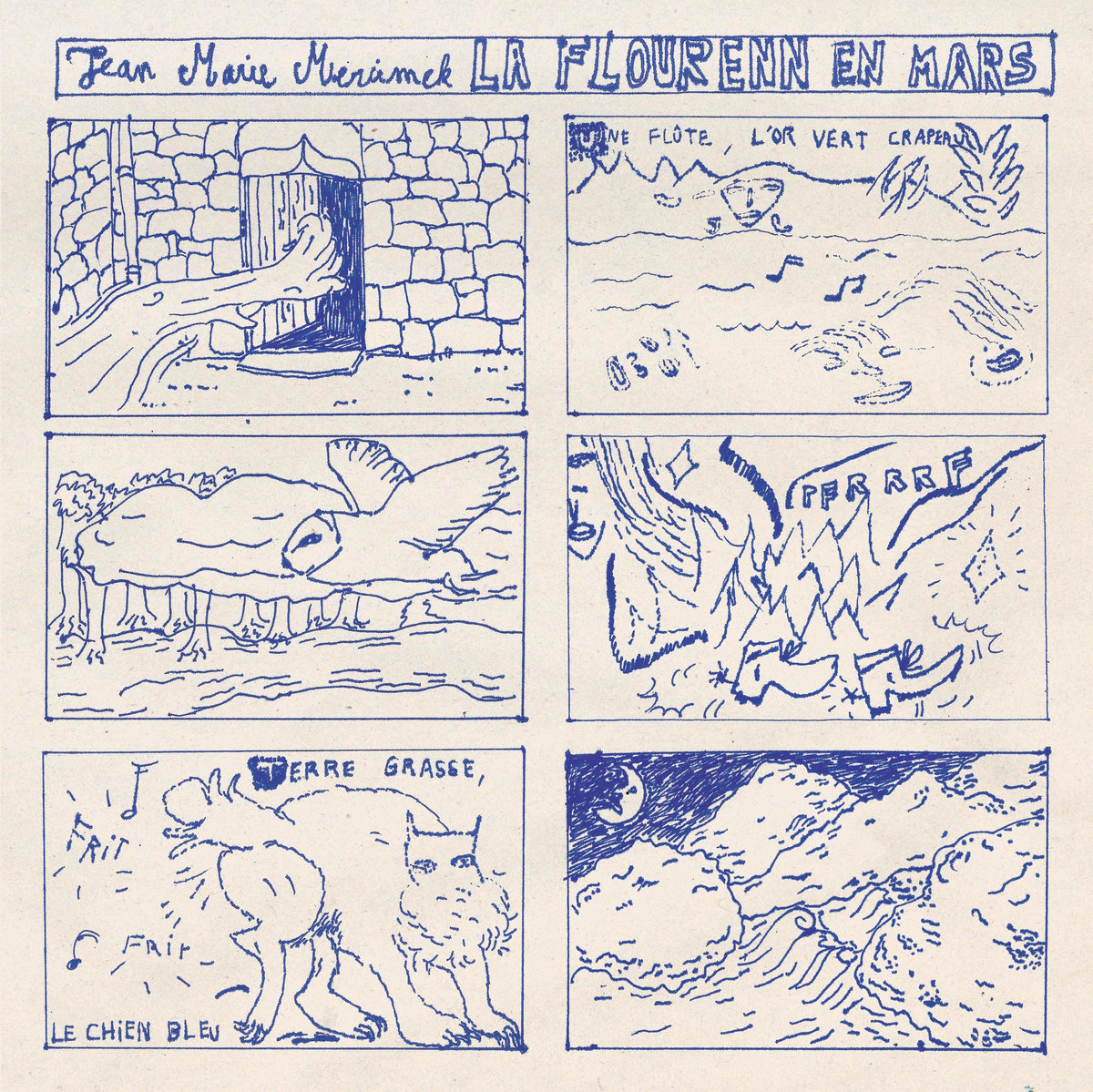 Marseillaise underground artists Ronan Riou & Marion Molle take the name of their collaborative project not from the French for, approximately, “Thanks dude,” as Tone Glow’s Joshua Minsoo Kim recently surmised in an extensive interview with the duo, but from French artist Jean-Marie Massou—and the name they gave to their kombucha. The fermented, yeasty tea is an apt metaphor for a lo-fi collage that’s at once experimental and comfortably accessible, with enchanting melodies percolating out of found textures. The cover art of their album La Flourenn en Mars, a comic book sequence they created themselves, suggests a fairy tale populated by owls and wolves and woodland travelers, and the music plays like a dream.

The vinyl album is divided into Face A and Face B, each running for about 20 minutes, the length of a comfortably-pressed LP side, but the digital edition breaks these sides into individual tracks. Thus, “Prélude” begins with a low, hissy drone before a series of cues suggest a sense of place: shuffling footsteps, the crunch of gravel, the squeaking hinge of an opening door, the sound of flowing water. But this establishing shot, as it were, doesn’t orient the listener for long; synth swoons emerge as the ambient sounds of water and the outdoors appear and disappear, and then, on “Nocturne 1,” a thudding pulse and beat kicks in that accompanies Molle on a spoken-word sequence in French. The text is taken from French writer Jean Giono’s 1934 novel The Song of the World, which was inspired by Walt Whitman’s Leaves of Grass, and despite the electronic instrumentation, the duo pulls off a playfully pastoral mood. “Nocturne 2” follows with a heavily-distorted lo-fi drone, synth melodies playing out like a distant memory before a bunch of tape hiss carries in a catchy synth-pop instrumental.

This is abstract stuff, but tracks follow what appears to be a logical sequence—a dream logic, that is. The duo summons up a carnival atmosphere with the fragment “Piano Bass Sncf,” its broken calliope sounds segueing into the somewhat more conventional “Tendre Jusqu’au Matin” (“Tender Until Morning”), a nearly seven-minute instrumental dominated by a thudding drum beat peppered with synth notes that morph from toy-like timbres to glassier sounds; if one takes the cover art as a guide to the narrative, this evokes a stroll through dark woods that turns from peaceful to sinister. The arrangement shifts from synth-pop settings to melancholy strings that suggest a wounded woodland creature.

Riou and Molle met during a film festival in Amsterdam, and their music has a cinematic quality, conjuring up images that are at once vivid and mysterious. Molle studied classical violin as a child, with Riou picking up music in his teen years, so their formative influences hit them at different stages of development, but their adult vision retains a childlike wonder. La Flourenn en Mars is their second album as Jean-Marie Mercimek, after the 2017 cassette release Le Voyage avec Jean-Marie, and with these two audio storybooks behind them, one looks forward to their next fabulistic session.