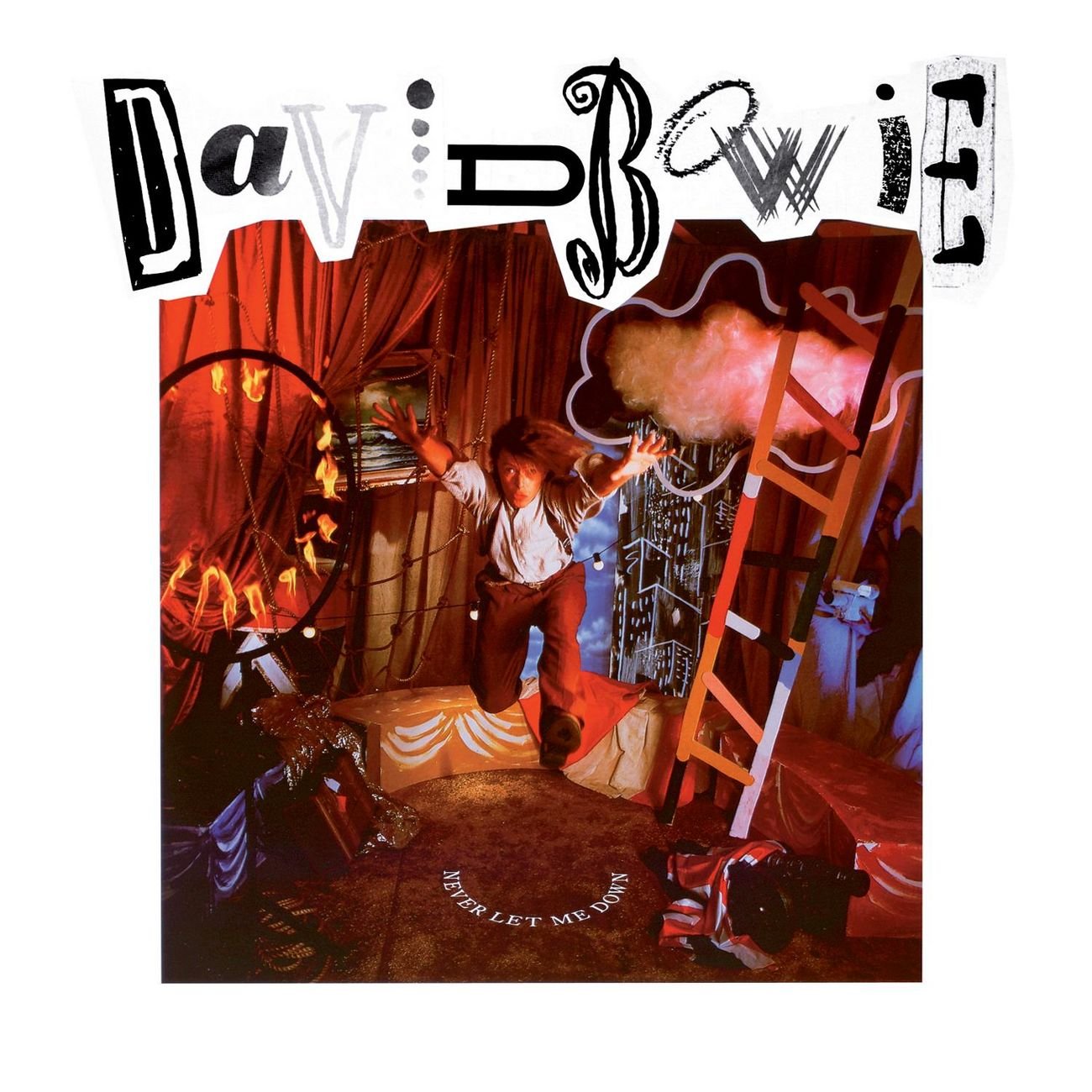 The cover of Never Let Me Down (1987) speaks volumes. A zany mix of typefaces spells out Bowie’s name; there’s a ring of fire and a cartoon ladder, a scribbled city and an outlined cotton-wool cloud. There’s a red curtain drawn back to reveal a sea; a rope ladder; a shirtless black man with a visible wing (presumably one of the angels from the “Day-In Day-Out” video) hiding behind a curtain with a video camera in his hand. In the middle is what looks like a circus stage, out of which leaps Bowie, his hair long and blown to one side, ruddy trousers matching the many shades of scarlet in the scene. It’s a hot mess, in short, and Bowie looks like nothing so much as a trapped circus animal, desperate to escape.

That sums up Never Let Me Down — one of Bowie’s best-selling albums despite being a critical flop, the predecessor to Tin Machine — nicely. Bowie himself told Interview magazine later, “My nadir was Never Let Me Down. It was such an awful album.”

But when he sat down for an interview with Rolling Stone in early 1987, shortly after his 40th birthday, Bowie was upbeat. He was getting ready for a world tour that would be “something special.” The title song was about his longtime stalwart PA, Coco Schwab. “Day-In Day-Out” was a polemic against homelessness, an issue he cared passionately about. He was excited to cover Iggy Pop’s “Bang Bang,” hoping his version would bring more attention to the tune.

He released an extensive electronic press kit for the upcoming tour, which he said would be “very theatrical… lions and tigers and that sort of thing.” On the press kit recordings he talked of going back into the studio to record yet more songs that hadn’t fit on the album. “When I finished the album, I really liked ‘Never Let Me Down’ — I thought that was a really great song,” he asserted, while acknowledging, “I inevitably like the thing that I’m doing at the moment.”

Bowie had brought old friends in for Never Let Me Down. Carlos Alomar was back on rhythm guitar while childhood friend Peter Frampton took lead. The gifted Erdal Kızılçay handled multiple instruments. Mickey Rourke took a “rapping” part in “Shining Star (Makin’ My Love),” and Carmine Rojas returned on bass. The Borneo Horns were back from Tonight.

The pieces were all in place, the band was tight, but something was wrong. Critics who wanted to be forgiving blamed the production, but that was far from the only problem. Many of the tracks are lengthy for pop, and employ repetitive motifs which drag the songs down. (In fact, the tracks were so long that many of them had to be cut for the vinyl version of the album.) Rumors of cocaine use dogged Bowie throughout this period, and he affirmed later that he was back to using while making Never Let Me Down. But Bowie had made superb albums, notably Low and “Heroes”, under the influence. Whatever the cause, there’s a kitchen sink quality to the album — too many musical styles and too many musicians on every song. Bowie was so dissatisfied with “Too Dizzy,” a track he’d penned with Kızılçay, that he cut it from subsequent releases. The spoken-word first half of “Glass Spider” (the namesake of the tour that followed) was nonsensical, presented by Bowie in an almost comically weighty tone.

It wasn’t all irredeemable, but even the better tunes were a mixed bag. Bowie, never at his best when attempting an explicit social critique, clogs “Shining Star (Makin’ My Love)” with stereotypical images of the world he seeks to describe: “Tessie turns tricks with a soul like ice ‘cause love left holes and four small kids.” Still, the song sports catchy percussion by “Crusher” Bennett, and a heart-catching vocal on the pre-chorus: “Life is like a broken arrow/ Memory a swinging door/ I could be your great misfortune/ I could make you happy every day of your life.” It’s a toe-tapper and, despite the theme, a joyous, spirit-lifting tune.

“Zeroes” is a conundrum. It’s a pastiche piece, loaded with ‘60s musical and lyrical references — most notably to the Beatles, with Frampton even playing George Harrison-style sitar riffs, swiped chord sequences and a phrase clipped from “Fool on the Hill.” There are additional thefts from and references to Bob Dylan and Prince, among others (Bowie, in Rolling Stone, of Prince: “he’s probably the most, eclectic artist I’ve seen since me… I think he’s a great stealer”). Like much of Never Let Me Down, the song sports big sound and lacks dynamic range. The electronic fake applause is irritating to the ears, and Frampton’s solos seem random and out of place ¬— yet the harmonies on the chorus are celebratory and invigorating. Then there’s that title. “Tonight the Zeroes were singing for you”: is that a positive, or a negative? The band’s huge, but they’re “Zeroes.” The irony of this, coming from Bowie, was likely lost. Bowie saw the song as “the ultimate happy-go-lucky rock tune” and wanted it to be one of the album’s singles; the label disagreed, and the song received little airplay. (A posthumous 2018 reengineering of the album would make “Zeroes” its sole single release.)

Long an admirer as well as a friend of Iggy Pop, Bowie had recorded a cover of his “Bang Bang” in hopes that his newfound stardom would help boost Pop’s own fortunes. Despite a guitar solo by Sid McGinnis and a vocal chorus that hearkened back to Bowie’s earlier “blue-eyed soul” records, the recording lacked the passion and darkness of the original, which had itself charted at #35 and probably didn’t need Bowie’s help, however well-intentioned.

Over the years, Bowie repeatedly declared “Time Will Crawl” his favorite track from Never Let Me Down and one of his favorites from his entire career. The song holds its own among his best, but its inclusion on such a reviled album has made it long overlooked despite being one of the album’s original singles, with respectable sales and chart performance. Reportedly inspired by the Chernobyl nuclear accident (“I saw a black black stream/ Full of white-eyed fish/ And a drowning man/ With no eyes at all”), the lyrics are extraordinary, some of Bowie’s most poetic. Per Bowie, the song explores “the idea that somebody in one’s own community could turn out to be the man who’s responsible for blowing up the world.” Starting with a punch of drums and Erdal Kızılçay’s haunting trumpet, the track leverages repetition more effectively than elsewhere on the album, the downward motif of the verse lines serving to mesmerize the listener, in line with the theme: “We never bothered to scream/ When your mask went on/ We only smelled the gas /As we lay down to sleep.” McGinnis’ guitar solo here is perfectly timed, and segues seamlessly into Kızılçay’s bright horn.

Let’s Dance simultaneously made Bowie a rich man and complicated his artistic options. …