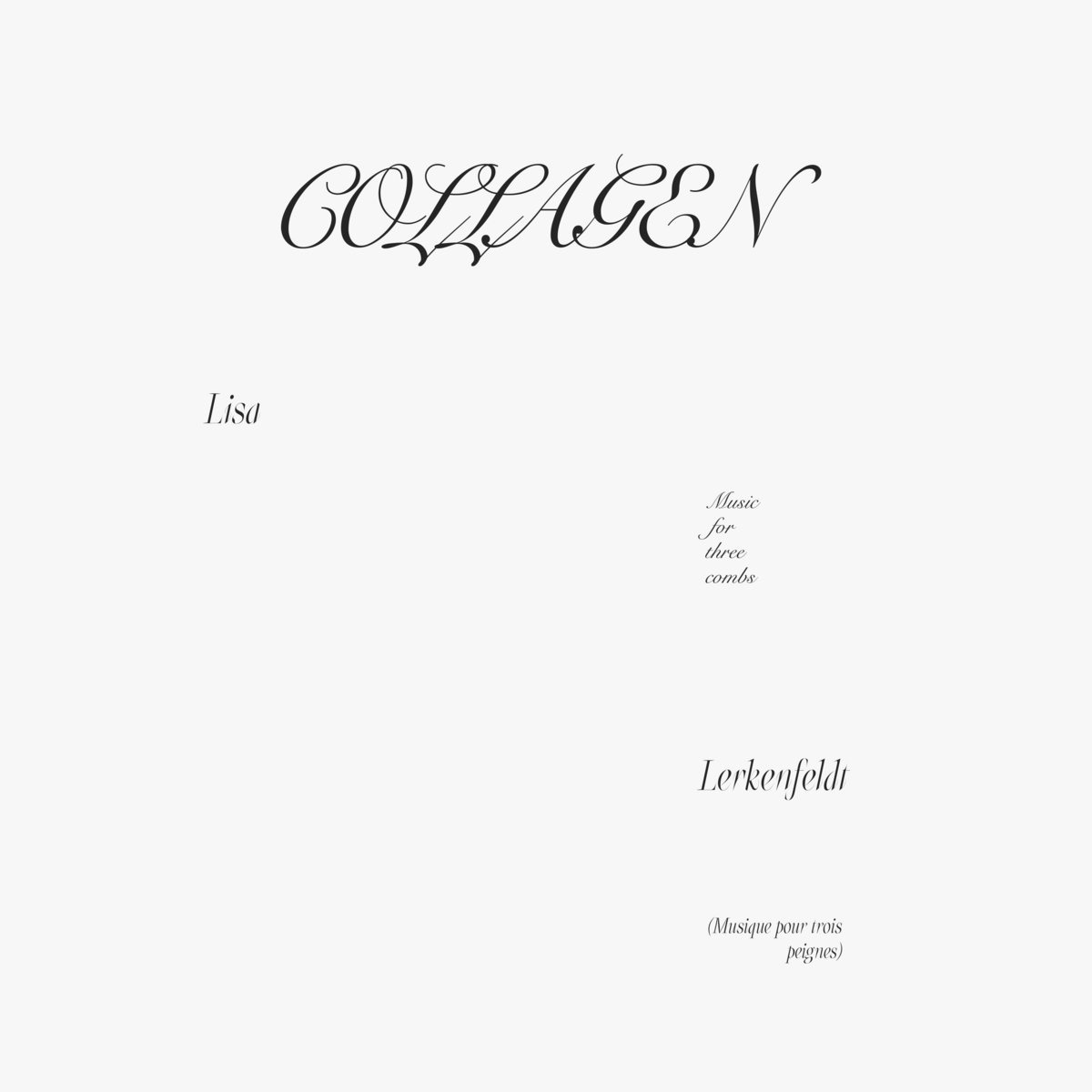 The works associated with Lisa Lerkenfeldt’s Collagen, effectively her first full-length release, are hard to simply pin down. This is true both in terms of the album’s six tracks and to the difficulty in ascertaining exactly how they fit into the artist’s wider practice. For the album, on the one hand, seems to contain recorded material that’s part of an ongoing gallery show titled 14 Gestures currently on view in Naarm/Melbourne, while an accompanying black and white video on YouTube shows what is presumably the artist’s hand silently manipulating a series of hair combs across a plain white expanse. The combs, later to be dipped in black ink or paint, leave traces of gesture, force, pressure and speed and it’s these traces which are exhibited as the 14 Gestures, and which function as notated scores for the works collected in Collagen.

Quite how the scores are related to the sounds that wash through Collagen is never explained, which may very well be the point. All graphical notation is arbitrary and, if anything, what Lerkenfeldt offers with the 14 Gestures exhibition is a more concrete way of considering how to represent her art. Her complex practice sits fluidly between musique concrète and manipulated field recordings on the one hand and delicately wrought soundscapes on the other. Thus the recordings of Collagen invite interpretation and the printed gestures that accompany the vinyl and supplement the recordings offer possible paths for understanding each track’s generation.

Common to each of the album’s tracks is a base tone – a drone perhaps, but with a kind of granularity that at once suggests electromagnetic traces and water on sand. Lerkenfeldt has restricted the compositional palette to piano, strings, wooden combs and feedback, but while the originating sounds might be limited, the results never feels constrained.

The drone that holds the centre of “In Her Hair” shifts slowly like a cross between a slowed strings sample and a synth pad, moving organically across a small number of pitches while other percussive sounds infrequently flare and are silenced. In comparison, the drone that serves as the acoustic platform for “Collagen” is more abrasive, slowly being smothered with the static that gathers in front of it as it changes pitch and attempts a short musical phrase before, with a couple of shifts in volume, settles back into stability. From there it pulses slowly, rising and falling in volume while the static develops its own slow pulse to compliment. The title track contains only those two compositional elements – drone and static – yet it is never dull, sounding all the while like a newly discovered chemical process proceeding mysteriously without human intervention.

“Gates of Desire” does suggest a human presence with its simple piano motifs that float, Harold Budd-like, over insectile scratchings and the sounds of delicate machinery gently abrading in the background. At just under three minutes, it’s the album’s shortest track and its sweetest. The hand of the composer is also audible in closer “Champagne Smoke,” which offers sustained cello or violin notes that rise and fall through a veil of glitch and noise. As with many of the album’s tracks, there’s a wrestling between these sound sources, each playing with timbre and volume as a way of gaining temporary control of the foreground. As the track progresses, the strings muster enough strength to saw impatiently at the static before it ceases entirely, leaving a hollowness that is further highlighted by the gradual return of other granular sounds which breathe loudly at the song’s close, and are gone.

Compared to Lerkenfeldt’s earlier work, her latest album is a much quieter exploration of sonic material than her collaboration with Grace Anderson as Perfume, where granular drones and machine noises are mixed with pulsing synths. This is also in contrast to the post-industrial ambience of 2017’s Glass Braid. Collagen offers a wider sonic field, suggesting broader landscapes than the collapsed buildings and wrecked machinery of her earlier works. And while the tracks seem to largely occur without the muddying presence of humanity, the delicacy of the compositions and the care with which they’re pieced together keeps the hand of the artist in the foreground, much as in the video “Music for Three Combs,” gesturing mysteriously and suggesting that there is more at work than meets the ear.

Anatomy of a Tracklist: Stan Ridgway: The Big Heat