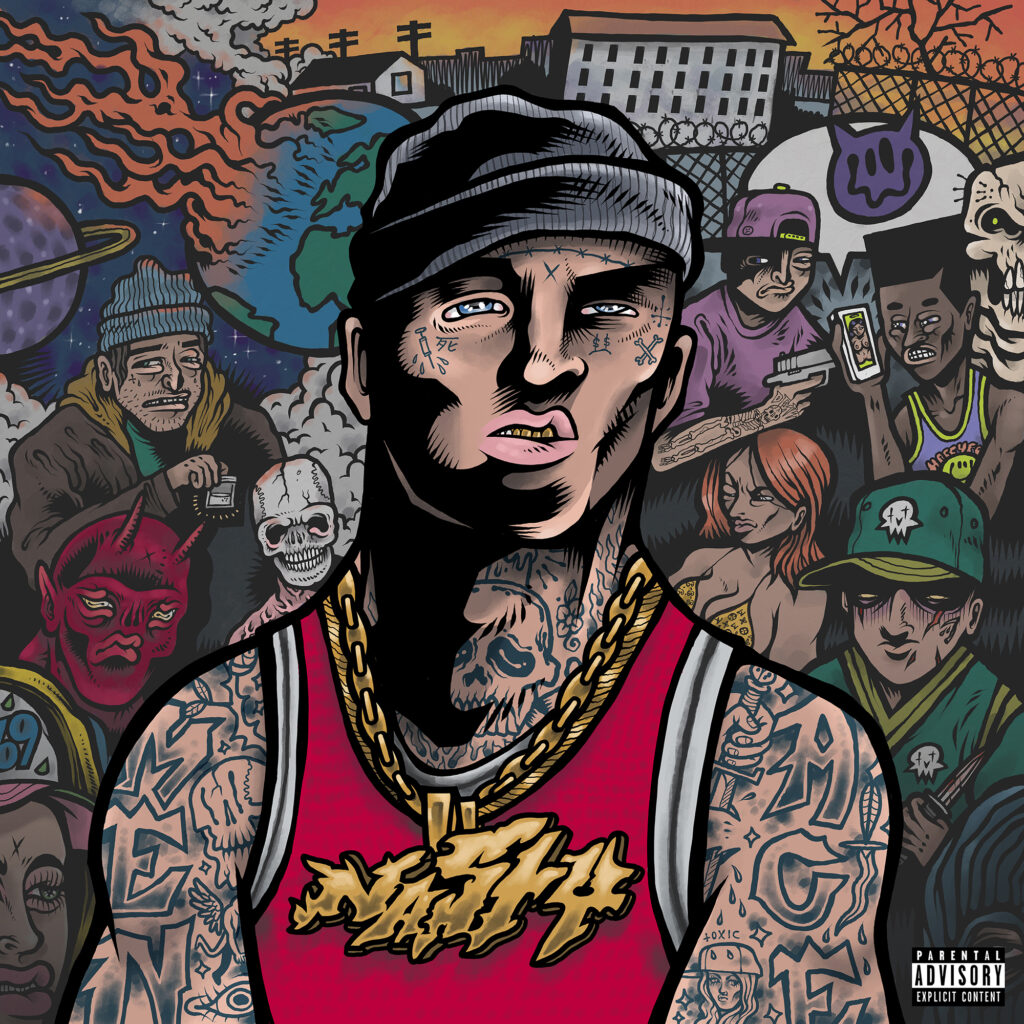 Beatdown hardcore technically traces back to the 2001 Bulldoze album The Final Beatdown, but it took almost two decades for the larger heavy music scene to catch on. Before the current era of slam riffs and hip-hop, everyone was quick to point and laugh at European bands like Nasty. In fact, the current UK beatdown craze owes its existence to this Belgiun quartet slugging out from the underground to massive festivals and signing to Century Media Records. In this sense, Nasty was right to stick with its ultra-aggro fight music until everyone else got on board – and now the band’s in a prime position to keep doing what it’s good at. After 16 years and seven albums, Menace finds Nasty still having fun with making music for punch-drunk cavemen.

Try to listen to “Ultimate” without wanting to hurricane kick the nearest person. A lot of people deride hardcore music for writing filler before the breakdown, but Nasty literally only writes breakdowns and slower breakdowns. If that sounds ridiculous, these guys know and they don’t care. The memetic greenscreen effects in the music video for “666AM” clarify just how much this band cares about the tastemaker’s opinion. This works in the band’s favor, as it delivers austere callouts and life-ending riffs. Nasty doesn’t work in djenty syncopation or interlocked double bass. Guitarist Paddy and bassist Berri favor dirty, primitive slam riffs.

To clarify, that means palm-muted chromatic power chords played in simple quarter note rhythms. This effectively nullifies the need for keys signatures, along with traditional song structures in general. “Be Careful” features the only actual chorus, and the closing instrumental “Ballad of Bullets” provides the only harmonized riffs and followable chord progressions. Menace doesn’t apologize for being a 30-minute excuse to punch random mosh pitters in the face.

As the 48-second attack of “Bulletrain” displays, Nasty has no problem with hitting hard and getting out quick. This leaves no room for the band’s decidedly basic approach to wear out its welcome. “Tricky Plays” and “You Will Know My Name” cycle through several tempos and riff changes, only to inevitably circle back to a satisfying fight riff. Yes, those beatdowns are the real draw, but the chaotic nature of Nash’s drumming gives the arrangements unpredictability to match their inevitable conclusions.

In a style that’s only getting more saturated, Matthias “Odysseus” Tarnath still has one of beatdown hardcore’s most distinctive voices. Maybe it’s his accent, but his barks and snarls feature such a distinct, violent hatred. This elevates the payback-to-backstabber trope of “Betrayer” and the two-line motif of “Inhale/Exhale,” in that his mosh calls can’t be ignored. Cuts like “Blood Crop” find him sounding like a rabid animal, giving the slick, airtight instrumentation a more visceral bight. His lyricism mostly amounts to tough-talking diatribe in its most primal form, but he was one of the first vocalists to pull of a rapped vocal cadence without sounding corny.

Other than the minimalist guitar loop before the bomb blast hits on “Addicted,” this album’s production value mostly amounts to 808 bass drops and siren samples. Menace does very little to break the mold, but, frankly, deep cuts like “Table of Kings” and “The End of the World” are too satisfying to mess with. Each song accomplishes Nasty’s ongoing goal of turning crowd killers into berzerkers. This band has held it down for this niche in their country in the past decade and a half, so there’s little sense in stopping now. Menace might not be the most complicated record, but it’s good violent fun. Those who want a solid summation of what modern beatdown is all about, look no further.

USBM: A Revolution of Identity in American Black Metal: by Daniel Lake

Chock-full of archival photographs and interesting interviews, USBM is a necessary tome of…