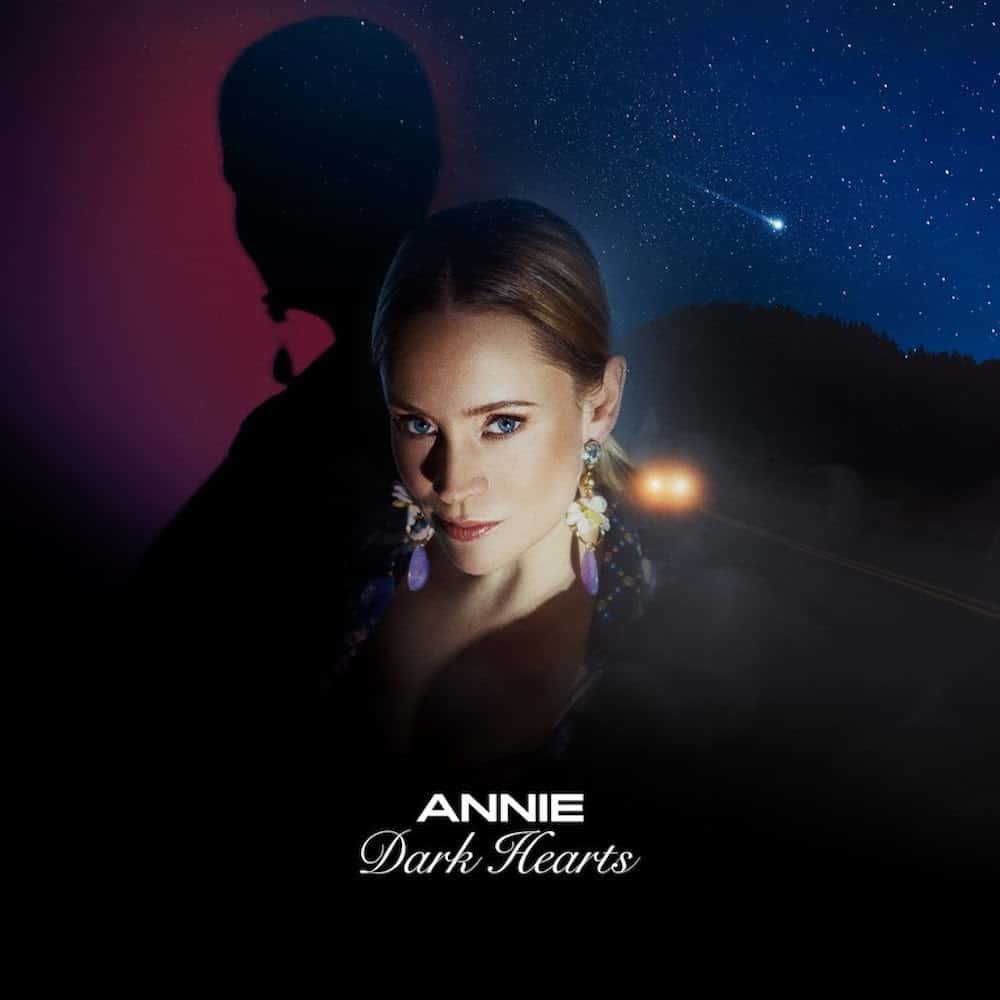 Norwegian singer-songwriter-producer Annie Strand has always navigated uncharted territory with confidence. Listen closely to “Heartbeat,” and you can hear a precursor to The Drop, who would revolutionize pop a few years later. 2015’s The Endless Vacation EP hinted at the ways in which particularly glitchy, “hyper” instrumentals would likewise grow in popularity. With Annie’s third studio album, Dark Hearts, she once again engages in new paths, with much less excitement but no less fortitude.

Dark Hearts’ artwork perfectly encapsulates its sound. Set against a midnight sky, a single meteor in the background, Annie appears exactly as she sounds: singing into a cavernous, echoing space, no end in sight. The red and blue tints recall the opposing chambers of the heart. Whereas an unknown expanse might appear daunting to most, Annie drifts into the darkness with acceptance: “Into the great unknown,” sung in her trademark soprano, is like a nightlight in a dark room.

New territories bring new discoveries, such as Annie’s now toned down sound. The haste and wonk are replaced instead with nostalgia and relaxation, with middling results. “The Streets Where I Belong” and “Forever ’92,” particularly the latter’s saxophone, provide due homage to now ubiquitous ‘80s synth. In addition to being faithful interpretations, these tracks, as well as late-game gem “The Bomb,” provide a bit of kick to an otherwise languid album, where the vast, reverberating soundscapes are much too heavy to carry on at a higher tempo.

Annie never forces these massive scenes forward, and instead allows herself to sink into them: “I’ll let go of the wheel/ And take hold of my heart” pretty much gives that away. After years of Berghain antics and exhilaration, Dark Hearts comes as a sojourn, a chance to relax and reflect. This might surprise and disappoint longtime listeners; the album lacks a lot of the experimentation of efforts from just five years ago, and no song quite stands out as a single.

And yet, that seems like the point, and it is on that point that Dark Hearts does succeed. This is not an album for clubbing but contemplation. As the party (read: world) ends, Annie takes control in what ways she can, reveling in the warmth of memories while gazing towards uncertain futures. “Into the sea with me,” she croons, a siren’s invitation on “Mermaid Dreams,” dreams which seem more likely as the seas continue to rise. The way the album just seems to exist in massive, hollow spaces only makes her pleas all the more inviting, or perhaps engulfing. A title like “Corridors of Time” understands that such confines aren’t to be escaped but accepted in order to achieve tranquility, and possibly clarity as a result. After all, the end of the world will probably arrive, as Annie predicts, on an ordinary day. Best to brace yourself by appreciating all you hold dear, and hoping, even if it’s futile, for the hope of something better.