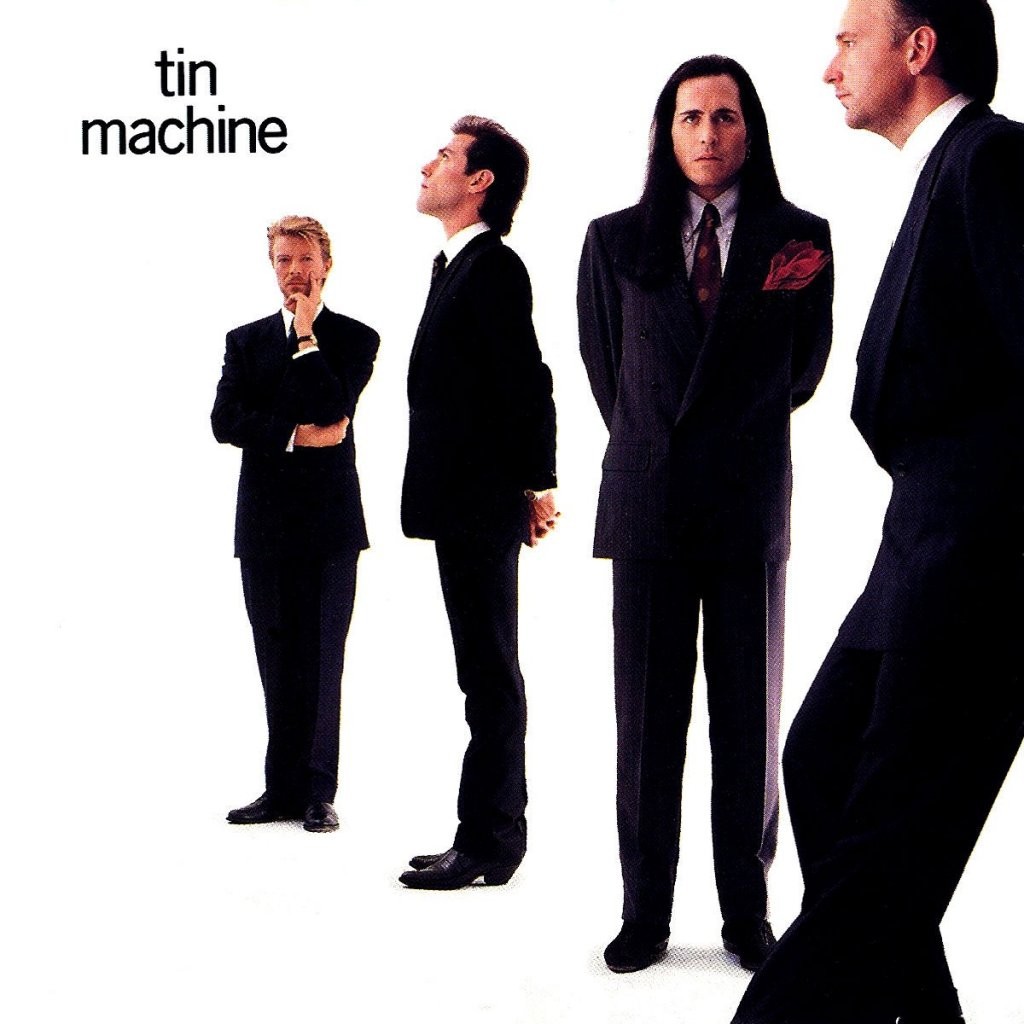 Over the course of his long career, the thing that tied every one of David Bowie’s projects together was the power of his persona. True, that persona evolved frequently between albums, but whatever guise he put on, he remained an utterly captivating pop star, the sort of musician whose work demanded attention. Yet, to hear Bowie tell it, the persona started being guided by commercial demands rather than artistic interests, and the result was the twin disappointments of Tonight and Never Let Me Down and the disastrous Glass Spider tour. By 1988, David Bowie’s persona had become so unfulfilling for the man behind it that the last thing he wanted to do was make another David Bowie album. So, he disappeared.

Over the course of its short lifespan, Bowie tried to insist that Tin Machine was meant to be a proper band, something completely separate from his body of work up to that point. This may have been wishful thinking on Bowie’s part – it’s hard to look at Tin Machine as an anonymous band when the only member known to a wide audience is David fucking Bowie – but Tin Machine certainly existed far away from what Bowie had become internationally famous for at the time. Gone was the plastic soul and booming, gated drum sounds; in its place were crunchy guitars and leaden rhythms that had little, if any, connection to R&B or the pop charts. Tin Machine is, first and foremost, a rock album. It’s kind of a weird rock album, one that doesn’t really fit in with any style of hard rock that was popular at the time, but it’s a rock album nonetheless.

And make no mistake, Tin Machine does rock. Split relatively between leaden, midtempo numbers and more upbeat songs, the album bears a lot of the markings of an ‘80s studio album. Bowie’s and Reeves Gabrels’ guitars draw the ears with their layers of distortion, and Gabrels’ lead work walks an interesting line between atmospheric soundscapes and straightforward hard rock solos. At times, the band’s inspirations are obvious: opener “Heaven’s In Here” waltzes in with a barroom blues stomp that wouldn’t be out of place among the glut of classic rockers experiencing renaissances in the late ‘80s. Elsewhere, though, Tin Machine gets…weird. The guitars overpower most of the songs, creating a swirl of distortion that has invited comparisons to Sonic Youth. Yet, when you actually sit down and listen to the album, those comparisons seem off-base. This isn’t noise-rock or some arch experiment. From the way that these songs are written, it’s clear that Tin Machine is supposed to be a rock album. It’s just a deeply strange rock album.

If what Bowie and company were going for was atmosphere, then Tin Machine is largely a success. However, that doesn’t translate into good songwriting, and it’s here where the album comes up largely short. Occasionally, the band stumble upon a melody that can carry their onslaught of sound, such as on “Prisoner of Love” and “I Can’t Read.” There’s even something akin to a classic-sounding Bowie song here in the form of the too-short vignette “Bus Stop.” More often than not, though, the songs float by as rivers of overproduced guitar and drums begin to numb you after a few hours of overexposure. Even the lone attempt to write a meaningful song here – the anti-fascist “Under the God” – falls flat simply because the melody isn’t strong enough to leave a lasting impact. Thus, for all of its quirks, Tin Machine ends up feeling decidedly devoid of real substance in a way that isn’t too dissimilar to the emptiness of Bowie’s mid-80s nadir.

Even so, I’d rather listen to Tin Machine than Never Let Me Down; a stumbling attempt at artistic growth is far preferable to a holding pattern dictated by sales numbers. Indeed, while joining a band and plugging his distortion pedal back in may not have been David Bowie’s most artistically successful evolution, it may have been his most necessary one. Staring at the precipice of becoming a caricature of himself, Bowie instead chose to throw his audience for a loop once more. It’s arguable whether Tin Machine’s music or production has stood the test of time, but its unique place in Bowie’s catalog is impossible to argue with.

This is a new band now, distinct from the one who made Rise Above and Bitte Orca, and they…