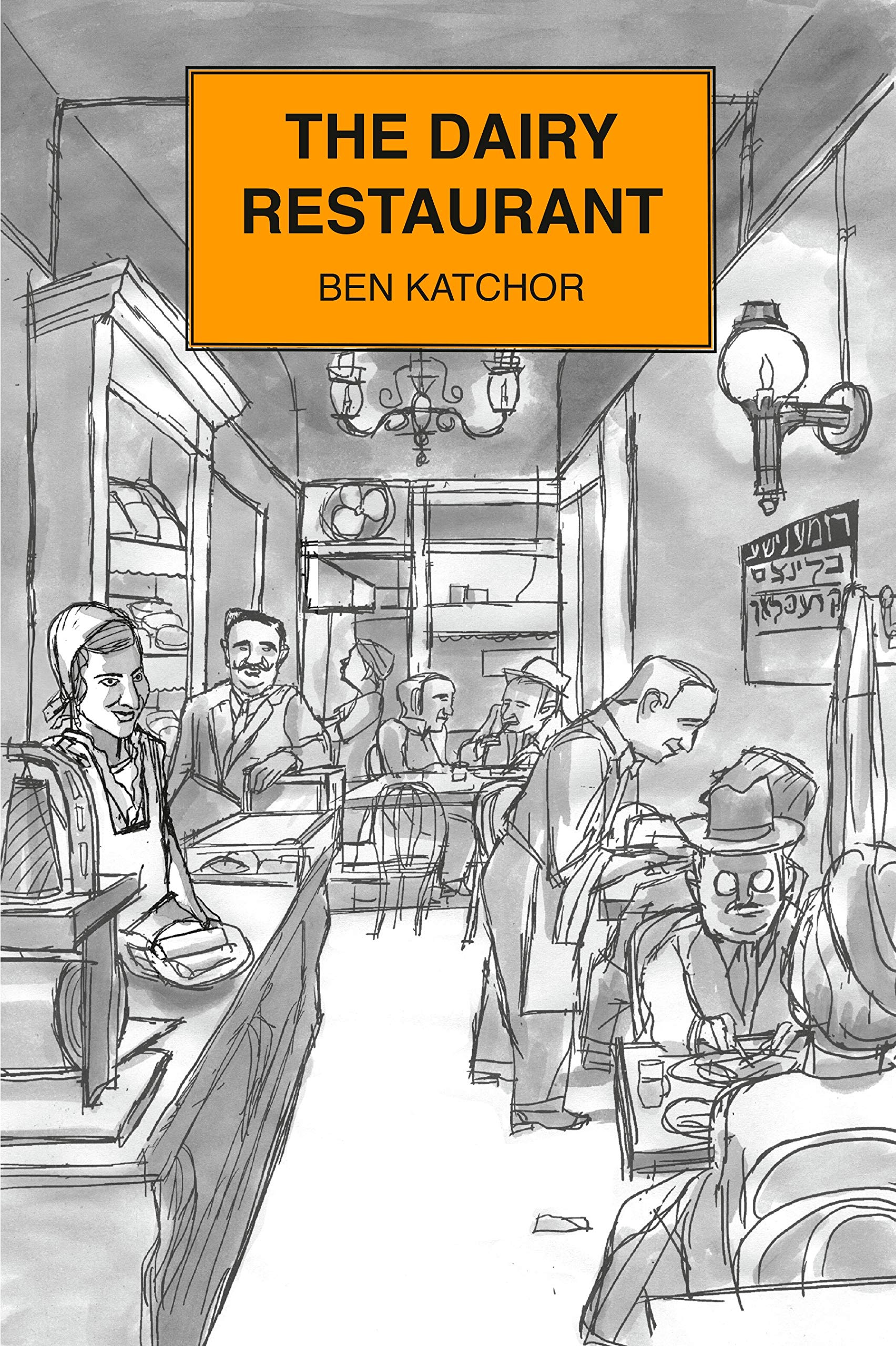 It sounds like the beginning of a joke: where did it all start? “Well, in the beginning, God created man…” That’s the exhaustive and droll tone that illustrator Ben Katchor achieves with his nearly 500-page book The Dairy Restaurant. Dense with historical information and illustrated with Katchor’s signature line-and-ink wash drawings, the book may tell you far more than you thought you wanted to know about its subject. But the text and artwork complement each other for a tasty and heavy meal.

Katchor’s lines feel casual, his washes creating a soft depth. If Katchor’s alt-weekly comic strip Julius Knipl, Real Estate Photographer evoked a lost New York, the unassuming visual observations here create a gentle tension between the sometimes dry historical content and the playful yet off-kilter images. This perfectly suits work that can come off like an anxiety dream that pops up in the middle of a history course.

The dairy restaurant, a Jewish institution that has all but disappeared from Manhattan, is the subject of this course, and Katchor indeed traces it back to the beginning—all the way back to the Garden of Eden, whose forbidden fruit may well have been the first example of the strict dietary laws that gave rise to his subject. The anxiety dream that emerges visually suits the textual content; how can one hope to keep track of the complicated rules of kosher food prep? Katchor takes the example of drinking coffee before Shabbos morning, which even absent detailed explanations of the restrictions that make such a concept so difficult, reads like an obsessive character mulling over daily obstacles.

It feels Kafkaesque at times, and inevitably, Katchor namechecks the legendarily angsty author, who found it, “the perfect social gathering,” for reasons which include the fact that, “you can leave at any time without offending the host.” (One is surprised to learn that Kafka was so casual regarding the social graces.)

Thoroughly researched and thought out, Katchor peppers The Dairy Restaurant with asides that would provide entire chapters in another survey. For instance, in one brief passage, he notes the industrial advances that helped make dining out as we know it today possible: the introduction of continuous-sheet paper in 1798 enabled food packaging and newspapers (and tavern advertisements), the development of gaslight lamps in London in 1812 gave birth to nightlife (and, perhaps, new opportunities for violent crime) and sheet glass in 1832 opened up new avenues of food display, and so forth. These all came to a head for what Katchor considers a pivotal juncture where the invention of the restaurant crossed the path of Jewish dietary rules—it happened on the Right Bank of Paris in 1766. At that time, maisons de santé served “mild white foods,” which “were the foods of women, children and highly strung intellectuals,” a class distinction that separated them from “the dark-brown and blood-red foodstuffs eaten by laborers and warriors” (cf., perhaps, “elevated horror”).

Katchor waxes on for hundreds of pages offering such fascinating details as Marie Antoinette’s garden dairy, whose interior was decorated with casts of her breasts (only the exterior is illustrated); or the Odessa café and pasty shop “where Chekhov ate ice cream.” For the book’s long final act, Katchor provides a guide to mostly long-gone dairy restaurants, first in various New York neighborhoods, through the outer boroughs and in cities across the United States—even one in San Juan, Puerto Rico.

What led Katchor to this obsession? Near the end of The Dairy Restaurant, he recounts his childhood: dying Jewish restaurants that followed stringent regulations, his mother’s unusual milk-based spaghetti sauce, spaghetti with a tomato and milk-based sauce, his sense that ‘40s comic books seemed more interesting than what was on the newsstands when he was a child in the ‘60s. What if they people really did live better in the past?

Yet the author doesn’t wallow in nostalgia, and sometimes has a wry sense of humor about it. Speaking of one dairy restraint meal, he writes, “The bitter flavor reminded me of the suffering of my ancestors.” It’s a distinct cultural humor. Recounting a passage from author Sholem Aleichem’s 1903 monologue, “Milkhigs,” Katchor writes that, “Milkhiks…are more affordable than fleyshiks, and when one can’t afford even the milkhiker ingredients, one can at least enjoy standing around a fish market talking about them.” Thus food tells a story, going back to ancient times. Even those unfamiliar with the terminology can enjoy the way that passage scans (this may be a clue as to how New Yorker writer Joseph Mitchell got such great material out of the Fulton Fish Market). “Have we overlooked the intimate and direct connection between language, speech and food?” Katchor asks. He hasn’t—and that’s what makes him so endearing.