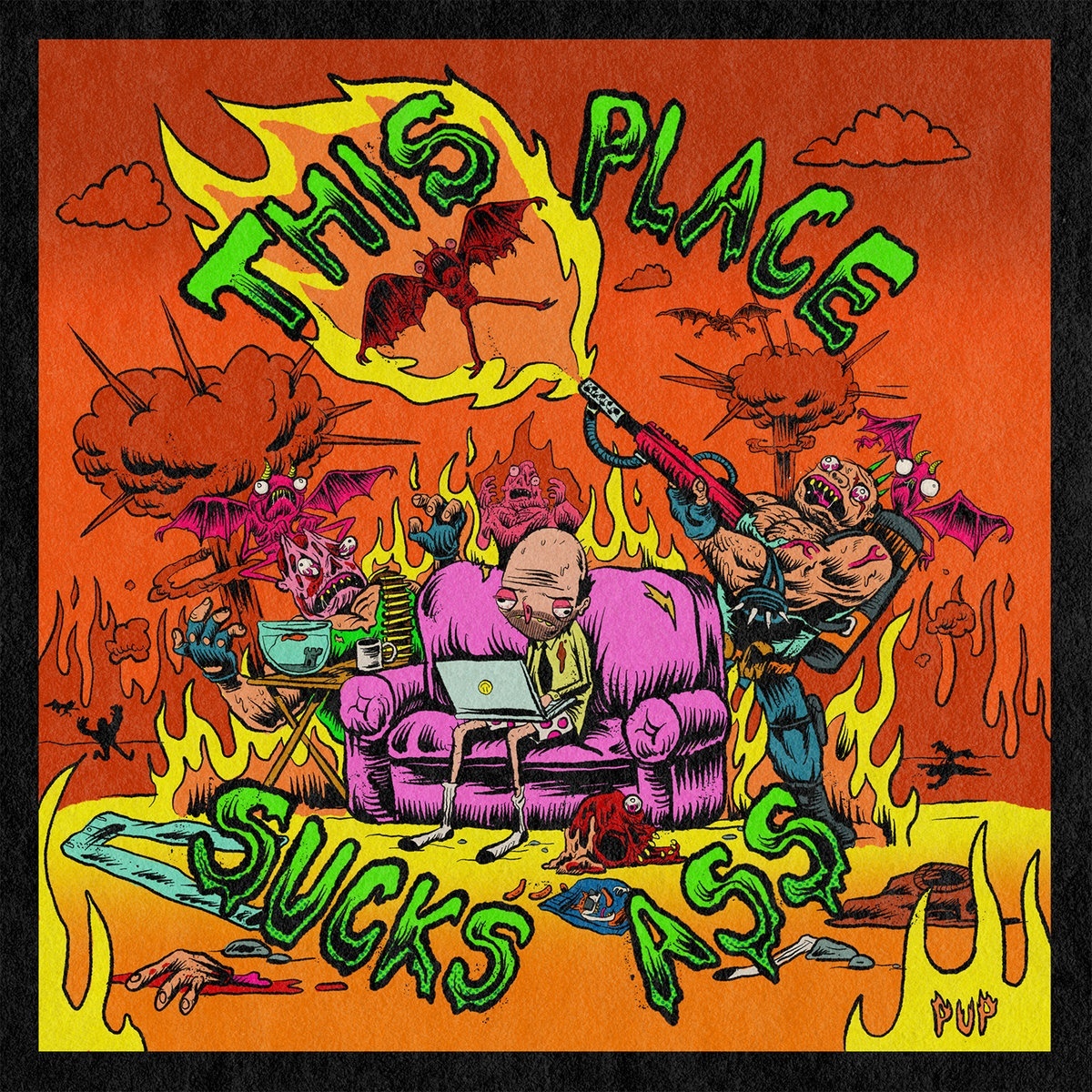 Last year, PUP became punk doyens after the release of their critically acclaimed third LP Morbid Stuff. The record felt like a smile behind clenched teeth. Like the name implies, the album incorporates all the stages of emo band grief (or grievances): rage, frustration, desperation—you know the ones. The LP could be found on many a Best Of list; it secured a sweet lil’ Juno award and a spot on the 2019 Polaris Music Prize shortlist. So, the next question was obvious: what will they do next?

Now, in comes the foursome’s new EP This Place Sucks Ass. And if you thought Morbid Stuff was a little on the nose, This Place Sucks Ass is as obvious as a product placement on “American Idol.” In fact, a handful of tracks, “Nothing Changes,” “Floodgates” and “Edmonton,” were nixed from Morbid Stuff for being too “frenetic or too unhinged.” Now, they’ve found their rightful place on the EP—which is just the right amount of frenetic and unhinged.

Right now, each day feels like we’re gasping for breath. And once we acquire just a little air, it’s immediately released as one, long sapping sigh. We’re constantly bracing ourselves for the next unpredictable moment of impact. It’s simultaneously a vertiginous and stagnant life—and it sucks ass. Yet, it sucks ass for everyone. And with their new EP, PUP encourages us to dance—or mosh—together in the proverbial rain.

Like previous records, PUP leans on self-deprecating, dark humor in This Place Sucks Ass. In a way, they always seem to be laughing in the face of death. In fact, in opener “Rot,” they’re cackling at a hypothetical ending of their career. “Practice my speech in the mirror like: / “I wanna thank the Academy,” sings lead singer and guitarist Stefan Babcock over Steve Sladkowski’s tension building guitar and Zack Mykula’s driving drums. Yet, the one thing keeping Babcock sane is “doing something productive with my self-destruction”. Soon enough, the band joins in for an anthemic chorus that basically states, “This is just me. I can’t help it.”

But the nervous laughter continues on hypochondriac ode “Anaphylaxis.” Babcock’s worrying if his swelling is related to “allergies or something else freaking me out” are underscored nicely by swarming guitars and frantic drums. But the panic does subside, albeit only briefly, as the EP transitions to Grandaddy cover “A.M. 180.” It gets the good ol’ punk treatment: a faster tempo, criss-crossing guitars and a full-bridge breakdown chanting “whatever together.”
The later three songs of the EP stay on theme as well. Although Babcock gets a new mattress, a new coat of paint, and a new set of locks in “Nothing Changes,” he still has the “same old bitter thoughts.” Backed by quiet guitar, Babcock does, however, admit he’ll “begin again.” The full band comes back—along with some beautiful harmonies— and counters his point by repeating “nothing changes.”

Yet, the final two tracks of the album are admittedly forgettable. “Floodgates” repeats the gruesome, snarling energy of the previous tracks but with less charm. “Edmonton” is a vicious, 70-second moment of pure frustration. And although they’re not necessarily lulls— I mean, common, PUP is the very antithesis of that—they’re both not as hookyand lack the nuance to interestingly wrap up the EP. Morbid Stuff felt more carefully constructed. But then again, it’s hard to be concise when you’re just so damn angry.

Eventually, This Place Sucks Ass will be filed underneath the soon-to-be (hopefully) outdated genre of “quarantine releases.” But there’s a good chance This Place Sucks Ass will withstand time. The EP refuses to read as a naive “we’re gonna get through this just fine” narrative, but instead is painfully truthful. This [gesturing wildly] fucking sucks, they seem to say, so let’s sulk together. And if emo and punk aren’t for the collective sulking—I don’t know what is.

Full of emotional catharsis as always, but more dynamic and nuanced than prior Told Slant …