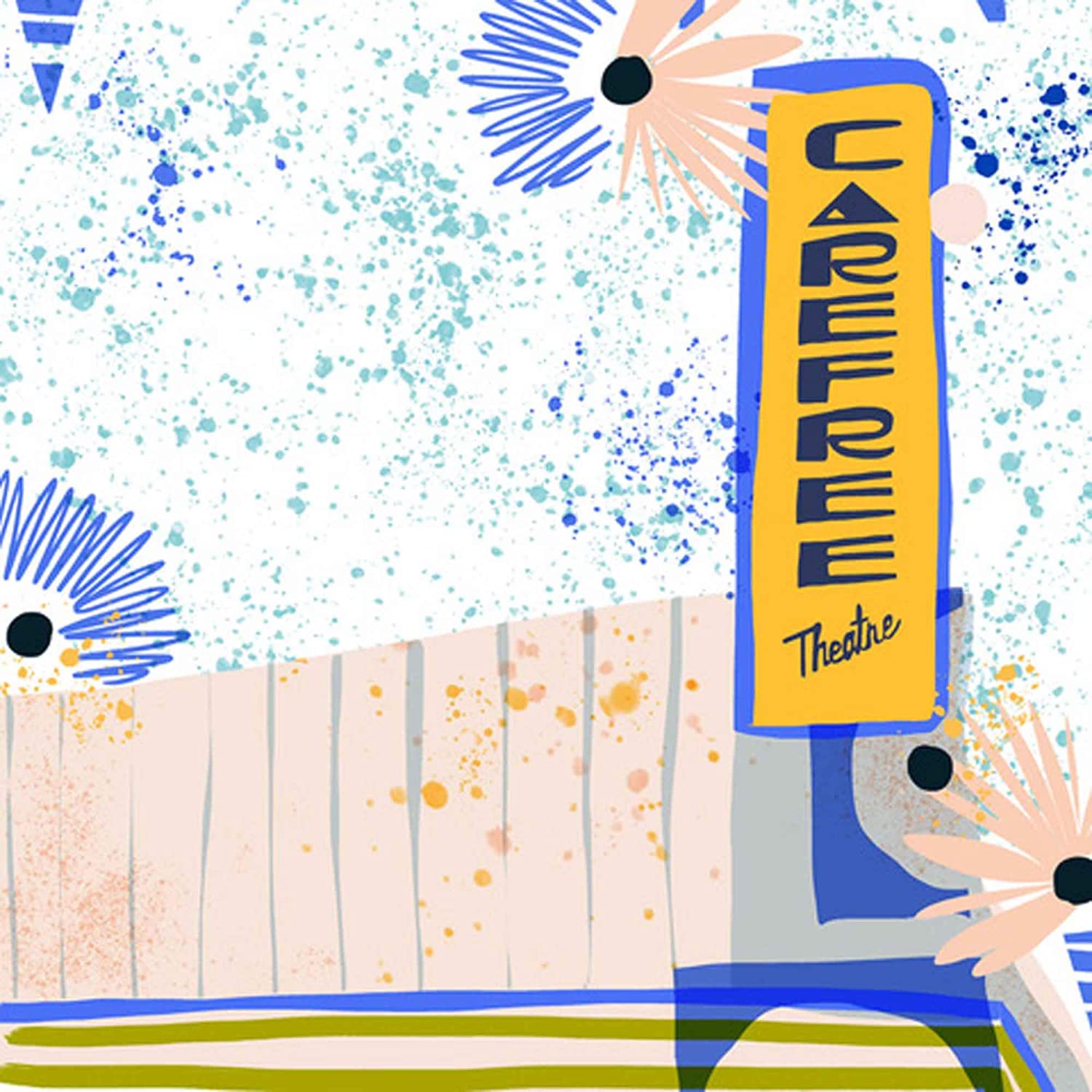 It’s hard to believe more than a decade has passed since the release of Surfer Blood’s stellar debut, Astro Coast. Yet in that time the band, who started out as a group of high school friends in West Palm Beach, has gone through a number of trying times, from their ill-fated jump to a major label for their sophomore album (2013’s middling Pythons) to the loss of original guitarist Thomas Fekete to sarcoma in 2016 to the departure of longtime bassist Kevin Williams (who was subsequently replaced by Lindsay Mills, yet another old high school friend).

It’s fitting, then, that their latest release finds them back where they started on Kanine Records and sounding more like the band heard on their debut than at any other point in the past ten years. And while Carefree Theatre might not necessarily be as immediately accessible as Astro Coast (few albums could claim such a feat given the effectiveness of the opening one-two combination of “Floating Vibes” and “Swim,” the latter one of the best songs of the decade), the seemingly ageless quality of John Paul Pitts’ vocals tie both together nicely.

While Carefree Theatre, named for the only venue in the band’s hometown, maintains an impressive level of melodicism, it lacks the self-assurance and borderline bravado present on their debut. Of course, few who’ve had the decade Surfer Blood have could even begin to sound as self-possessed as the band who emerged a decade ago. If anything, the loss of their youthful swagger helps the emotional core of each song land just that much more efficiently. Indeed, it would be hard to image the band behind dual tracks using the term “jabroni” (both fast and slow!) being able to put out a song about gun violence (“Parkland (Into the Silence)”) that is both affecting and a magnificent ear worm. “I’m sick of hearing that there’s nothing we can do/ This time could be the spark, the start of something new,” Pitts sings before concluding, “Don’t be discouraged now/ We’ll never see the same way/ And after this tragedy we’ll see another day.” Were it not made so explicit in the song’s title, the last line in particular could well serve as a sort of personal reassurance to the band.

And while the band’s sound has largely remained the same, there is a noticeable lessening of the presence of guitar hooks in favor of Jimmy Wuest’s keyboards and a more chordally-motivated approach to the guitars. This is most apparent on “In the Tempest’s Eye,” which feels very much a piece of what they were doing a decade ago in terms of overall feel and lazily melodic flow of Pitts’ vocals. Where before they would’ve relied on a massive riff or two to help drive the song, the arrangement itself feels more musically fleshed out, with all parts serving an integral role within the context of the song rather than functioning in service to the lead lines.

“Unconditional” follows a similar approach, driven by Wuest’s organ lines and complemented by slightly angular guitar lines, both of which ride the waves of drummer Tyler Schwarz’s incessant time-keeping. Again, despite the downbeat lyrics, the band’s penchant for surf-rock musicality helps retain a sunny feel throughout. This mixing of the sunnier elements of sand, surf and summer with the melancholy of adulthood (and 2020!) comes together beautifully on “Summer Tropes,” which again shows the band’s maturation process over the course of the last 10 years. Granted, they were just out of high school when their debut came out, but they’ve lived and learned enough in the ensuing decade to be able to have it come through in their music.

Carefree Theatre feels almost like catching up with old friends; the casual familiarity and shared history remains, if slightly altered simply by the passage of time. For Surfer Blood, their latest finds them returning, both literally and figuratively, to their roots. It’s a welcome return to form from a band who showed immense potential out of the gate before wandering in the wilderness. That they’ve managed to return nearly as strong as before is a testament their ability to craft an exceptional pop song. Look no further than the epic, penultimate track “Dewar” for further proof.