A striking black and white photo adorns the booklet inside the Criterion Collection release of Hiroshi Teshigahara’s documentary Antonio Gaudí (1984). Shot in Barcelona’s Parc Güell, the photo depicts a series of the architect’s undulating columns that drift like waves and bend like trees. In the far distance, people sit on benches, contemplating this majestic creation.

This review is particularly difficult to write because I was meant to spend the summer in Spain, my fourth sojourn to a country that affected me in the same manner that it affected Teshigahara. The son of an ikebana (Japanese flower arranging) master, Teshigahara (1927-2001), traveled to Spain with his father in 1959 from Japan as part of an American-European adventure. While in Barcelona, Teshigahara was struck by the buildings and other structures designed by Gaudí (1852-1926), work that still looks like nothing else in the world. Being face-to-face with these buildings made Teshigahara “realize that the lines between the arts are insignificant. Gaudí worked beyond the borders of various arts and made me feel that the world in which I was living still left a great many possibilities.” 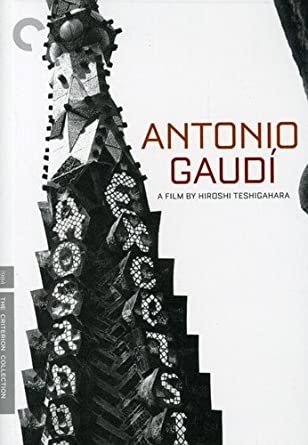 Teshigahara grew up surrounded by the arts and artists as his father was not only a revered iemoto but also dabbled in other mediums, including sculpture. The young Teshigahara, shaken by his trip abroad, devoured European art film and, upon his return to Japan, sought to introduce his friends to the avant-garde. In the ‘60s, Teshigahara made numerous, well-regarded films, including the adaptation of Kobo Abe’s novel, Woman in the Dunes (1964) that is considered his signature work.

Still, his experience in the late ‘50s with Gaudí stayed with the director. Teshigahara returned to Barcelona in 1984, to make Antonio Gaudí, his nearly wordless homage to the architect. Not a straightforward documentary (we learn little about Gaudí’s life other than he went on a hunger strike to see how Jesus felt), the film is rather a breathless exploration of the buildings, statues and other structures that still give Barcelona its distinctive feeling today. The film begins with a brief overview of Barcelona, from an empty, winding street in its Barri Gòtic to a group of people dancing the sardana to 12th murals of Christ and other saints. Then we see the first of Gaudí’s buildings and it’s clear how the architect was both an outlier and an essential piece of Barcelona’s fabric.

Describing Gaudí’s style can be difficult. The buildings seem to flow as if willed from a phantasmagoric nature. The forms curve and undulate. Bright, unexpected colors explode. A roof may resemble a sleeping dragon. A pillar may look like a bone. Playful lizards collide with spiral staircases. Gaudí often used something called trencadis, broken pieces of tile and glass to decorate statues and the exterior of buildings.

Antonio Gaudí feels like both a meditation and a silent conversation between two master artists. Teshigahara uses his camera as paean to this work that exists sui generis in its style. The film ends with an extended look at the Sagrada Familia basilica, still under construction with an expected completion in 2026, that rises over Barcelona like an alien claw bursting from the earth. Teshigahara’s camera lovingly surveys the basilica’s intricate details, allowing the viewer to ascertain Gaudí’s love for God, despite his idiosyncratic style.

Antonio Gaudí is perfect for people like me, those who had summer travels derailed due to the coronavirus outbreak. Though more than 35 years have passed since Teshigahara visited Barcelona, the buildings shown in the documentary still exist. There is a photo of me from 2011, standing next to the columns on the Criterion booklet. Someday I will return there. Someday, like Teshigahara, I will revel in the glory of Gaudí’s otherworldly majesty.