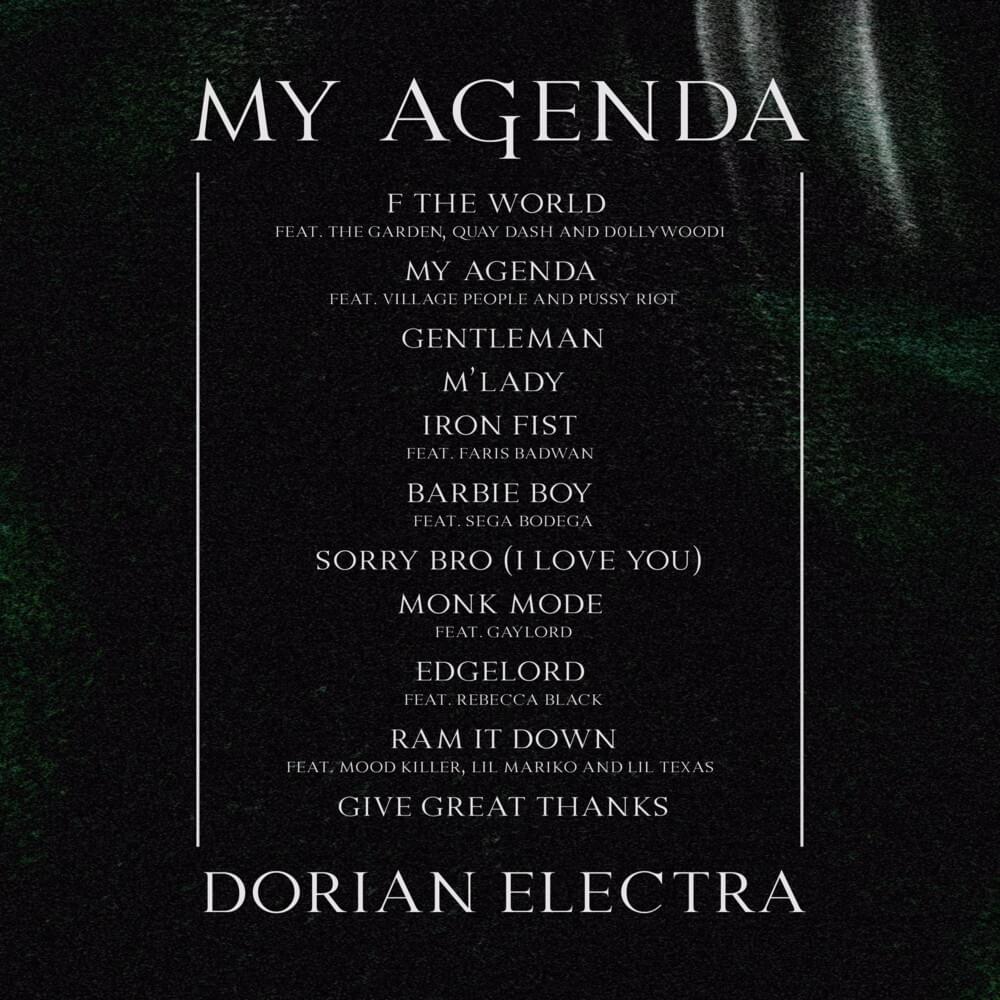 One can’t deny the influence of internet memes. What were once seen as shallow one-off jokes now serve as cultural benchmarks. Despite the frivolous origins, a wave of socially relevant art has emerged around such absurdist humor. So on Dorian Electra’s sophomore album My Agenda, should anyone be surprised when the title track reaches a climax in which they sing about “turning the frogs homosexual?”

While this Alex Jones reference might cause a reaction ranging from shock to utter confusion, for someone who has been following the Houston-born singer, songwriter and performance artist, this is a natural next step. Coming out of hyperpop, Electra wasn’t always quite the shitposter they are known as today. Around a year ago, their full-length debut Flamboyant was equal parts fun and politically biting. The glitchy pop album was deep into left field, but at its core, it remained fairly conventional. On My Agenda, they have leaned into the absurdism, further obscuring what it means to make pop music. Heavily inspired by contemporaries and collaborators 100 gecs, one of the most notable aspects on the new album is the short runtime of many songs, some barely passing the one-minute mark. While their first album was already succinct, Electra takes the idea to the next logical step.

Electra knows how to strike a balance between fun and social commentary. Whereas their debut covered a range of issues related to the LGBTQ+ community, My Agenda is focused on a specific topic that could only have an entire album written about it in 2020: Neckbeards. They’re sweaty, socially inept and sexually frustrated, and Electra’s latest features some legitimate messaging between the lines of its meme-laden lyrics.

Neckbeards, for the record, are consumed with the difficulty of finding a sexual partner to be treated as both subservient and as a queen–hence the rise of the “m’lady” meme. The sad irony behind it all is that the neckbeard likely isn’t having any sex at all, leading them into a deep rabbit hole of festering angst and bitterness against feminism. This peculiar situation leads to some darkly comic writing. Opener “F the World” has the singer flip-flopping between bitter and desperate: “F the world because it hates me/ F the world so I can get laid” may be funny, but given the incel culture that many neckbeards find themselves trapped in, it’s also a depressing observation.

The title track is a nu-metal riff infused ode to the “gay agenda” featuring Pussy Riot and Village People. While the Pussy Riot feature passes by without any real presence, Village People’s powerful vocals make the song ascend to a new level. It’s aggressive and uplifting but still tongue-in-cheek enough to laugh to.

“Gentleman” and “M’Lady” serve as companion pieces, with the former proving to be the stronger of the two. Other than the intense metal hook, the sparse production and painfully short length of “M’Lady” leaves one wanting more. On the other hand, the neckbeard anthem “Gentleman” includes lines about fedoras and “conquesting” a woman accompanied by a hilarious and catchy production featuring a goofy saxophone line. While these two tracks vary in sound and lyrical content, they represent two sides to the same involuntarily celibate coin: “Gentleman” represents the neckbeard who is overly polite and complimentary with a narcissistic undertone, while “M’Lady” is the sexually frustrated hermit describing his perfect woman. No line sums up his mindset better than, “M’lady is sexy/ M’lady is pure/ M’lady is chaste/ M’lady’s a whore.” The music evokes a dark, dingy dungeon that mirrors the deranged ideals of the narrator.

Other highlights include the hilarious “Sorry Bro (I Love You),” which boasts an effective hook and aggressively flirtatious lyrics. On “Edgelord,” the neckbeard character returns as Electra displays their meme knowledge in full force, with references to Heath Ledger’s portrayal of the Joker as well as a line about “living in a society.” Rebecca Black’s feature is mostly disconnected from the rest of the song, but is still a great listen if not for Black’s undeniably charismatic performance.

The two closers are the most aggressively sexual songs in Electra’s catalogue. “Ram it Down” is about exactly what you might imagine. The stark shifts from chorus to verse keep it dynamic, and the closing scream “ram it down” leaves the listener gasping for breath. “Give Great Thanks” ends My Agenda with a powerful piano ballad that’s more pleasant no less sexual. In fact, the production only serves to make the lyrics all the more shocking.

So, what is Electra’s agenda? Sexual liberation, and unadulterated freedom of expression. Within this narrative, the neckbeard isn’t an opposing force; it’s clear that no matter how edgy or offensive, he’s ultimately powerless to stop the wave of feminism he hopes to destroy. His way of thinking is slowly but surely dying, and the deeper he invests himself in those beliefs, the more embarrassing it becomes.

While not up to Electra’s debut, My Agendautilizes a niche ideology to paint a broader picture of society, and the result is crude, campy and tasteless, all in the best way. While it does have a couple of slip-ups along the way, Electra sticks the landing with their absurd mix of nu-metal, pop and dubstep. The combination of genres sounds like a cringe-inducing listen, but it’s best to embrace it, and go along for the ride.

Benny the Butcher and Harry Fraud: The Plugs I Met 2

Fraud elevated the album to a new level, but it's questionable how much further Benny can …