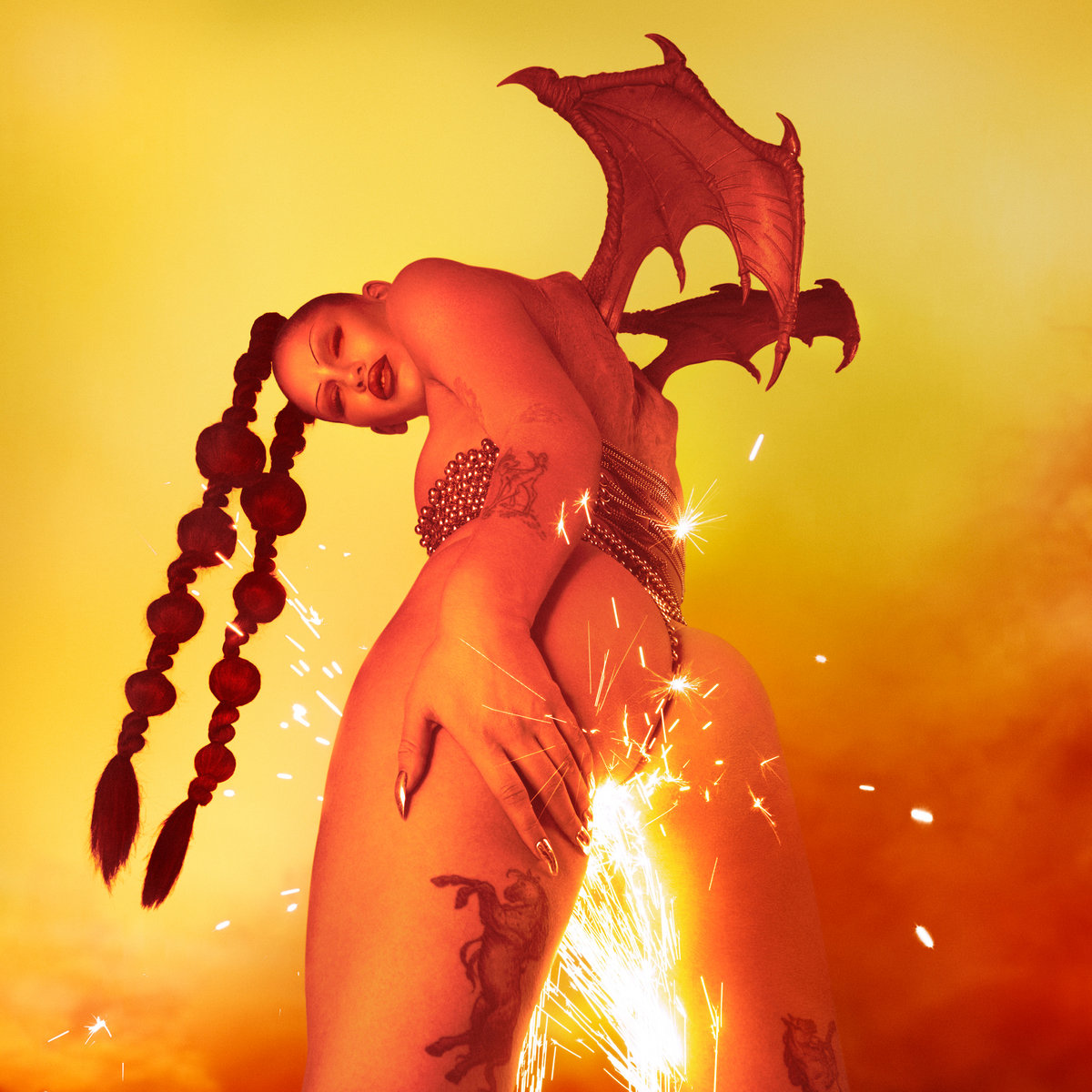 With her one-two punch debut of Metalepsis and RIP Chrysalis, Alexandra Drewchin established herself as a genre-defiant force of nature whose glowing reception from mainstream and off-beat music publications made her one of the purest embodiments of Bandcamp’s potential for giving exposure to off-beat, challenging artists. Since then, she has expanded her considerably wide-ranging sound further, incorporating into her jagged mash-up of medieval structures, glitch electronics and neo-folk elements of club techno, hip-hop and further studio manipulations of effects and recorded sounds. Phoenix: Flames Are Dew Upon My Skin, represents something of a conservative effort for the artist, replacing her complex, angular, deconstructive method with more stately, carefully orchestrated numbers. But if anything, the focused approach feels like a natural outgrowth of her underrated songwriting and capacity for gorgeous instrumentation, synthesizing her unpredictable earlier work into a more cohesive show of brilliance.

Conceived and recorded during an artist residency in the arid Spanish city Zaragoza, Phoenix reflects that climate’s spartan, dry heat. Brittle, reverberating guitar pings out the opening of “Airborne Ashes” before being backed by gentle strings from the Ensemble De Cámara. Small electronic flourishes don’t warp these acoustic elements so much as enhance them, bringing out their lonely, arid sound and filling up the mix while still leaving space between each element. Drewchin’s own ethereal vocals sound like they’re rising over a distant hill like the sun. The ensemble play throughout the album, as do Marilu Donovan and Adam Markiewicz of New York duo LEYA, with whom Drewchin already collaborated on the Angel Lust EP. Their harp and violin are bent around a looping electronic eddy in “Metallic Taste of Patience” that could pass for a Max Richter composition in its complexity yet emotional directness. These tracks provide a bedrock of atmosphere for the rest of the record, teasing out the atmosphere of sun-baked, hard terrain as the backdrop of inner searching.

Inspired partly by the end of a long-term relationship, the album regularly fuses the external stimuli of its setting with Drewchin’s own emotional state. “Below the Clavicle” adds twinkling electronics and strings over a metallic acoustic guitar as Drewchin reveals “There’s a lump at the base/ Stuck in the middle of clavicle” as she struggles to articulate her pain, which erupts in sudden, wild jumps from breathy croon to falsetto shriek. Her halting delivery on “Bringing Me Back” adds pathos to the turmoil embodied in lines like “Seems like the more I say/ The less I mean.” Drewchin’s talents as a folk guitarist have sometimes been obscured by the busyness of her arrangements, but the elegant patterns and firm, ringing way she picks the strings is more evident on this album than ever before.

Previous Eartheater albums have demonstrated Drewchin’s intense stylistic range, often loading songs to (or past) the point of collapse from the weight of so many elements and genres converging. But the grounding element of Phoenix focuses her sound, not unlike how Homogenic and Vespertine honed Björk’s disparate elements into something that maintained her experimental rigor but fit everything into place. And just as Björk found something of the human experience in the prisms of ice crystals and moss, Drewchin finds it in rock and fire.

For all of her compositional ambition as a guitarist, arranger and sound collagist, Drewchin’s most elastic and dynamic quality has always been her own voice, which she employs both naturally and with electronic manipulation in ways redolent of avant-garde divas like Diamanda Galás and Jarboe. With her leaps around her massive vocal range and her capacity to contort her voice into different characters, Drewchin often sounds like her own chorus. Here, by and large, she restrains her voice, employing its sudden eruptions, as on “Below the Clavicle,” for dramatic effect over mere demonstration. For the most part, she settles into a soothing croon; “Fantasy Collision” manipulates her vocals with echo but otherwise leaves her mid-range cooing unvarnished as she spins a darkly romantic reverie that renders a horrific car crash as a vaguely wooing metaphor for clinging to a relationship. On “Diamond in the Bedrock,” she sublimates her interest in hip-hop into rhythmic, staccato cadences that encapsulate the song’s oscillations between the sacred and profane.

The unified sound, delicate vocals and focused songwriting all culminate in the album’s centerpiece, “Volcano,” which immediately establishes itself as the new high-water mark of Eartheater’s discography. Set to a light piano trill and soft guitar amid quiet electronic whirs, the song perfects the album’s metaphorical equation of bad romance and inhospitable climate. “I’m still building mountains underground / I’m still grinding bones to break my bread,” Drewcin sings as the track gradually builds in intensity, her deadpan vocals offset by the swelling instrumentation that reveals the roiling agony within. Phoenix is, in general, the first album Drewchin has made that you could conceivably put on at a gathering without losing aux cord privileges, and “Volcano” epitomizes its art-pop breakthrough, elevating the artist from the daring to the truly sublime.