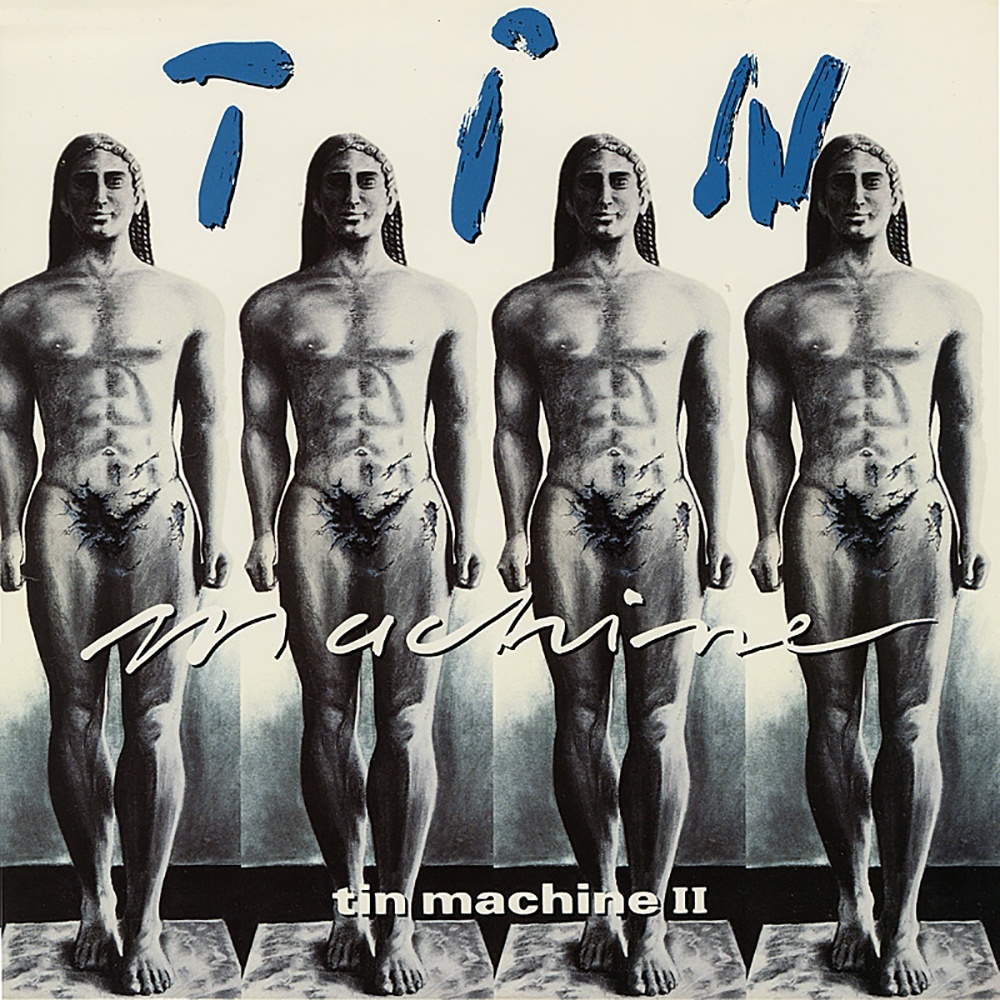 Compared to the relatively streamlined process of crafting the first Tin Machine album, its 1991 follow-up largely demonstrated the pitfalls of a global superstar attempting to create something on a lark. Mostly recorded in the fall of 1989, Tin Machine II spent the next two years being touched up where possible when gaps opened up in David Bowie’s packed touring schedule. That piecemeal assembly is reflected in the final product, which lacks its predecessor’s more unified rock sound and instead shows the band indulging numerous stylistic interests and tonal preoccupations. But if the album does feel too diffuse for its own good, it nonetheless hints at the pent-up creative forces that Bowie had suppressed during his time as a slick megastar on autopilot.

Yet if the album in retrospect shows Bowie’s rejuvenating spirit, the true star of the show may be guitarist Reeves Gabrels. From the heavily distorted, futuristic riff that opens the record on “Baby Universal,” Gabrels darts around styles that Bowie had explored to that point and would go on to traverse in the ‘90s. “One Shot” crosses bright ‘80s AOR as its crystalline guitars with psychedelic wah-wah riffs before erupting in a solo that mixes Robert Fripp’s sharp, effects-laden phrasing with Eddie Van Halen’s frantic, vertiginous scaling. He brings classic glam rock sleaze to “If There Is Something,” and even cranks up the blues that Stevie Ray Vaughn lent to Let’s Dance on “Stateside.” Gabrels’ interest in Nine Inch Nails, an interest that would quickly rub off on Bowie, is also evident; “A Big Hurt” thrashes with furious, over-processed guitars, creating a metallic wall of noise that reveals a surprisingly melodic throughline just like the best of Trent Reznor’s work.

The Sales brothers also acquit themselves nicely. Tony’s shimmering bass chords dance around Gabrels’ fusion guitar licks and springing acoustic lines on “Amlapura,” and he is similarly sinewy on “You Can’t Talk.” Hunt’s drumming is even more versatile, crossing genres as easily as Gabrels. On “Betty Wrong” he sits in a skewed lounge jazz pocket, while he lays down a classic punk pattern to propel “Baby Universal.” On “Stateside,” Bowie even cedes the microphone to Hunt, who reveals a bluesy howl worthy of classic hard rock screamers like Glenn Hughes. He also gets the lead on the sparse ballad “Sorry,” where he adds an emotional strain exacerbated by the light reverb and soft mixing on his vocals.

Lyrically, the album shows the group reaching further than the more straightforward rock songs of the first record. The relatively laid-back arrangement of “Betty Wrong” is undercut by apocalyptic imagery like “Till the sun blisters and sprays/ And every lamb ceases to graze/ When the kiss of the comb/ Tears my face from the bone,” re-incorporating Bowie’s love of unnerving sci-fi imagery to convey rawer, more immediate inner turmoil. Most notably, “Shopping for Girls” tackles the sex trafficking trade in Thailand, something that Gabrels’ journalist wife covered–she even used her husband to set up stings as a fake client. A sensitive topic to say the least, Bowie approaches his delivery of “Snapping pictures of scrawny limbs and toothy grins/ These are children riding naked on their tourist pals” with his trademark deadpan, letting his flat intonation reflect the horror of the situation without cheaply playing it for melodrama. Yet even a simpler number like “You Belong in Rock ‘n Roll” has a winsome charm, using its chorus to suggest that a woman who makes you feel loved and not alone is as rock ‘n roll as any rebellious loner act.

From his journeys through various musical genres to his costuming and style, Bowie always relied on the input of collaborators whose talents and perspectives he generously welcomed. Tin Machine’s stab at a genuinely democratic group involving the artist marked a change from his having the final say, and the group’s albums remain a fascinating curio of an artist working to regain his individual voice, ironically by sharing the reins with others. Tin Machine II is an unfairly overlooked work in Bowie’s discography, yet even in its eclecticism it does suggest that the group had run its course. Still, it is here, and not on Black Tie White Noise, that the Bowie renaissance truly began. The partnership with Gabrels would prove a fruitful one for the remainder of the decade, one that saw Bowie once again following trends while simultaneously suggesting he helped birth those trends in the first place. Here, with the two on an even keel, it’s easier than ever to see just how much the vision of others only sharpened the star’s own.