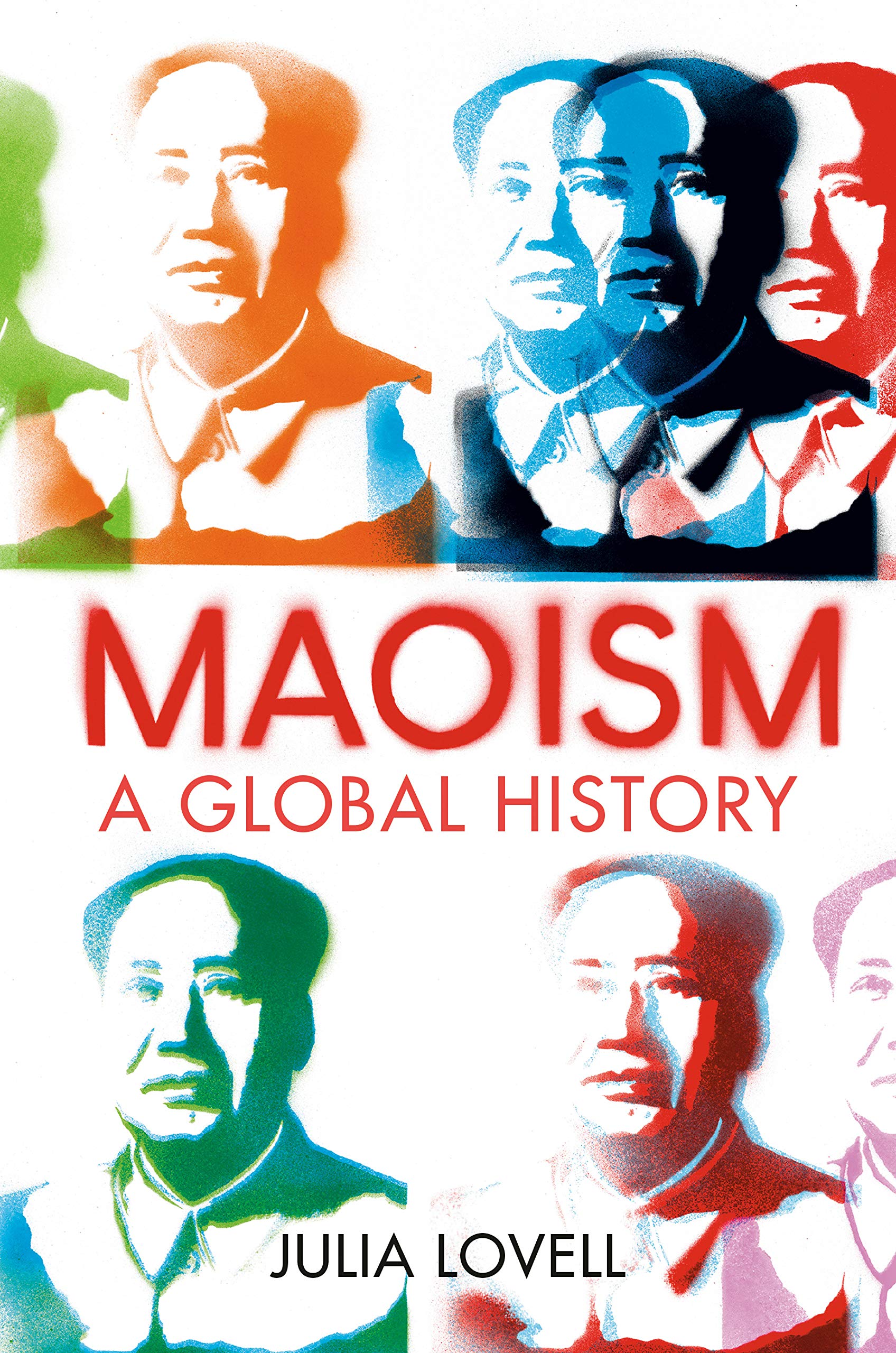 A cynical person might say that Julia Lovell’s new book – Maoism: A Global History, released last year in hardcover and this summer in paperback – was perhaps too perfectly timed to coincide with the renewed hysteria in the West over “the Rise of China.” It is, at the very least, convenient that Lovell’s book hit the shelves in a year when the final U.S. presidential debate spent more minutes on “who will be tougher on China” than on “how do we stop people from going homeless in the middle of a pandemic.” While the origination of the Covid-19 pandemic in Wuhan has certainly brought this rhetoric to a head, this kind of talk has been issuing increasingly from Western parties both liberal and conservative with increasing frequency throughout the last decade. Books like Maosim usually take a long time to make. But I think it’s fair to assume that Lovell – a prominent British scholar on China – and her publisher are smart enough to know which way the wind is blowing.

The argument at the center of Lovell’s book is that Mao and so-called “Maoism” are 1) underrated in the public conception of 20th century history because 2) they have had a staggering global influence that must be documented and reckoned with. While this seems at first a plausible enough reason to write a popular history of the various “Maoist” movements outside of China, the argument crumbles in the face of serious questioning. Whose histories omit Mao and China, and why? This kind of generalization is always suspicious in that it relies on a vague sense of the “public consciousness.” But Lovell’s repeated references to Stalin and Hitler (in comparison to Mao) reveal something about what she means when she says we don’t think enough about Mao or in the right way. The second pillar of this argument is hardly an argument at all – it seems self-evident that the actions and ideology of the leader of one of the most populous countries on earth would be of world-historic significance.

Nestled just below Lovell’s primary argument is the assertion that “Maoism” is so full of paradoxes and contradictions that it hardly constitutes a coherent political ideology. To demonstrate this, she spends much of the first chapter dredging up salacious details of Mao’s personal life (but especially his sex life) that seem to reveal a startling hypocrisy when juxtaposed with some of his most famous quotes. This is neither a systematic overview of Mao’s writings nor of his life – both things Lovell claims are beyond the scope of the book. It is unfair to ask a book like this hold its readership – in this case likely a general, rather than scholarly one – by the hand, but it would have been useful to foreground the discontinuous movements in the book against an “orthodox” Mao. For Lovell, though, the paradoxes and contradictions are too many to even formulate a version of Maoist thought beyond an irrepressibly horny man with a penchant for public rhetoric.

In fairness to Lovell, the salacious details can be fun to read. Her writing is most interesting when she hones in on particular figures like Norodom Sihanouk – the playboy and accidental post-colonial head of the Cambodian state who she compares, troublingly, to the absurd character of King Julian from the children’s movie Madagascar – or Edgar Snow – the American expat in China and author of Red Star Over China. According to Lovell, Snow’s best-selling book was responsible for Mao’s move from niche revolutionary to mythic figure. She spends a lot of time casting doubt on its accuracy – a skepticism that escaped her when she relied primarily on a single posthumous account to relate the gossipy details of Mao’s love life and hygiene – pointing to Snow’s political and personal bias toward the charming young Mao. Within the broad – and sometimes dry – overview of these Maoist movements, however, Lovell’s preference for gossipy personal anecdote and lists of character flaws works to break up the stream of acronyms and places and dates that the book contains. Were one to excise these passages from the book, however, they would hardly be left with a tome.

The pitfall of this approach – flippant, though entertaining, as it may be – is that useful historical context and any understanding of these revolutionary movements as a whole falls away to be replaced by garish sketches. In the chapter of the book dealing primarily with Western adoptions of Maoism – and the so-called “cultural turn” – Lovell spends so little time on the Black Panther party that one would be forgiven for coming away from the book thinking they did little more than stockpile guns and fuck. Her writing on African Maoists is not much better. She seems to be at a loss when it comes to writing about people who may have had good, even noble, reasons for taking seriously Mao’s dictum that “political power grows out of the barrel of a gun” and acting on it.

When it comes to “third-world” Maoists, Lovell tries assiduously to avoid paternalist or racist characterizations – even including the brief aside that the Western accusation of “brainwashing” was overstated and then overreacted to in programs like MKUltra – but falls back again and again on the language of cultism, painting Mao as a Mabuse-like mastermind of world events. But even when she tries to balance the scales – like in the case of MKUltra – the weird game of historical determination Lovell is playing backs her into a corner where she lays at least some of the blame for such Western overreactions at the feet of Mao or his adherents.

The list of failures could run quite long, but Lovell fails most egregiously in the chapter on Indonesia, where a particularly tortured paragraph says, despite her best efforts, that had the Indonesian communists not looked to Mao as an inspiration, the ensuing right-wing, U.S.-backed genocidal reaction never would have taken place. This paragraph ends by stating “without Maoism, Indonesia’s catastrophe of 1965 is hard to imagine.” Indeed. This is, on the one hand, another banal observation – yes, obviously people act within history and have an effect on it intentional or not – but on the other, it borders on genocidal apologetics – a circular reasoning that goes something like “if only the communists had not sought political power they would not have been the subject of brutal political repression.” The reader curious about this period in Indonesia would be better served by Joshua Oppenheimer’s duo of documentaries on Indonesian atrocities (mentioned by Lovell) or Vincent Bevins’ recent book, The Jakarta Method.

Elsewhere, neo-fascist violence during Italy’s “Years of Lead” is reduced to a literal footnote. The anti-communist stay-behind networks of Operation Gladio – which are important for contextualizing the commitment to violent revolution on the part of European Maoists – does not merit a single mention. One might argue that the actions of the West and of the right-wing globally are outside the scope of Lovell’s already broad-in-scope book – fair enough. And one might say I am merely being defensive about the global left – fair enough, again. But it is important to understand that the various movements Lovell tries to document did not take place in a vacuum absent non-Maoist actors. These individuals and groups had reasons for doing the things they did, even if one does not agree with the reasons. But even when Lovell turns her pen to the Great Leap Forward, the Khmer Rouge and Shining Path – the kind of things that might be used as a closing argument against Maoism – the scope of the book is so sweeping that she can only give a shallow account of world-historical happenings and they are blunted of the impact they are usually meant to have.

This is the problem that makes the book unworkable as a piece of historical scholarship. In her introduction, Lovell notes that during the course of her research on Maoism, she found that no single book brought together and juxtaposed the various and contradictory global movements that sprang out of it. Instead of stopping to ask why this might be the case, she rushed to fill the gap she perceived in the literature. In her hurry, she has forgone the depth required of struggling with the conflicts that form the internal and external factors that lead to Maoism’s myriad proliferations.

The result is a book that is both too much and not enough. For those looking to rekindle the Cold War fantods, there are far more thorough and lurid accounts of Mao and Maoism’s failures. For those seriously seeking to study the history of the movements Mao inspired, one book is a poor substitute for the dozen or more one would need to read to do justice to groups and figures as disparate as the Black Panthers, Ho Chi Minh, the Naxalites and Kwame Nkrumah. And, of course, for those seeking to wrestle with the political ideas of Maoism, primary sources are preferable to a book like this.

Maoism: A Global History is a thin and embarrassing work of “scholarship” that will no doubt find a home on the shelves of both dedicated readers of the New Yorker seeking a “nuanced” and “unbiased” one-stop-shop history, and State Department ghouls seeking to crank the dial from “Yellow Peril” to “Cold War 2: Electric Boogaloo.” No wonder, then, that it has received wide acclaim in the popular press and been shortlisted for numerous prizes. It is something everyone can agree on. This week, in fact, the cover of Newsweek bears the image of China’s current president, Xi Jinping, in a photo-shopped black hoodie, sitting behind a laptop, smiling in a manner meant to be sinister as bright yellow text runs announces: “Xi’s Secret Plan to Subvert America: 600 Reasons to Worry About China.” Panic, it seems, sells. You can hardly blame Lovell for cashing the check.

The Hearing Trumpet: by Leonora Carrington

The Hearing Trumpet, though coming long after the initial surrealist burst, carries the pr…