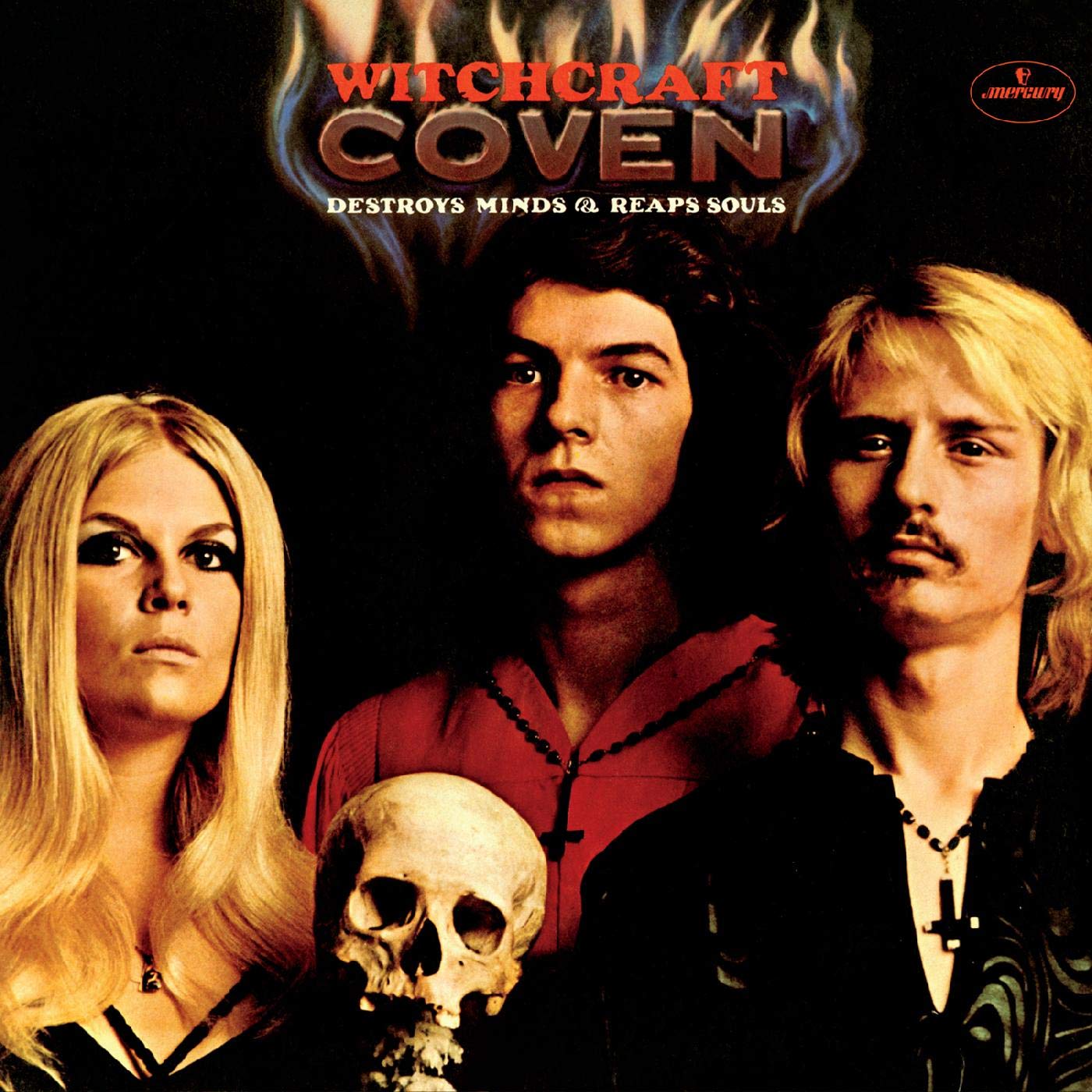 Coven’s Witchcraft Destroys Minds & Reaps Souls is an album whose reputation has been built around its central thematic concept and what it represented in terms of Satanic imagery and dabbling with the dark arts much more so than the music contained therein. Were it to deal with anything but witchcraft, the occult and, most explicitly, Satanism, the album would be little more than another in a seemingly endless line of ultimately forgettable psychedelic relics. But given the prominent presence of Satanism (including a 13-minute-plus “Satanic Mass” that closes the album), it’s the idea of the band and the lifestyle it purported to live that helped ensure their legendary status, introducing more than a few evil tropes that would become de rigueur amongst heavy metal bands in subsequent decades and during the so-called Satanic Panic.

What’s generally pointed out with both Coven and their 1969 debut is that the album opens with a track called “Black Sabbath” and their bassist went by Oz Osborne. Since the album was released a full year before a certain British band’s debut, Coven is generally cited as an influence on the godfathers of heavy metal. And while Black Sabbath (and John “Ozzy” Osbourne) may well have appropriated elements of Coven’s schtick, the two could not be more dissimilar in terms of sound and style. Where Black Sabbath have rightly been credited with helping to establish the basic framework of heavy metal, Coven was more of a psychedelic rock band with prog-leaning tendencies.

In fact, other than their brazen cooption of Satanism, their only other connection to heavy metal is their having introduced the so-called “devil horns,” a sign they employed regularly in their publicity photos and on the album itself, as well as appear to be the first group to utilize the phrase “Hail Satan,” yet another trope that would be co-opted wholesale by countless metal bands more than a decade later. Because of this, they are often cited, along with their corresponding imagery, as being an early influence on the heavy metal aesthetic. To be sure, there is a direct connection there from a purely marketing standpoint; however, musically, they make much stranger bedfellows.

Of course, all the themes and lyrical imagery explored herein would come up time and again with the rise of heavy metal and its obvious over-reliance on Satanism and the like, but many subsequent metal bands had the benefit of being somewhat unintelligible with their lyrical delivery. Here, the words coming through loud and clear, they come off as almost comical cosplay, particularly when delivered by Jinx Dawson’s super-size, Grace Slick-on-steroids vocals: “Bubbling pots of unguents and potions/ Flames revealing the obscene motions/ Od hags murmur in evil ranting/ Voices grow louder and join in the chanting,” she wails on “Black Sabbath.” Meanwhile, “Coven in Charing Cross” is even more unwieldy, opening with the line: “Thirteen cultists/ Held a secret meeting/ Bringing powers of the darkness/ Upon those who opposed them.”

To be fair, “White Witch of Rose Hall” is a pretty great song, using the legend of Annie Palmer as its lyrical basis, and riding a somewhat off-kilter groove that sounds a bit like Neil Young’s “Southern Man.” It’s also one of Dawson’s best overall vocal performances, showcasing the full range of her classically trained voice. There’s also a strange clanging approximation of steel drums that creeps in and out throughout the track, often stumbling over the more overly-exuberant auxiliary percussion and wandering, almost atonal bass line. The problem with the album itself is that, while there is certainly a thematic through line, there isn’t necessarily a uniformity to the music itself. The band goes from psychedelic rock to flashes of prog to almost folk-like motifs to several instances of combinations of all these and more.

It’s all really very silly and more than a little over-the-top in its wanton ridiculousness. But then again, much of what was being recorded and released in the late ‘60s was as well. Everyone was attempting to cash in on the hippie/counterculture aesthetic while it was still a viable commodity, thus allowing a number of otherwise bad ideas to see the light of day. And while much of the music released during this time and under these pretenses sounds pretty terrible to modern ears, it nonetheless serves as a time capsule of where creative types – regardless of their level of skill or talent – were at that exact moment in time.

Much like our modern era in which anyone can (and often does) record and release whatever they want, the late ‘60s offers a glut of music to sift through. And, like our current age, much of it is not worth more than the most cursory of listens. Yet there are still and handful of curios that rise above the fray, earning a bit more attention than their contemporaries for one reason or another. In the case of Witchcraft Destroys Minds & Reaps Souls, it’s the album’s bold dalliance with Satanism, the occult and the one-two combination of the “Satanic Mass” recitation and accompanying image on the album’s gatefold showing Dawson nude on a slab during the ceremony. Yet like the image itself, “Satanic Mass” is rather tame by contemporary standards and is, admittedly, alternately dull and laughable due to the over-the-top recitation of the head priest (sounding here a bit like a cut-rate Ken Nordine).

That the band would ultimately come to be better known for its hit recording of the theme song from Billy Jack, “One Tin Soldier,” less than two years later shows just how much their debut was little more than a bit of cosplay aimed at tapping into the then burgeoning interest in the occult and satanism. Of course, given the events of August 1969 at the hands of the Manson family, it’s easy to understand why one might want to put some distance between themselves and the new public face of satanic evil. That the band’s label, Mercury Records, was quick to pull the album from circulation at the time due to a mention in an article in Esquire about the Manson family and their alleged ties to the occult only helped to fuel the idea of the album as a sort of forbidden fruit. It’s certainly worth checking out if you’re into either the idea of witchcraft, Satanism and/or the occult in musical form or middling late ’60s recordings. But, alas, it is far from a lost or misunderstood masterpiece.