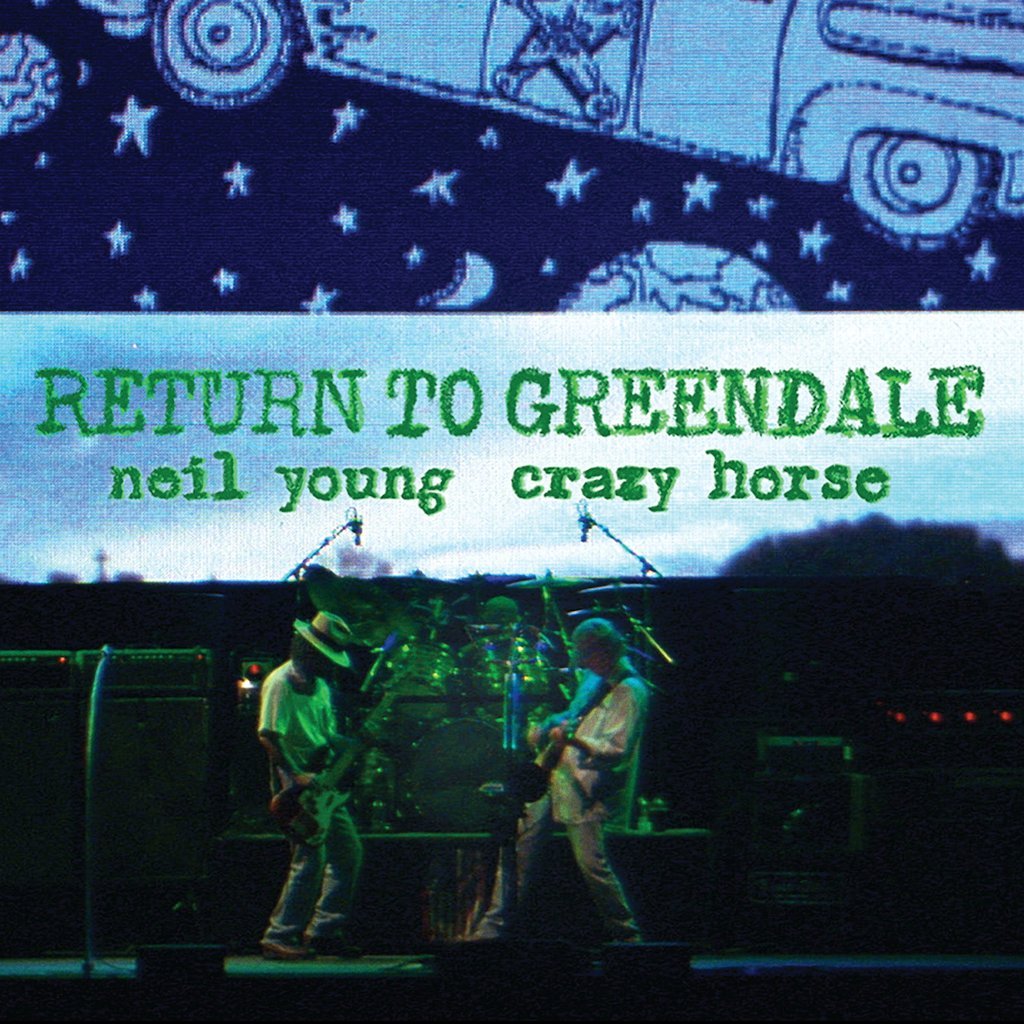 Neil Young’s 2003 album, Greendale, arrived with considerable commotion. Young and Crazy Horse debuted the album unexpectedly on tour, irritating concertgoers while building buzz for the new endeavor, a loose rock opera about a rural family dealing with crime, media encroachment and ecological crisis. The album received mixed reviews, but Young sounded energized and focused, the big vision driving true inspiration (the work even led to a graphic novel adaptation, something most of us are glad Tommy avoided, at least if Ken Russell took up drawing). The release of Return to Greendale gets the musicians on stage, providing the impetus to revisit the whole project.

The new releases don’t vary the standard recording much. Crazy Horse, often the perfect backing for Young, sounds its best when loose and ramshackle, and the Greendale music suits that approach. The albums’ weak point, though, comes primarily from the consistency of its sound. Nearly every track rides a midtempo blues-rock groove. While the songs have some memorable hooks and solos, the persistence of tone for well over an hour means that it can wear on listeners who don’t fully dive into the story.

Alternately, it also means that the story – such as it is – stays at the fore. Criticisms of the album address the scattered nature of the tale, as if rock operas or concept albums have ever been perfectly clear in their narratives. Young does less to follow a single seam than he builds an image of a family in a given community. The central narrative, revolving around a young man who shoots a police officer at a routine traffic stop, makes sense, and the shift to the officer’s widow in “Carmichael” becomes surprisingly moving.

The album doesn’t tell a nice, formally bound tale, spinning off a few ideas to sketch a small town. Grandpa’s resistance to the media develops his character and the attitude of the town, but it also comments on our own cultural relationship to information in the sound-bite era. The variety of topics addressed doesn’t weaken the story – it complicates the picture. Young (mostly) avoids glamorizing small-town life, but he finds plenty of places for empathy while making broader points.

The dramatic shift comes in the final three songs when granddaughter Sun Green enters. “Bringin’ Down Dinner” transitions to her character, though her sudden ecological battle feels a bit out of place. The closing sequence references “After the Gold Rush” as Sun fights for Mother Nature against big industry. By the album’s close, she and Young become interchangeable in their plea for the environment.

The live recording doesn’t do much to reshape understandings of the original album, although the video (which includes scenery, actors, video-within-video, etc.) contains the fullest realization of Young’s idea. That idea will likely remain divisive, but Young’s album-length writing (including the use of lyrical motifs and surprising shifts away from the main line) shines. The steady music supports the narrative almost perfectly, and while more variety might be nice, few sounds other than this grungy blues would support the struggles and even hopes of Greendale. Appropriately, Young and Crazy Horse make a live spectacle of a work with more longevity and value than its initial appearance might have suggested, and if Return to Greendale doesn’t provide much newness, it provides all the power of the original with just a touch of perspective added.