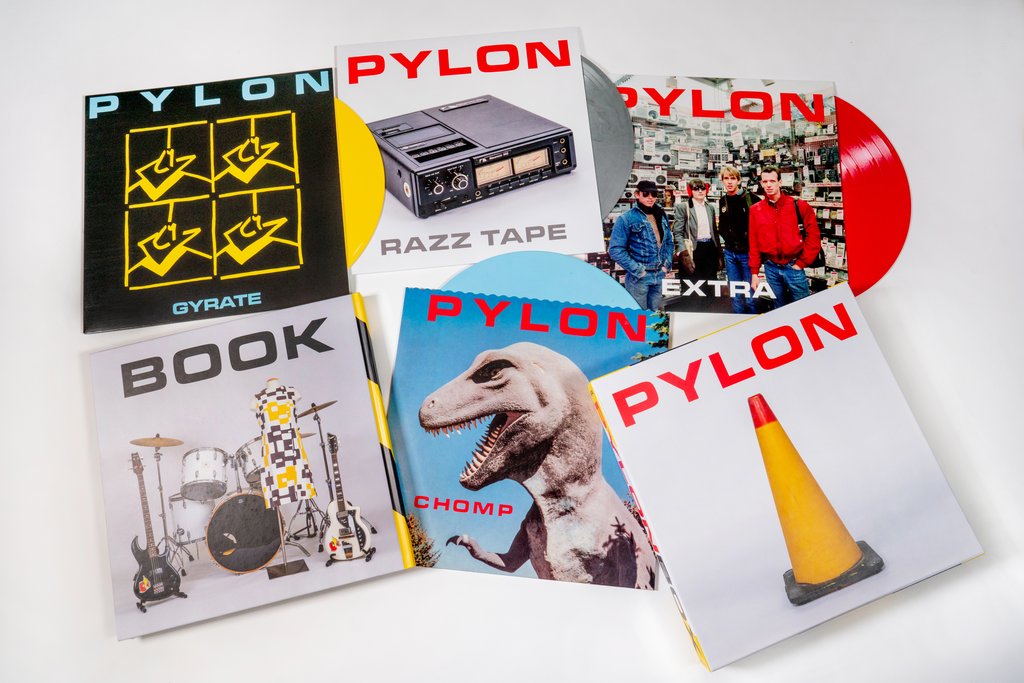 Ninety minutes east of Atlanta, Georgia is Athens, which for decades has been a factory of music culture, churning out some of the best acts of the 70s, 80s, 90s and 00s. R.E.M. Neutral Milk Hotel. The B-52s. Most of the members of Deerhunter grew up in the city before relocating to Atlanta. It’s a hot bed for inspiration, and one of the earliest examples of this comes from the small, slightly obscure post-punk/art-rock quartet Pylon. Four decades after their debut, the band’s two albums have been repressed to vinyl from original tapes, accompanied by a 200 page hardbound book, and two additional LPs of unreleased material. Unnecessary additions aside, Pylon Box does precisely what it should: it lays well-warranted adoration on a beloved post-punk band.

Finally being unearthed for this box set is the first actual recording by Pylon affectionately titled The Razz Tape, an homage to their longtime friend Chris Rasmussen who recorded the album for them. This early peak into band is wonderfully eye-opening as to the process these art school students went through just to record essentially a demo. Rasmussen goes into detail in the liner notes just how unique of an experience it was, repurposing the second floor of his record store for the recording. Listening to the tape it’s near impossible to tell that lead singer Vanessa Briscoe Hay recorded her vocals in the hallway, or that the amps were pointed towards each other with a blanket over the microphone. DIY at its finest, but listening to The Razz Tape gives no indication that things were done so frugally, which adds a spice to the sound.

Their late guitarist Randy Bewley truly knew how to bring that college radio sound to his performances. In every instance, specifically “Modern Day Fashion Woman” his grooves resemble Crazy Rhythms, despite being far removed from the aesthetic of The Feelies in almost every other way. Bewley’s life was sadly cut short in 2009, but his fingerprints over this box set are a testament to the dedication he had to his craft. The Razz Tape unveils this rugged approach to post-punk that is almost completely absent from today’s iteration of the genre. “The Human Body” starts the tape off, the track ended up in the middle of their debut Gyrate, but just hearing both side-by-side warms the soul. There’s nothing wrong with the final versions of these songs, they still sound just as pristine as they ever did, but to hear them in their infancy stage – the band and the songs mind you – is a sound to cherish.

The true gems of this tape are forgotten cuts like “Modern Day Fashion Woman.” Appearing in two versions here, the deranged cheerleader balking from Hay is stunningly charming, and it’s a shame that it never found a home on either of their albums. That “Athens sound” is there all over the place, with affectionate bass tones and Hay’s guttural belting – you can just envision the muscles in her throat tearing as she dredges up the force. Other unearthed tracks like the Gyrate Plus closer “Functionality” and “Efficiency” bolster the tape’s feel as a lost debut album. With so much of this just now out there to be consumed it could take years for any of it to really settle in.

“Cool” resurfaces too, not just on The Razz Tape but on the other LP of unreleased material simply called Extra. The less bountiful bonus is largely rough cuts, live recordings, alternate takes of album tracks, but tucked away at the tail end is “3×3,” which for years was only available on bootlegs. It’s about what you’d expect from Pylon back in the day, rugged and volatile like a Black Flag homage, but it lacks the flair of their later material. Of the two bonus discs, Extra is the least essential, highlighting largely alternate takes that don’t add or subtract anything from the originals.

Gyrate has never not been great. With the boom of the internet age of music giving everyone the ability to seek out the music that they wanted without having the radio or MTV shove it down their throats, bands like Pylon flourished. Whereas the 2007 remaster bookended the album with singles and the Pylon!!! EP for some reason, the Pylon Box version is strictly Gyrate as it should be. It still blisters as it should, and while 1983’s Chomp is no slouch, the true classic from Pylon is their debut. It mixes a healthy dose of post-punk and new wave, with Hay’s vocals firing on all cylinders. The sound emanating from her would go on to influence bands like Priests, whose frontwoman Katie Alice Greer uses the same throaty delivery when scorching the male-dominated world with her venomous lyrics.

There’s no reason to ignore Chomp though. Sure, it came right as the band was winding down and it lacks the energy of its predecessor. But over the course of its 42 minutes and change, Pylon push their prickly edges towards that warm new wave center. There’s a larger emphasis on synths and more saccharine vocals from Hay. Closer “Attitude” resembles a hybrid of Deerhunter/Atlas Sound mechanics; it veers in both directions and Hay even sounds like Bradford Cox at times. Chomp was and still is viewed poorly in comparison to Gyrate. Pylon take more liberties with their sound and the exhaustion is felt throughout. On the flip side, they don’t outright abandon the textures they established on their debut, they just polish them a bit. “Crazy” takes a page out of the same rule book Real Estate used almost three decades later, giving us a more surf rock tinged moment. Chomp is everything a sophomore album should be – it moves the needle on what a band can do, and Pylon exposed themselves as a band who wanted to do more with what they had.

The accompanying book further establishes the impact of Gyrate and Pylon in general with excerpts from female rockers Corin Tucker and Carrie Brownstein of Sleater-Kinney. Tucker recounts a road trip to Athens to explore the music scene she’d only read about, and while there catching a reunited Pylon on stage in 1990. This brief reunion came after R.E.M. – in the midst of a commercial and critical high – declared Pylon to be the best American band in rock. All eyes shifted to the band and a reunion was underway to capitalize on this newfound adoration. It wasn’t the only brush with mainstream that Pylon had either. They previously opened for U2 on their War tour, but as the decades pass, the next generation of music lovers need to reopen that treasure chest of forgotten bands, and Tucker did just that. Brownstein directly links Pylon to Sleater-Kinney’s creative process, explaining that during their brainstorming sessions they’d just spin Gyrate and discuss. Famed rock puppeteer Steve Albini chimes in too, crediting Pylon as one of his favorite bands from those early years and helping to open his eyes to more music landscapes.

There’s a wealth of information to grasp, with dozens and dozens of photos snapped during their early days, notes that were written on pieces of dirty paper and tales of tile factory work on the weekends and jamming during the week. Pylon’s blue-collar aesthetic has never diminished, the band still viewed as a respectable act with a workhorse attitude towards their passion. With Pylon Box, the gaps are now filled in, and we can fully see the band without any hazy lenses. Here is a band that did what they wanted in their short amount of time. They never needed a third album, as The Razz Tape acts as a crude but thrilling unofficial debut. Despite the unnecessary addition of Extra, the box set sums up one of American post-punk’s greatest pioneers.