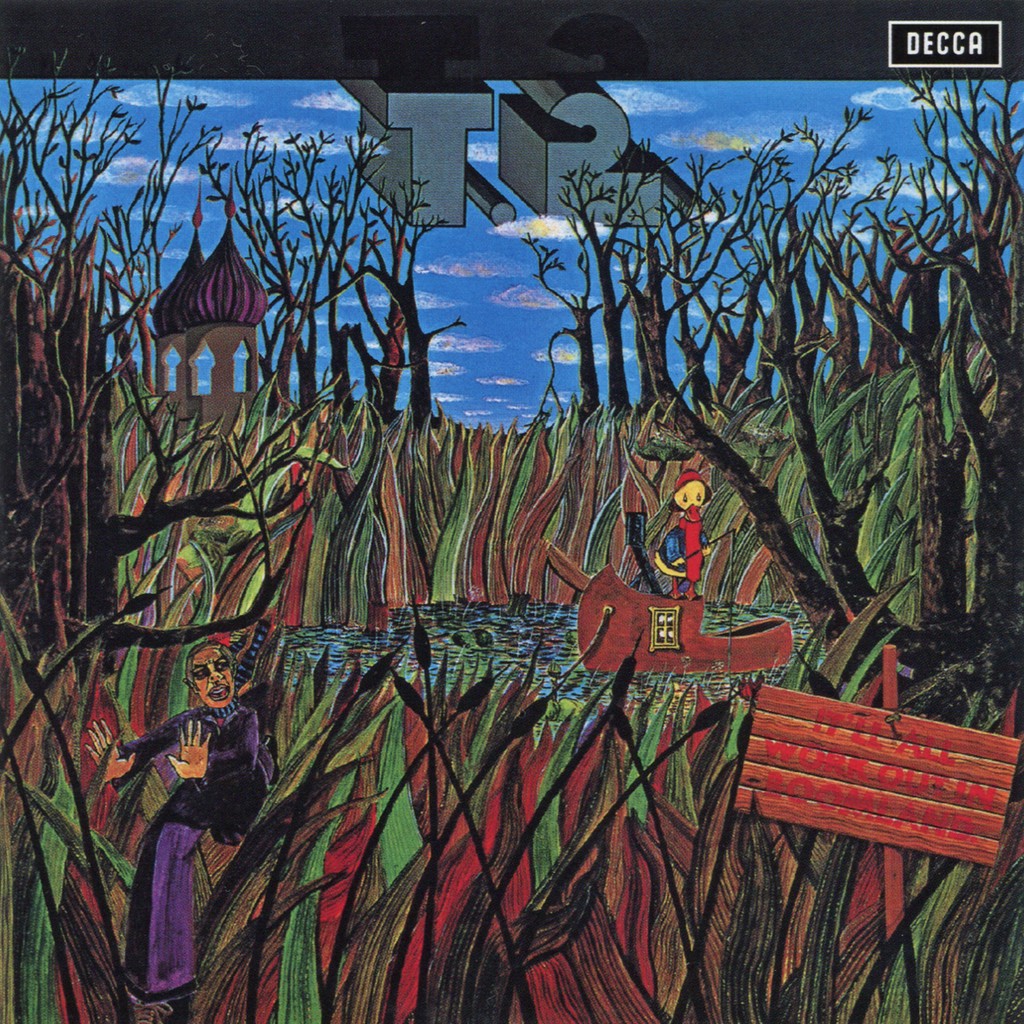 Released in July of 1970 on the Decca, T2’s debut album It’ll All Work Out in Boomland should’ve signaled the arrival of an impressive new talent. They were poised for success, having played a handful of big-name clubs in London, several prominent festivals, and a smattering of television appearances. Their music was being praised for its heavy, progressive take on the psychedelic sound – think some combination of Cream and the Jimi Hendrix Experience in full power trio mode, coupled with extremely tasteful prog flourishes and a sort of proto-metal feel – and, despite their seemingly impossibly young age (guitarist Keith Cross was on 17 at the time), had an already reputable CV in terms of membership in previous groups. In other words, they seemed to have all the requisite palmarès of successful bands bridging the gap between the psychedelic hippie sounds of the late-‘60s and the heavier, more metal-leaning displays of guitar virtuosity that would come to define much of ‘70s rock.

Instead, It’ll All Work Out in Boomland barely appeared in shops, causing sales to be virtually non-existent and, within a short time, the once promising young band with a lineup of impressive talent and seemingly endless potential had called it a day. It’s certainly not an uncommon story in the annals of rock history; the stacks are full of such groups who, for whatever reason, simply failed to resonate with a wider audience. But the difference between T2 and their fellow also-rans is that It’ll All Work Out in Boomland was and remains a stellar accomplishment, one that should’ve placed them firmly in the hearts and minds of far more listeners than the ardent few who have come across them over the years.

There are many bands and albums whose reputations have been overinflated via the collector market over the years; original copies demanding absurd prices, creating a crate-digging frenzy for albums which, under normal circumstances, would be wholly (and more often than not, right) ignored. But It’ll All Work Out in Boomland is that most singular of legendary albums in that it’s actually good and well worth hearing by anyone with even the most passing of interests in that wild and wooly transitory period in pop when the music was being bent and stretched into new and exciting directions.

Lead-off track “In Circles” charges out of the gates with Cross’s stuttering, frenzied guitar attack in perfect lockstep with Pete Dunton’s pummeling drums, sparing nicely with Bernard Jinks’ muscular bass work. At more than nine minutes, “In Circles” is a somewhat daring opening statement, however given its surprisingly heavy nature and effortlessly suite-like structure, the largely instrumental piece never once feels overlong. Running through a series of vaguely blues-based riffs, the song races headlong into its opening verse and the first instance of Dunton’s hazy vocals only to breakdown to almost nothing as the chorus reaches its conclusion. It’s a mercifully brief respite, offering a bit of a breather before they charge back into the almost angular, ping-ponging guitar riff that subsequently leads into some truly impressive, adventurous (and surprisingly melodic) soloing from the teenage Cross.

It’s within this solo section that the band lays everything out on the line, Dunton and Jinks deftly sparring like two elephantine giants across a rock strewn ramparts, while Cross pushes his instrument to the extremes, often sounding on the brink of explosion, largely avoiding blues rock cliches and opting for original lines and motifs. Coming from an era of Jimmy Page, Jeff Beck, Jimi Hendrix, and Eric Clapton clones, it’s incredibly refreshing to hear such original playing from such a young guitarist. Jinks and Dunton prove themselves equally capable of matching Cross’s originality during their brief bass and drums showcase, taking the reins for a few brief bars before the guitar returns frantically bending and slashing its way across the track.

The closing moments threaten to explode as the song pushes well into the red and Cross’s guitar somehow finds yet another gear. Rather than allowing things to explode into a grande finale, they pull back at the very last moment, deploying a musically complex unison riff hinted at nearly seven minutes prior that quickly and rather abruptly brings the hard-charging opener to a full hard stop. As the listener is left to catch their breath and attempt to process what was just heard, the slow, balladic opening moments of “J.L.T.” show off an entirely different side of the band. Hauntingly beautiful and vaguely psychedelic (think Meddle-era Pink Floyd), “J.LT.” benefits immensely from the band’s melodic gifts, here shown both in Denton’s vocal and a stately keyboard line courtesy of Cross. At just under six minutes, it’s the shortest of the album’s four tracks, but it’s also the most musically diverse, showcasing the group’s ability to go both big (check Denton’s increasingly frenzied drumming leading into the solo section) and surprisingly sophisticated, as evidenced in the song’s keyboards-and-horns-lead instrumental section featuring a Herb Alpert-esque melody that continues to build on itself all the way through to the song’s conclusion.

“No More White Horses” finds the band venturing into much heavier territory, sounding very proto-metal and offering up yet another fine showcase for Cross’s fiery playing. And while here he uses a more established, blues-based solo vocabulary, it’s nonetheless delivered in such a way as to sound original and vital in its insistency. When the track suddenly breaks into an acoustic passage, the whiplash shift is almost uncomfortably jarring. But just as the listener is settling in, the horns and Cross’s electric return, enlarging the sound to massive proportions. This funhouse mirror approach continues through the first verse (yet another acoustic section) before erupting into more guitar pyrotechnics, harmony vocals, horns, contemplative keyboards, and Denton’s relentlessly punishing drumming. Nearing the seven-minute mark the band again heads into “In Circles” territory a well-deployed barrage of guitar, symphonic horns and merciless drumming. All of this slowly morphs into a bit of tape manipulation and musique concrète outro section that is absolutely stunning.

Epic closing track “Morning” incorporates all of the previously established elements and facet’s of the T2 sound, maximizing each, taking up the whole second side and running to an exhausting (in a good way!) 21 minutes. Their ability to engage in dynamic extremes while retaining an exquisite sense of melodicism shows an almost unprecedented level of compositional maturity. Near the song’s halfway point, they engage in a bit abstract experimentalism that allows Cross to show off the depth and breadth of his adventurous approach to the instrument. Using feedback, shrill overtones and eerie string scratching to create a sense of creeping dread, he just as quickly brings the song back into laser focus on acoustic.

“Morning” is the band’s most challenging offering simply due to its length and proto-prog-on-steroids approach to suite-like song structuring. It, like the remainder of the album, is alternately exhausting and exhilarating, making It’ll All Work Out in Boomland a particularly mind-blowing listening experience for those unsuspecting listeners coming at the album with little-to-no expectations. Perhaps having been burned more times than they’d care to admit with regard to purported “lost masterpieces,” they prefer to keep their expectations low so as not to be disappointed. It’ll All Work Out in Boomland is far from disappointing, instead showing itself to be a true masterpiece of the era, one inconceivably lost somewhere within the fabric of time.

That the band wasn’t able to originally capitalize on the enormous potential of this album is a shame. Subsequent interest in the band saw them regrouping for a handful of albums over the years and a spate of original-era recordings reexamined and packaged for mass consumption, but none manage the same exhilarating heights as their brilliant opening statement. It’ll All Work Out in Boomland demands reassessment and a greater audience than it has up to this point received. A true lost classic.