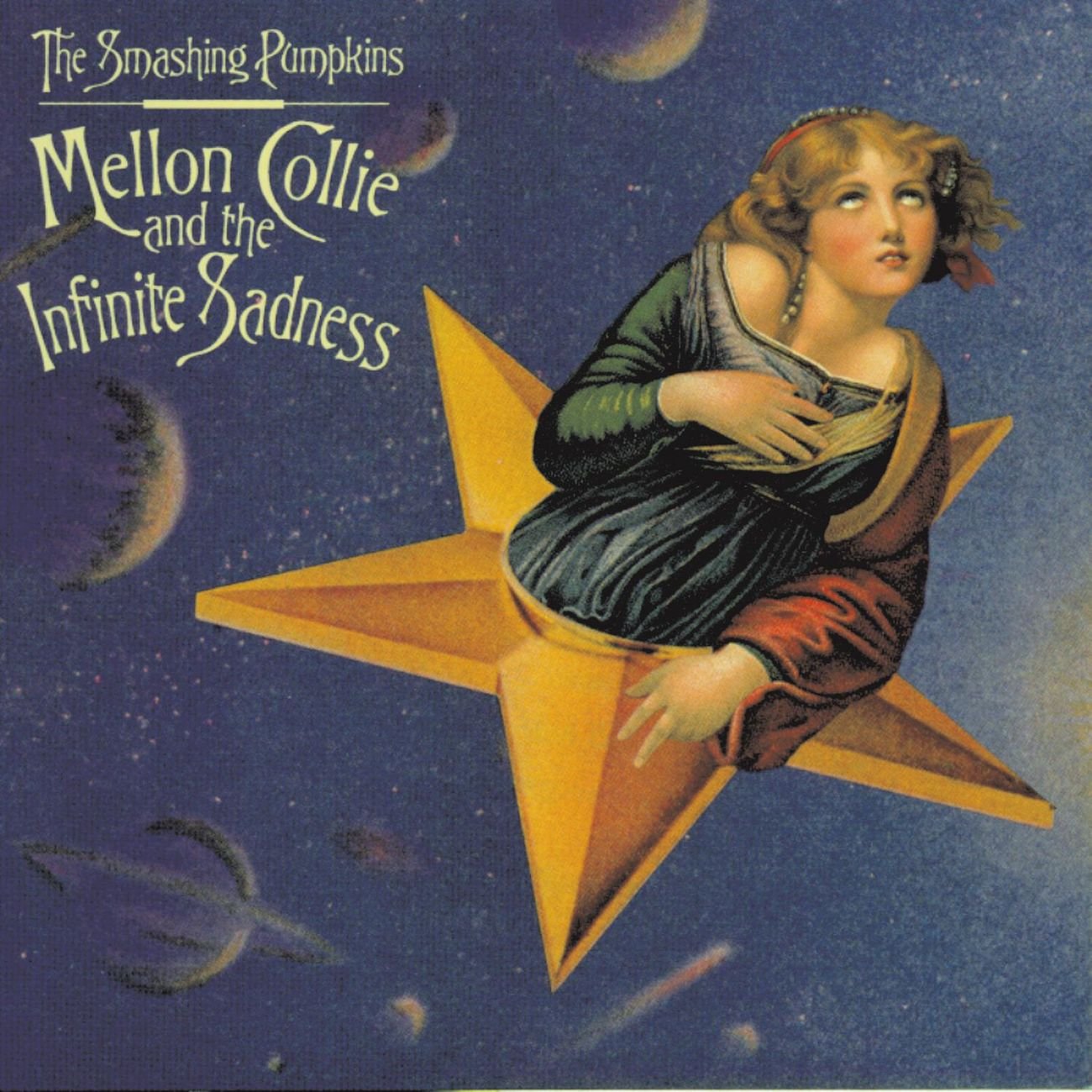 Mellon Collie and the Infinite Sadness is a bit of an anachronism. It’s the sort of album that could only have been made in the ’90s, sure, and its runtime uses the the then-dominant CD format to its fullest potential; only in the heady, hubristic record industry of that era could a double album expect to be a financial success. Yet the concept feels kind of outdated; after all, we were in the middle of the alternative revolution, a generational shift in how music was created and consumed, and here was Billy Corgan putting out a two-CD concept album with enough grandiosity and arrogance to put both Roger Waters and Pete Townsend to shame. In an era where rock stars tended to shy away from big statements and attention, Corgan was inviting it with an ambitious project that was clearly intended to be his masterpiece.

Was it, though? Not really. Over time, Siamese Dream has taken up the mantle of the Pumpkins’ best-ever album, and while those who were around for the Mellon Collie hype still have a fondness for the album, it’s a decidedly mixed bag for modern ears. For starters, there isn’t much of a concept to begin with; it’s more of a collection of odds and ends, a chance for Corgan to indulge in as many of his ideas and obsessions that he could commit to tape. The distorted, shoegaze-inspired grunge of Dream can be heard here, but there are elements of New Romantic pop, death metal, and electronica, as well. Truthfully, there’s a lot to like about this album; it has a few of the Pumpkins’ best songs, including one or two that may be the best pieces of music that Corgan ever wrote. As a whole, though, it doesn’t really work; it sacrifices direction for creative zeal, and not all of Corgan’s ambitious ideas were executed well. It arguably works better in the current era of streaming playlists, as it bounces from style to style and mood to mood in the way that a mixtape would. But mixtapes don’t flow in the same way that albums do, so here’s an attempt at a more manageable, more cohesive version. This still runs at the length of a double LP, but at about one hour, it would only require one CD.

Mellon Collie could be divided into two stylistic halves: its hard rock/alt-rock half and its weird pop half. Generally, the latter is better than the former, but that doesn’t mean the crunchier side of the album doesn’t have interesting stuff. Case in point, side two’s opener opens with a fair amount of doom and menace as its stuttering, Fugazi-aping opening seconds give way to a persistent stomp. When it cuts off abruptly after four and a half minutes, you’re left wishing it kept going.

Corgan’s metal flexes here and elsewhere tend to be his worst songs, largely because they use layers of distortion and Jimmy Chamberlain’s virtuoso drumming to disguise some pretty flimsy melodies. “Jellybelly” is an exception; it has all of the aggression that Corgan strives for, yet it leaves room for hooks in its chorus.

This is a 90’s alt-rock album; you have to front-load the singles. While “Zero” has a few of Corgan’s clunkiest lyrics (and we will get to how bad some of the lyrics are later), the song’s greatest verbal offense (“God is empty, just like me”) isn’t so bad that it throws off the rest of the song, which is still one of Corgan’s best straightforward “rock” singles.

After about three songs of doom and gloom, it’s time for a brief respite of positivity, but it’s the kind of positivity that Corgan likes to sneak some venom into. Lyrically, Corgan may be flaunting his ego a bit (“My life has been extraordinary/ Blessed and cursed and won”), but it weirdly fits with the inward scope of the album and Corgan’s songwriting as a whole. Also, this features some damn-near life-affirming guitar work from Corgan and James Iha, so it stays.

After the (arguably) self-centered nature of the first side of the album, this provides a bit of empathy. One of Corgan’s underrated skills as a writer is how he appeals so directly to an adolescent’s perspective on the world, and while that can sometimes lead to embarrassing stuff, it can also lead to a song like this, which feels like an arm around the shoulder of the listener.

Mellon Collie features two attempts at extended prog freakouts, and this is the one that fits in the most both with the album and with the Pumpkins aesthetic as a whole. The middle passage feels like something that Corgan could have written for Siamese Dream or Gish, but the flourishes of piano and its acoustic denouement shape it into something grander, something closer to what Corgan probably envisioned the whole album sounding like.

We need a bridge between the two halves of this album, and there’s no better way to transition from straightforward rock to the weirder stuff than this. The way it takes Corgan’s personal insecurity and heartbreak and turns it into a sweeping epic exemplifies all of his best qualities as a songwriter. Easily the best Smashing Pumpkins song that wasn’t released as a single.

There is absolutely room on this version of Mellon Collie for both the prettiest song on the album and for Corgan to do his folk-singer thing, a side better known to audiences through his cover of “Landslide.” This is far, far better than that cover, and it allows him to be vulnerable in a way that his songs often disguise through layers of guitars.

It always bothered me that this didn’t start the album, and for this re-worked vinyl pressing, it gets to start a side. Really, few songs grip you so immediately the way its sharp, dramatic orchestral opening does. Once again, Corgan effortlessly captures a sort of adolescent melodrama, recounting his own difficult upbringing into something cinematic. The video still holds up, too.

There are a lot of weird artistic diversions on Mellon Collie that get lost when considering the whole bloated project. This is one of the best, something sweet and romantic while also being utterly baffling. Sometimes, Corgan’s indulgences could be infuriating, but “Cupid” is an example of how charming the man could be when he let his more whimsical side take over.

Corgan describes this as a love song, and nothing more. He’s right in suggesting that it’s fairly simple, but it’s so gorgeous and well-constructed that it more than merits inclusion. Sometimes a song just has to be, well, beautiful to be worthwhile.

Is it dream-pop? Is it shoegaze-adjacent? Whatever it is, this is a brilliant example of Corgan using his vulnerability to create something compelling. The lyrics hint at tragedy, or perhaps a sort of despondency, but Corgan seems at peace, willing to deal with whatever life throws at him.

Anyone who tells you that this isn’t one of the best songs of the decade and the best song that Corgan ever wrote is either a liar or a contrarian. This is Corgan synthesizing the more experimental side of Mellon Collie into his knack for writing big, poppy hooks, and the result is absolutely transcendent. I keep waiting to get sick of this song, but that day never seems to come, and I pray it never will.

Another moment of whimsy from Corgan, although this one comes with a more sinister edge than “Cupid.” Even so, the levity of the arrangement works well as a palate cleanser following the emotional nature of the previous two songs, and it’s still one of the album’s most unique moments.

So often, we think of Smashing Pumpkins as the work of one man, and Corgan is responsible for so much of what the band did and continues to do. But bands are collaborative efforts, and this final song (co-written by Corgan and Iha) feels like an acknowledgement and tribute to the people who made this ambitious project happen. I tweaked so much about this album while writing this, but the band had it right by making this the closer.

“Mellon Collie and the Infinite Sadness”

This pretty instrumental doesn’t have a lot of substance, and having it open the album is one of the more pretentious choices the band made.

Yes, this is one of the band’s most popular songs, but its combination of fairly limp aggression and some all-time lyrical clunkers from Corgan make it memorable for all the wrong reasons. Try listening to it now, and if you can hear the line “Despite all my rage/ I am still just a rat in a cage” without cringing, you’re a stronger person than I am.

This is the first of a few songs here that I actually like and think are good, but just don’t fit in with the album I’ve created up top. It’s a fine song, but the relatively slow pace doesn’t work with what does make the cut. Would’ve been a good B-side, though.

The title alone should disqualify it, and the song itself isn’t much better. This exemplifies the problems with Corgan’s more aggro, metal-leaning songs: the layers of guitars and drums disguise what ends up being a pretty flat song.

Musically, this would have worked better on Adore; its mix of guitars, electronics, and glitchy vocal effects fit in more with that album’s more overtly goth overtones. Lyrically, it fits in with a lot of the worst Mellon Collie songs in how it seeks profundity in cynical, adolescent Barnum statements. “Love/ It’s who you know” is the sort of line that sounds deep as shit when you’re 14 and really dumb when you’re 30.

“Porcelina of the Vast Oceans”

The other extended epic on the album, this is also the more underwritten of the two. Corgan has spoken frequently about how much his love for the Beatles influenced the making of this album, and “Porcelina” feels like an attempt to ape side 2 of Abbey Road and stitch some loose fragments together into a song. Unfortunately, it doesn’t quite work.

James Iha is a perfectly talented guitarist who has never been a great songwriter, and he REALLY wasn’t a great songwriter in 1995. There’s a reason this song almost never gets brought up by Pumpkins obsessives.

No, this song is not about Courtney Love. Even if it were, that doesn’t mean it isn’t just another alt-metal slog that indulges almost all of Corgan’s worst artistic impulses.

“In the Arms of Sleep”

Another song that’s decent but just doesn’t fit, “Sleep”s neo-psychedelic folk-rock barely fit in with the rest of the original Mellon Collie. Still, the song has its charms.

“Tales of a Scorched Earth”

This is just pure aggression, layers of distortion and double-kick drums meant to overwhelm the listener. It can be powerful in the moment, sure, but it would be better if there was a song underneath all of that.

“We Only Come Out At Night”

This came closest to making the cut; it’s weird and whimsical in the way that “Lily” is, and it’s almost as good.

There isn’t much to say about this one. It’s pretty, but it’s maybe a little too long and kind of boring. I don’t think anyone will miss it.

Listen to Kevin’s resequenced version of Mellon Collie and the Infinite Sadness here: