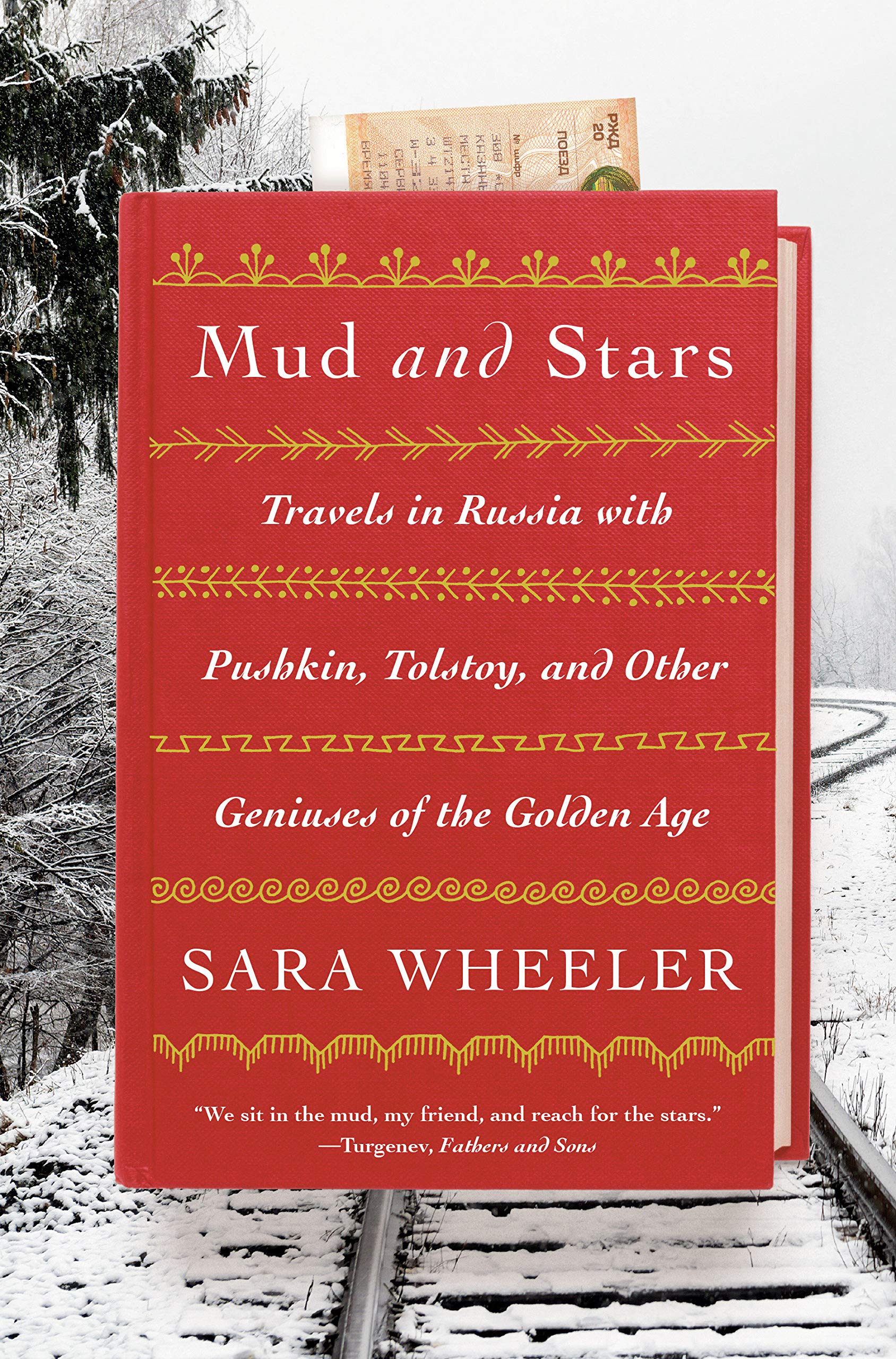 Despite the long, descriptive title for her latest book, Mud and Stars: Travels in Russia with Pushkin, Tolstoy, and Other Geniuses of the Golden Age, Sara Wheeler covers even more territory than that. She embarks on a dedicated journey of literary tourism in Russia, reflecting on the biographies and literary creations of authors including Pushkin and Dostoevsky as well as their continuing influence on Russian culture. She informs the reader about Russia past and present, while also describing her own experiences as a tourist.

Initially, this sounds like an ambitious project, further complicated by a comment Wheeler makes in the introduction: “I worked on the project with great pleasure for two years, until a crisis overtook my personal life. I became a former writer.” When she returned to her stacks of notes and books related to Russia, the project helped revive her, giving “form to the vanished years.” A well-seasoned reader of contemporary memoir might read this as a trope for setting in motion a book that has crisis, healing and recovery as its underpinning. But no, that is the extent of Wheeler’s explanation.

Even without a personal crisis in the storyline, Wheeler braids together various other threads. If the note in the introduction informs the book’s structure, it would be the expectation that there will be pieces of narrative from several trips to Russia, along with stories about her Russian studies in London, as well as the histories of each of the Golden Age writers she studies. The collaging of these different subjects can lead to sudden and confusing jumps. These structural concerns seem to be resolved in later chapters, but that resolution may also be a matter of gaining familiarity and comfort with Wheeler’s style. In her chapter on Mikhail Lermontov, for instance, she clearly transitions from a discussion of the poet’s travels with his grandmother to her own travels with her sons, specifically saying their adventure’s purpose is to find Lermontov. For the reader who lacks familiarity with Russia’s geography, these explicit explanations help alleviate distractions.

Wheeler also often assumes the reader’s familiarity with both Russian literature and Russian culture. That informed reader may find her prose more descriptive and meaningful; the less informed reader may feel left out of the narrative as one would an inside joke. An analogy would be in Wheeler’s visit to Lake Proval, home to the fictional Soviet-era character Ostap Bender. Bender is the protagonist of The Twelve Chairs, a novel penned by Ilya Ilf and Yevgeni Petrov. She notes that it was “significant that there was no sign at the statue—Bender is too familiar to require explanation.” What are the expectations for the tourist’s knowledge, and who determines the need to know?

There are idiosyncrasies to every writer’s style, and as one becomes accustomed to Wheeler, her dry British sense of humor begins to shine through. This is evident in her historical narratives as well her adventures in traveling around Russia. Like many of the Russian guides and language teachers she works with, Wheeler’s humor can be both subtle and cutting. In her chapter on novelist Nikolai Gogol, she enrolls at the Grint Institute in the Vykhino district in Moscow. Recalling the dismay expressed by her Russian instructor in London that she would choose to study there, Wheeler adds: “A comment on the Internet said it was ‘the most unpleasant and dysfunctional district of Moscow.’ At this news, my spirits rose. But it wasn’t that bad.” Here Wheeler also alludes to a theme that runs through the book: on her trips to Russia, locals typically told her how dreadful life is in their homeland. Her experiences confirm this misery, as do the historical narratives, often saturated with suffering and physical and mental illness, that she includes in telling the stories of the Golden Age writers.

Inevitably, Wheeler cannot avoid including Vladimir Putin in her story, especially in recounting her visit to Sochi, home to the 2014 Winter Olympics, a prime example of the corruption that has plagued Russia and, previously, the Soviet Union for generations. She does not spare her feelings about Putin, nor does she mince words about any of the oddities she encounters. Mud and Stars works at its best in drawing together the atmospheres of past and present, literature and language, as well as Wheeler’s distance from and affection for Russia’s great writers.

What Becomes a Legend Most: by Philip Gefter