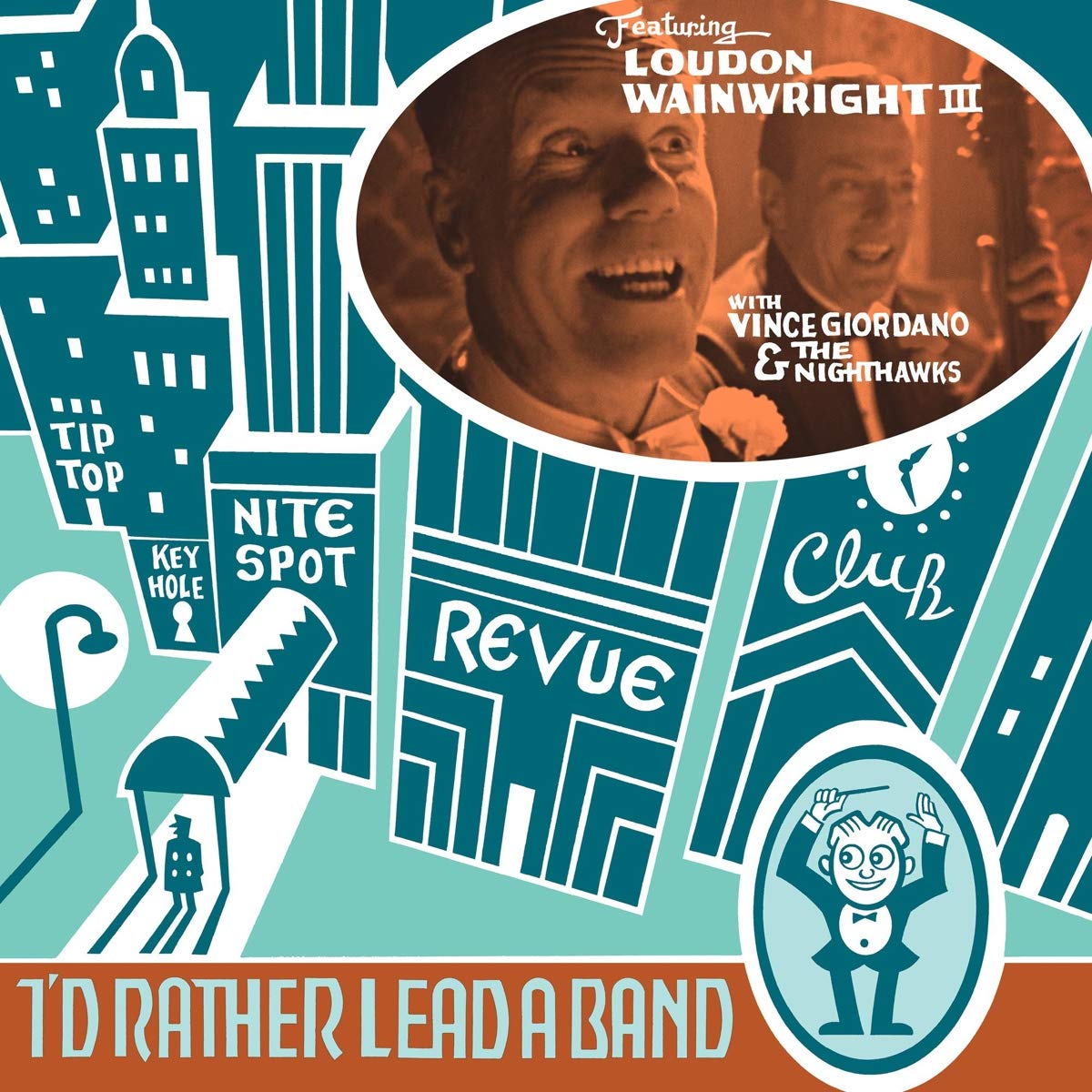 I’d Rather Lead a Band finds erstwhile acoustic guitar-slinging troubadour/singer-songwriter Loudon Wainwright III doing exactly what the name suggests: ditching his usual compositional and instrumental approach in favor of big band/trad-jazz context, fronting Vince Giordano’s group, The Nighthawks. It’s not all that far removed from 2009’s Charlie Poole-focused release, High Wide & Handsome in terms of the era encompassed, but it represents a rather sizable move away from his generally acoustic guitar-based albums and again finds him working as an interpreter of the work of others. And while he has shown in the past to be adept at being a cover artist, his specialty has long laid in his ability to transcribe his own personal pain and hardships —often with amusing results — into affecting folk songs.

Of course, being known for a very specific aesthetic — and being expected to continue operating under said guise – can ultimately feel creatively confining. After more than half a century singing and performing in what he’s deemed his “somewhat misanthropic, occasionally goofy persona,” it’s understandable why he might want to take a break and try something just a little bit different. Given his age and generation, he’s ripe for venturing into the Great American Songbook phase of his career. And so, six years after his last release, Wainwright elected to do just that, ditching his guitar and own songs to moonlight as a vocalist tackling songs from the ‘20s and ‘30s that, at least thematically, fall within his proverbial wheelhouse.

Richard Rodgers and Lorenz Hart’s “A Ship Without a Sail” fits within Wainwright’s lyrical sweet spot, playing the forever underdog at life and love. Given the events of 2020, the song’s opening line takes on a new, unintended, yet perfectly on-the-nose meaning entirely as Wainwright sings, “I don’t know what day it is/ Or if it’s dark or fair/ Somehow, that’s just the way it is/ And I don’t really care.” We’ve all no doubt felt this at some point during the past eight months of worldwide shutdown, and Wainwright’s delivery manages a wry smile, despite having been recorded a full seven months before COVID, social distancing and full-on quarantine became a daily concern.

Due to Wainwright’s rather limited vocal range — despite his best efforts to the contrary on “Ain’t Misbehavin’” — the tracks that work the best here are those that operate roughly within his established “misanthropic, goofy persona.” The amusingly blue “I’m Going to Give it to Mary With Love” sounds for all the world like a Wainwright tune in heart and spirit and thus fits in nicely with his interpretive ethos. It’s delivered with a wink and a smile, both audible in his voice and through the enthusiastic nature of the performance. The latter characteristic helps make the album as a whole an enjoyable enough listen, even at its weakest points.

That he’s backed by a band like The Nighthawks, a group that deftly apes the sound and feel of the era with ease, helps provide a comfortable, almost safe, atmosphere in which for Wainwright to strut his stuff as an interpreter of the Great American Songbook. Had he stuck to more familiar, less lyrically nuanced material, I’d Rather Lead a Band would be a bit of a tough pill to swallow, coming off as semi-ironic cosplay. Instead, he opts for slightly goofy, yet still heartfelt and more deceptively lyrically resonant songs like “The Little Things in Life,” “So the Bluebirds and the Blackbirds Got Together” (popularized by a young Bing Crosby with The Rhythm Boys) and the perfectly-titled “You Rascal You (I’ll Be Glad When You’re Dead).” It might musically be a step in a new direction for Wainwright, but I’d Rather Lead a Band remains wholly in keeping with the lyrical and thematic aesthetic the singer-songwriter has worked on establishing for himself since his career began more than 50 years ago.