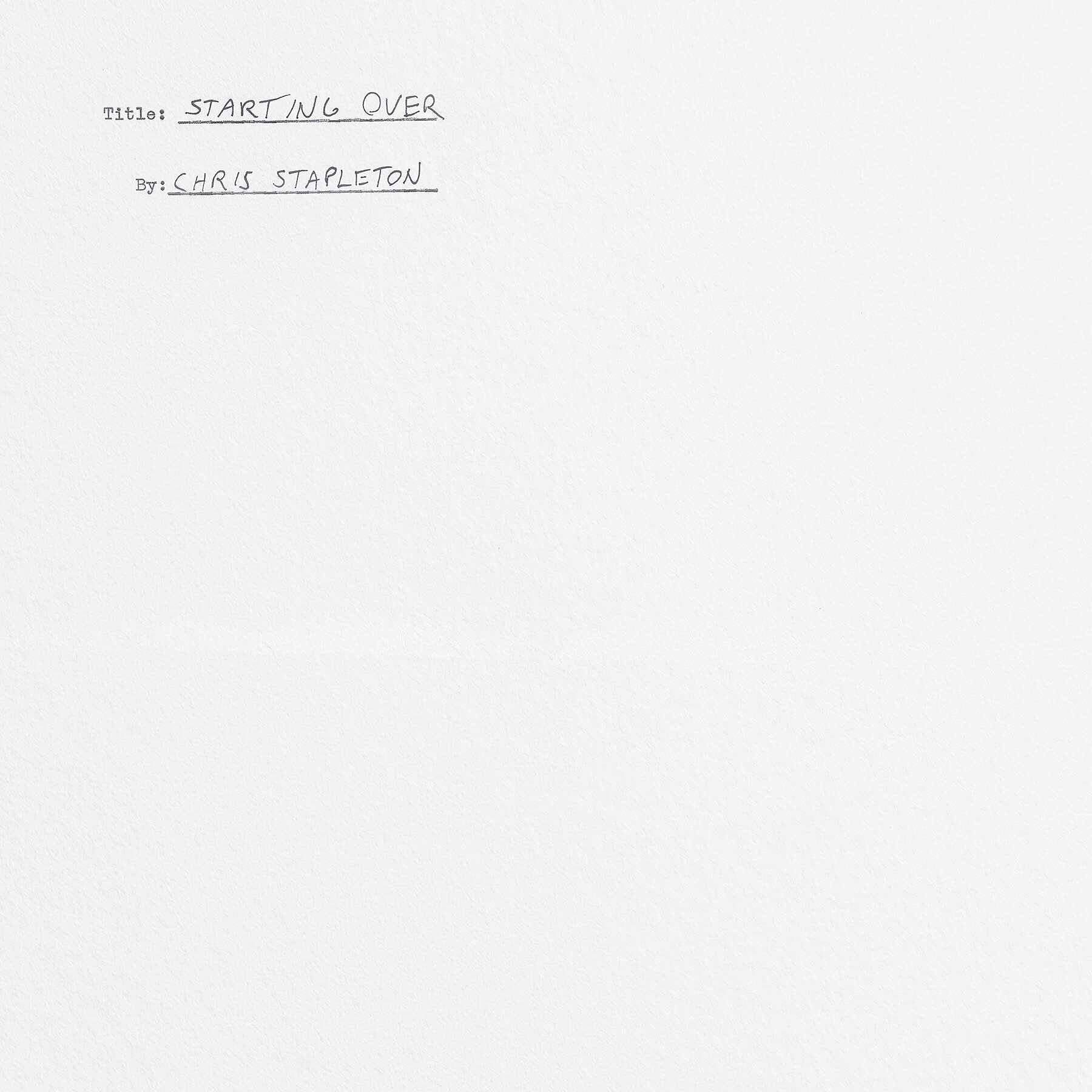 To label Chris Stapleton simply a country musician is something of a disservice as it limits the perception of him as an artist. And while it would be an easy shorthand to place him firmly within the growing stable of bearded dudes with a penchant for the past, that’s shortchanging his ability to not only channel his influences, but also write at a level comparable to theirs. With his latest release, Starting Over, Stapleton again shows that his respect within the industry across the board is well-deserved; he’s an unceasingly impressive songwriter who continues to operate at an otherworldly level and bold interpreter who can just as easily make someone else’s song his own.

And throughout, it’s all delivered with a workmanlike confidence that is so effortless as to make what, elsewhere and in lesser hands, would be borderline mind-blowing simply par for the course. His speaker rattling vocals chiefly among these, tend to get the lion’s share of the credit, but Stapleton is an equally impressive guitarist, illustrated throughout the course of the album on both acoustic and electric. Lead single and title track “Starting Over” is destined to become an overplayed classic, a future standard that sounds birthed somewhere in the early-‘70s singer-songwriter/outlaw country boom. It’s such a deceptively simple, instantly familiar song you wonder if it wasn’t been previously written by someone else, buried deep within some dusty grooves somewhere on a forgotten gem mouldering away in some suburban basement. Such is the hallmark of a song fated for immortality and entrance into the post-modern Great American Songbook of pop hits.

“Cold” benefits immensely from a string arrangement that calls to mind B.B. King’s “The Thrill is Gone,” particularly on the solo section wherein the strings double the guitar on several passages before continuing their melodic ascent. It’s a nice break from the usual instrumentation found on Stapleton’s brand on outlaw country/classic rock/bluesy soul, offering a slight variation on his well-established theme of guitar/bass/drums and vocalizations that range from the ruminative to a raspy, shouted growl.

Meanwhile, “When I’m With You” finds Stapleton effectively venturing into early outlaw Willie Nelson balladic territory. From the melody to the slow shuffling tempo to the laid-back guitar solo, everything about the track sounds artfully cribbed from Nelson’s early-to-mid-‘70s compositional playbook. And while that might sound like a bit of a backhanded compliment, it’s really more of an appreciation of how authentically he manages to ape his predecessors, to the point where it sounds like the product of several generations prior rather than that of the 21st century.

And to show that he’s not simply aping the basic aesthetic tenets of his biggest influences, he tackles a handful of covers on Starting Over, including two by the late, great Guy Clark (“Worry B Gone” and “Old Friends”) and John Fogerty’s “Joy of My Life” from the latter’s 1997 album, Blue Moon Swamp. Somewhat ironically, the track immediately preceding Fogerty’s ballad is the rip-roaring rocker “Arkansas” which sounds for all the world like Stapleton doing his best CCR-era Fogerty, all strangled syllables and “Travellin’ Band”-barking rasp. It’s one of a handful of nods to classic rock that includes the addition of two members of Tom Petty’s Heartbreakers, keyboardist Benmont Tench and guitarist Mike Campbell, the latter contributing writing credits on the aforementioned “Arkansas” and “Watch You Burn.”

The addition of Tench and Campbell to Stapleton’s team of gritty country rockers is a fine fit, not least because of his clear admiration for the likes of Petty and the Heartbreakers and other stalwarts of classic rock that seeks inspiration in the same well as Stapleton. Tench’s presence on eight of the album’s 14 tracks helps flesh out the sound and lends an added level of authenticity to Stapleton’s brand of classic rock-referencing Americana. Indeed, it becomes a game of spot-the-reference, perhaps unintentionally, throughout. The descending riff in “Hillbilly Blood” sounds more than a bit like that of the Beatles’ “Helter Skelter,” while his read of Clark’s “Worry B Gone” cranks up the decibels and adds a Chuck Berry-esque gallop that transforms the song into something wholly Stapleton’s own.

Starting Over may be a bit of a misnomer – there’s nothing here indicative of Stapleton rewriting his already massively successful and well-regarded playbook – but it nonetheless is another solid entry in what is proving to be an increasingly impressive catalog from an artist as comfortable with his own material as that of his idols. That he manages to seamless blend the two shows Stapleton is well on his way to joining them.