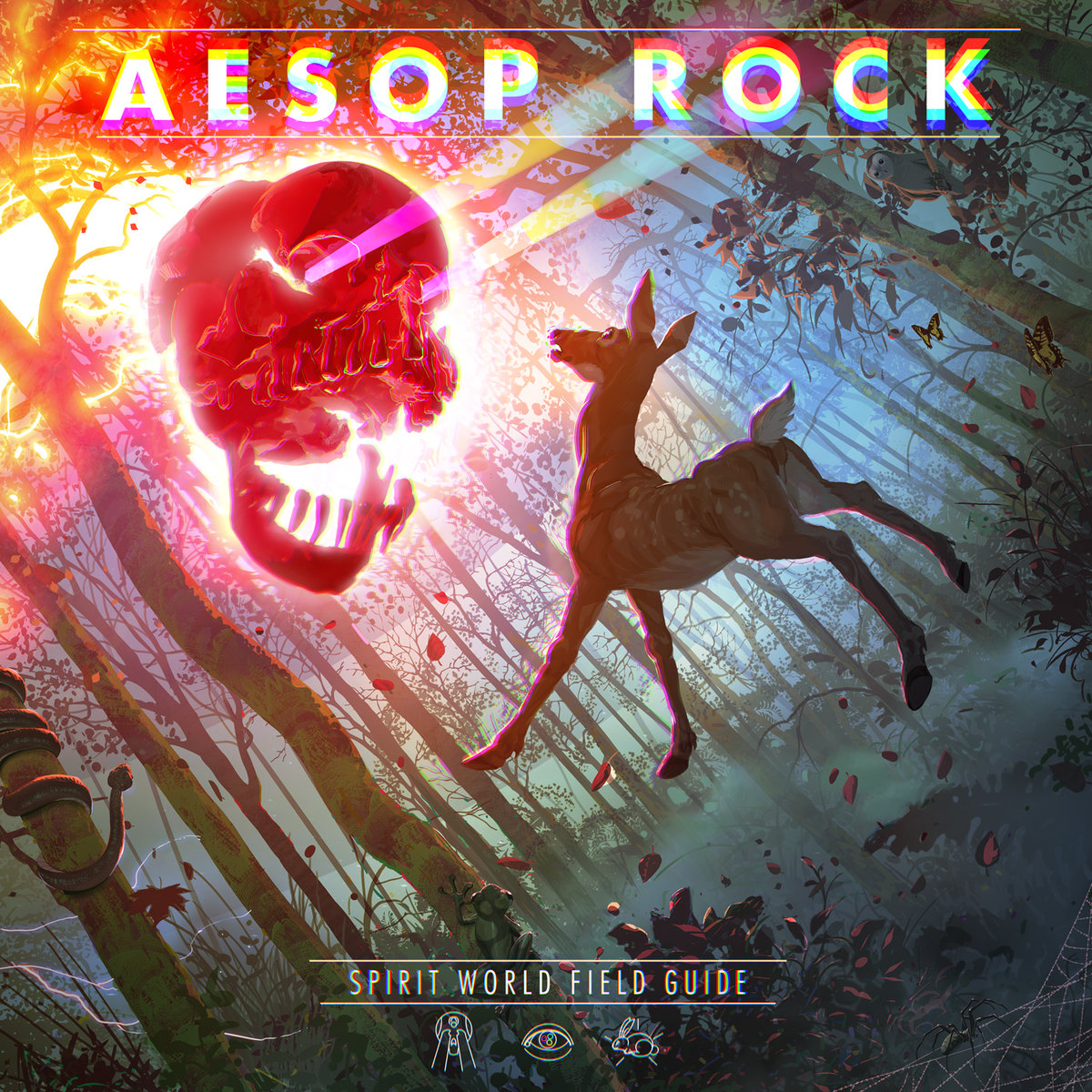 Almost two years after his collaborative project with electronic artist Tobacco, underground hip-hop artist Aesop Rock has made somewhat of a return to form on Spirit World Field Guide. Not to say that last year’s Malibu Ken and 2016’s The Impossible Kid weren’t true-blue Aesop Rock projects, as they undeniably were. But something that those albums had that was out of the ordinary for the Portland-based rapper was accessibility. Within one or two rotations, the listener could be trusted to have an idea of the subject matter, even with the artist’s non-stop esoteric bars.

While the verbose lyrical abilities and freaky instrumentals are to be expected, Aesop Rock is here trying his hand at a concept album. For the intro, he recites a spoken word disclaimer production that sounds straight off of a Nintendo 64-era Rareware game soundtrack. While this helps to contextualize the Field Guide as a deep dive into the unknown, his awkward delivery and the bloated length makes it an eventual skip on subsequent listens. It may have worked better as a shorter instrumental intro to set the atmosphere for the rest of the album.

The first leg of Spirit World Field Guide stands as the weakest, with the first batch of tracks blending together in terms of production and energy. The beats aren’t identical, but by the time the album is over, they feel interchangeable. The content comes at you in a dense tidal wave of references, metaphors and analogies, as if Aesop Rock is making inside jokes, and the only person who gets it is himself. For some diehard fans, this is exactly what they want from him; It’s a Rubik’s cube of obscure language that becomes just a bit more pieced together with each listen. Unless you fall into this niche, it is a daunting task that at times seems like more of a chore than it is worth.

“Pizza Alley” marks a clear change of pace, and represents the best aspects of Spirit World. It details an enlightening excursion to Peru that Aesop Rock made in 2017. Instead of serving as a linear story, his experiences are depicted as a kaleidoscopic trip with glimpses of a foreign culture laced into each verse. It has a sense of loose cohesiveness that is lost in the earlier tracks.

The dramatic production creates a cinematic intensity akin to something like “Acid King” from Malibu Ken. Not every song follows this format, but the album maintains the high bar set after this point. Aesop Rock opted to throw in short segments in order to convey ideas that don’t necessarily require entire songs, but this is bittersweet, given the fragments have some of the most intriguing ideas on the whole project. “Flies,” a single-verse track with spacey production reminiscent of El-P’s work on The Cold Vein, is about fruit flies pestering Aesop Rock in his house after he left some food out for too long. Its brevity stands out and provides time to breathe between the grander songs here.

At over an hour long, Spirit World Field Guide is not served well by the middling pace that Aesop Rock has adopted on almost every song. It’s hard to justify the length of this project. The quality is consistent, but sitting through that much rap where every line needs deciphering can be exhausting, especially when the tracks start to blend together.

Spirit World Field Guide is impressive, but it’s nothing too out of the ordinary for the Portland, Oregon-based artist. Aesop Rock should continue to appeal to fans, but his latest isn’t likely to attract many new listeners.

The shoegaze-tinged alt rock of their debut is the sound that put the group on the map, bu…