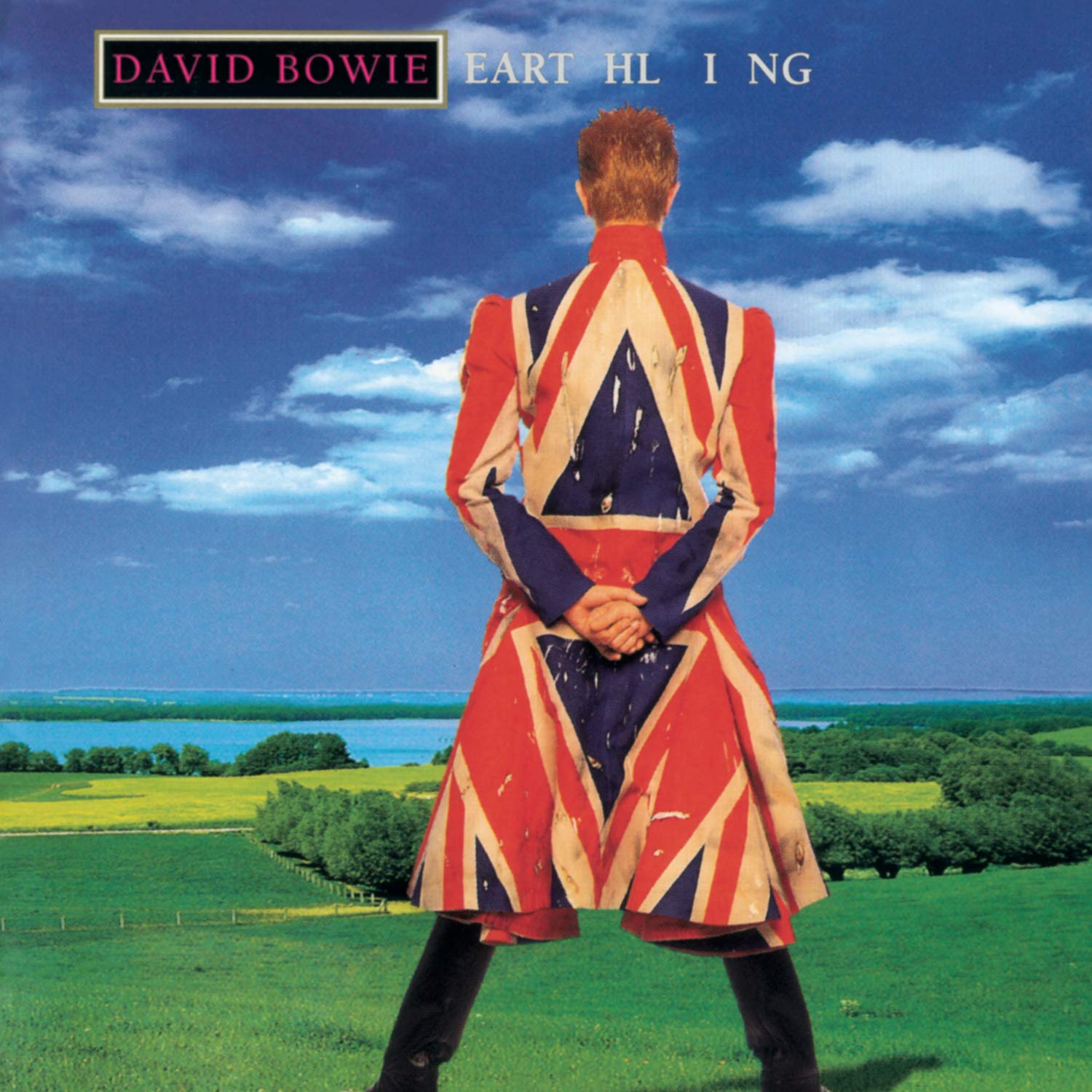 Having rejuvenated himself with 1. Outside, David Bowie tried to strike again while the iron was hot, conducting recording sessions within days of finishing that album’s tour. Crafting riffs and loops, Bowie and his musicians quickly started to assemble music without clear purpose, not unlike the early sessions for the last record. Still enamored with prevailing trends in electronica, Bowie and Reeves Gabrels doubled down one the sound they had forged over the last few records, with the biggest changes being more explicit debts to huge crossover acts like Underworld and The Prodigy.

As such, Earthling lacks the immediately overwhelming sensation of its predecessor; running at single-LP length and more sonically focused, the album feels more like something crafted for the pop charts than to reestablish Bowie’s artistic credibility. Opener “Little Wonder” sounds like every charting electronic track of the mid-’90s: rooted in a sample of the Amen break drumbeat, filled with teeth-grindingly loud and atonal industrial squelches, with only Bowie’s deadpan and the occasional, shoegazy squall of guitar to offer a pleasant offset. With nonsense lyrics that flit through the seven dwarfs of Snow White lore (and a few new ones, like Stinky), this sounds like Bowie on autopilot, pleasing but dispensable.

It’s not the only time the record gets bogged down in the sense of treading cultural water. “Telling Lies” is jungle of the kind that was already becoming obsolete as the genre’s sinewy menace was rapidly terraforming into brash liquid dnb. Gail Ann Dorsey’s gurgling bass gives the song personality, but the lurches into more rock-oriented chorus breaks feels less like a synthesis of styles in the best Bowie sense than an awkward mash-up. “Looking for Satellites” has the stumbling, undanceable rhythm of so many rockstars who turned to synthesizers and samples in the ‘90s, a collection of beeps and whistles that recalls U2’s ironic period at its most instantly dated.

And yet, Bowie is still Bowie, and more often than not he and his cohorts wring something strange and beautiful from their influences. “Battle for Britain (The Letter)” gallops out of the gate with a drum ‘n bass sprint but quickly brightens into neo-psychedelic bliss with chiming guitars and an industrial buzz that feels as uplifting and wistful as caterwauling and intense. There is even, hilariously, a sudden drop into barroom piano as noise continues to swell, as if someone did a remix of ragtime. Lyrically, the track is an impressionistic tribute from a British expat to his abandoned homeland, and the repeated refrain of “Don’t you let my letter get you down” almost sounds like an apology for his absence. “Seven Years of Tibet” cribs the click track from Nine Inch Nails’ “Closer” but lays over it a smooth wash of keyboard tone clusters and elegant guitar fills. “Dead Man Walking” is at once generic and thrilling, a work of festival trance that stretches for more than seven minutes of wobbly synth lines and mosh-worthy breakdowns.

The best moments come toward the end. The sardonic single “I’m Afraid of Americans” both is and isn’t political. As Bowie himself said, it wasn’t intended as overtly hostile, yet it’s still a broadside against American consumerism expanding into globalism in the post-Cold War era, a time seemingly filled with peace prior to 9/11 yet still defined by a kind of expansionism. “Johnny’s in America, Johnny looks up at the stars/ Johnny combs his hair and Johnny wants pussy and cars,’ he drawls over the album’s most crushing industrial beat. And when he ends with the repeated refrain of “God is an American,” he makes a nationalistic boast sound ominously apocalyptic. Closer “Law (Earthlings on Fire)” is even better, sounding at first like a lost Killing Joke song before it is punctured by a cascading, watery synth that sounds so current that it bears a suspicious resemblance to Pearson Sound’s 2016 post-dubstep classic “XLB.” Bowie’s molly-fried chants reduce his cut-up lyrical technique to hooligan shout-alongs, and one gets the sense he could have taken Glastonbury 2000 by storm as much with contemporary tracks like this as he did a tour through his greatest hits.

If Earthling sounds the most dated of Bowie’s mid-‘90s revival, that can largely be attributed to the fact that all of its sonic touchstones were rapidly aging by this stage. Drum ‘n’ bass itself had already lost much of its dark, fluid energy in the face of mainstream breakthrough, transitioning from a complex, jazzy expression to mere speed and sound; similarly, industrial rock had been so thoroughly cannibalized that the tattered rock scene was rapidly moving toward nu-metal. Bowie, pop’s greatest synthesist, found himself face to face with a spiraling industry implosion in which seemingly every major sound would hit the wall by the end of the decade. Still, the album remains one of his most energetic, a collection of straightforward, intense pop that proved he was still eager to create as he entered his fourth decade of recording.