March 05, 2021
Home Books The Ministry for the Future: by Kim Stanley Robinson 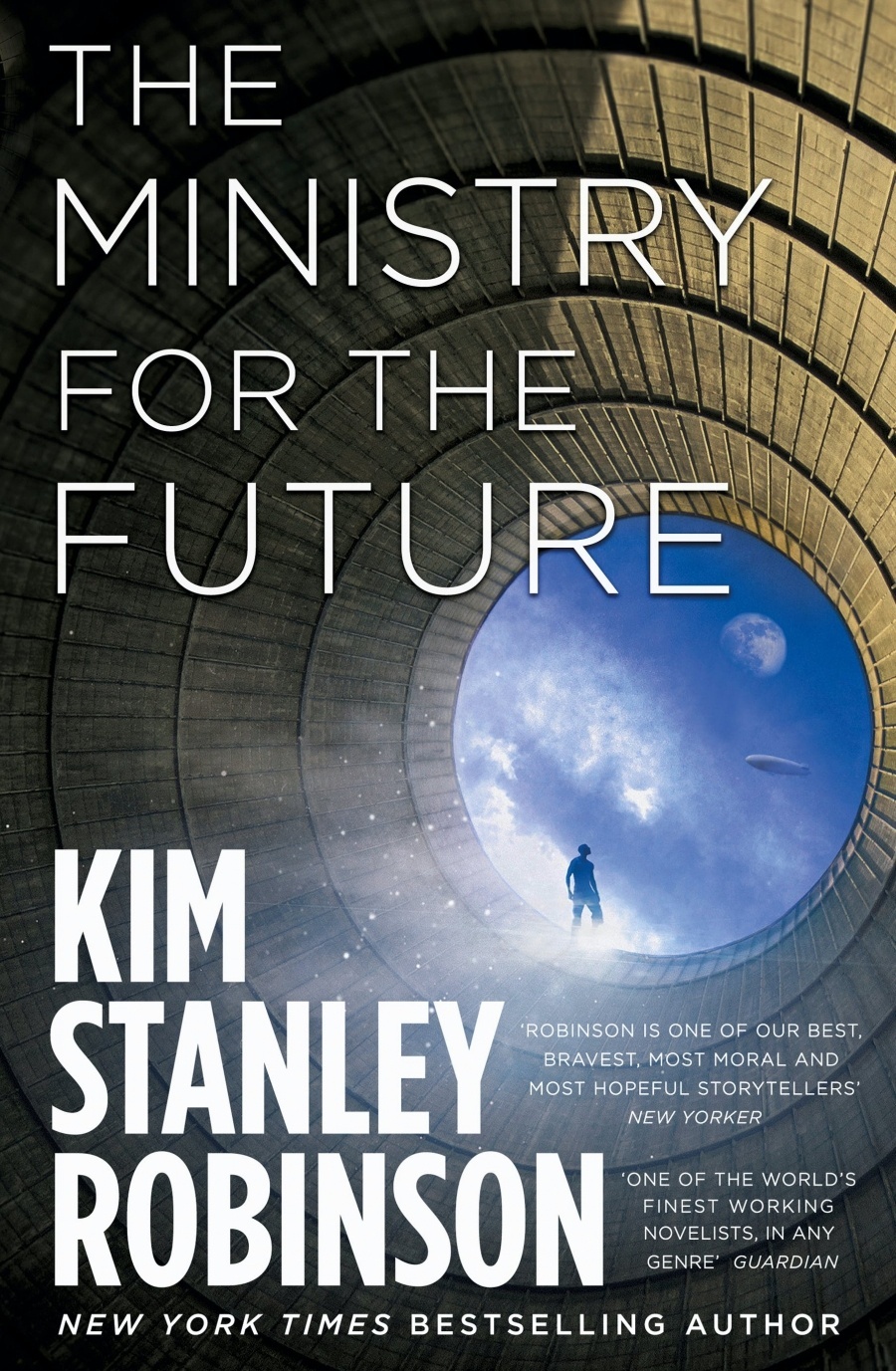 Kim Stanley Robinson has described his latest novel, The Ministry for the Future, as a best-case-scenario for the climate emergency over the next few decades. It begins with a brutal, bracing chapter describing a speculative – but all too possible – heat wave that kills 20 million people in India in a few days. Hardly optimistic, but Robinson has seemingly taken up the oft-repeated phrase “it is easier to imagine the end of the world than to imagine the end of capitalism” not as a truism, but as a challenge.

There are no heroes in The Ministry for the Future, not in the traditional sense. There are hardly even protagonists. The opening chapter introduces us to Frank, an American aid worker who survives the heat wave with a severe case of PTSD. Soon after, we are introduced to Mary, the Irish head of the underfunded and toothless (and fictional) UN agency that gives the novel its title. Their paths are divergent: as Frank descends into paranoia and depression, Mary guides her feckless agency through the aftermath of the inciting cataclysm. But they meet one night when Frank, in an attempt to do something – anything – to make sure the massacre he witnessed is never repeated, takes Mary hostage in her home in Zurich.

Robinson returns to this pair frequently over the course of the book, checking in on their strange, evolving relationship, which by the end becomes a kind of friendship. This is, on the surface, the most conventional aspect of the novel: these two people, living their very different lives, trying to make the world a better place. But this is not, thank God, a story about Frank dealing with his trauma, or a Sorkin-esque tale of high-level bureaucrats doing their best and proving that the system works. These characters have little interiority, contra the conventional bourgeois novel, but they do share a defining feature which separates them from other figures in the book: ineffectuality.

Frank’s turn to extremist methods is brief and the consequences of that action force him to take up more humble work. Mary, although the head of a vast agency dedicated to saving the world, is shuffled from boardroom to boardroom, politely asking bankers to stop incentivizing the destruction of Earth, all the while relying on a “black wing” of her organization – over which she exercises no control so as to maintain plausible deniability – to do the difficult work of effecting change. There is no savior narrative to be found.

The story of Frank and Mary takes up only a quarter of the nearly 600-page book. And this is where the novel is most daring and lively. Robinson’s short chapters take myriad forms: Socratic dialogues, mini-lectures, short stories, oral histories, prose poems and encyclopedia or dictionary entries. As one of the latter sections puts it: “There is a real situation, that can’t be denied, but it is too big for any individual to know in full, and so we must create our understanding by way of an act of the imagination.” The formal inventiveness of the book is just such an act of imagination. Experimental by both “literary” and “genre” standards, the experiments aren’t always successful – the prose poems have the worst hit-to-miss ratio – and will certainly try the patience of any reader expecting a traditional focus on character or plot.

But The Ministry for the Future isn’t experimental for its own sake. There is a brilliant marriage of form and content here. Like his approach to narrative, Robinson’s speculations on our struggle against climate change are multifaceted. There is no one weird trick to reduce the carbon-load of the planet and undo the effects of industrialization. Instead there are thousands: eating less meat, using less electricity, more solar panels, ending travel by airplane, keeping coal and oil in the ground, establishing a global carbon-currency, rewilding, habitat corridors, geoengineering, basic income, jobs guarantee, universal healthcare, humane and just refugee resettlement, urbanization, peaceful protests, Keynesianism, Modern Monetary Theory, socialism, communism.

One of the hallmarks of so-called “hard” sci-fi is the way it often brings the narrative grinding to a halt for bald exposition: “here is how this complicated spaceship works” kind of passages. These can be interesting, even poetic in the right hands, but the problem with this strategy is, first, a logistical one – why does this thing need to be explained to the characters who live in this world – and second, an aesthetic one – why explain something in minute detail rather than suggesting its broad shape, thus engaging the reader’s imaginative power. But in applying that approach to, for example, contemporary economics, Robinson solves these problems. The immediacy of understanding this issue is self-evident to both the characters in the book and the reader holding it, who are, after all, only separated by a few years and a few what-ifs.

Some of the solutions presented are goofy in their simplicity – in response to rapid glacial melt and movement, scientists drill thousands of wells to pump water out from underneath the ice and allow it to refreeze on top – and others will probably look dated in another decade – there is a lot of blockchain nonsense, here, and an attendant weird, centralized social media/credit union. And as the novel goes further in the future, Robinson is smart enough to get a little vague about the specifics, even as he spices things up with a proliferation of zeppelins and sailing ships that use massive solar-powered sails.

Ultimately, Robinson isn’t in the business of prediction. Still, his bet that China and India – especially his several mentions of the communist-run state of Kerala – will play an outsized and influential role in responding to the ecological crisis looks to have panned-out in the global stress-test of COVID. But that isn’t a hard bet to make given that nearly half the population of the planet live in those two places. Ditto his assumption that the United States will continue to alternate between liberal cowardice and reactionary revanchism while everyone else gets their shit together. Same as it ever was.

Robinson’s openminded, reformist approach to climate change might raise some objections. The taming of capitalism’s worst impulses by inverting the financial incentives for exploitation is the most fantastically utopian thing about the book, and a scene late in the novel where a few hundred small-town Americans are forced to relocate to the city could easily become the cornerstone of a monologuing Fox News host’s fever-dream. But the former is at least achieved after a whole lot of economic explanation (and the Chinese replacing the U.S. as the ones steering global finance) – and the latter makes up one of the most moving passages of the novel, as folks spend one last night in their hometown ruminating on the genuine value of their way of life, realizing that if they don’t leave it behind for now, they’ll be the last people to ever enjoy it.

What will certainly raise objection is Robinson’s full-throated endorsement of “environmental terrorism” as not just one of many strategies, but the strategy that makes all the others possible. It is the most courageous and boldest aspect of the book – to reject it is to reject the core of Robinson’s optimism. The book speculates that it will be necessary to explicitly target and terrorize the specific people and industries most responsible for the warming climate. These tactics range from industrial sabotage, to kidnapping to assassination. He doesn’t name names, but it is hard to imagine that Jeff Bezos would make it to the end of Robinson’s book.

While there may be no singular hero in The Ministry for the Future, the Children of Kali are the group that come closest to occupying this role. Like Frank, they are survivors of the heatwave, but unlike Frank, they have the discipline and selflessness to pursue the extreme measures that extreme times call for. They know that the people who are killing the world have names and addresses. They suggest that our problem is not that we are too scared, but that we are not nearly scared enough. If 20 million people a week die so we can continue to burn enormous amounts of jet fuel on business trips and vacations, then what’s a few planes blown out of the sky if it puts a stop to it? The novel is clear that it is only after putting the fear of death into the hearts of the powerful that they will come to the table and consider something as seemingly reasonable as a carbon offset currency. If our world is going to look anything like the one in the book – that is, if there is any hope at all for our children’s children – it will be due to people who realize we are in a war, and start acting like it.

I woke up a week or two ago with the absolute certainty that we – as in, the human species – were not going to do anything to stop the ongoing climate catastrophe. Not that we were incapable of it, just that we simply wouldn’t do anything. I live in a city where it isn’t unusual for the ground to be blanketed in snow once or twice over by this time of year. But instead, it was 75 degrees out. The feeling I had was less like dread and more like resignation – or dread twisted into resignation so that I could go on functioning, get some breakfast, clean the kitchen, etc. I went outside and enjoyed the weather. What else could I do? Nothing.

In the wake of this experience, Robinson’s book came not so much as a shock, but as a recalibration. It’s true: there isn’t anything you or I or any other individual can do alone to change our present course. Recalibrating your personal consumption, like casting your lone vote, is statistically meaningless. The task, then, lies in imagining and undertaking overlapping and various forms of collective action that confront, even violently, the people and systems responsible for the present state of things. The task lies, too – especially for those of us in the West – in recognizing that the most effective of these actions will probably come from elsewhere, might even be unrecognizable to us and will certainly be met with condemnation by our rulers and pundits.

We don’t know what the future holds, but it is going to require much more of us than sticking those dreadful “I Believe in Science” signs in our yards, or posting on social media or, even, writing a novel (or a review of one). In its best moments, The Ministry for the Future resembles the greatest American novel ever written – Leslie Marmon Silko’s Almanac of the Dead – and while it falls short of that revolutionary work, its ambition and scope are worthy of praise. There is a chapter that consists almost entirely of a list of environmental organizations that are actually existing, that span our globe as we find it today. It is sort of corny, but also powerful. A gimmick, but a moving one nonetheless. That chapter ends with this sentence: “There is no other world.” True, but we still have time to decide what this one looks like.

The Hearing Trumpet: by Leonora Carrington

The Hearing Trumpet, though coming long after the initial surrealist burst, carries the pr…